I recently came across this article, published in the respectable European Physical Journal A. (Apparently, there isn't any corresponding arXiv article for this, so I'm sorry if everyone isn't able to access the article.)

Here's the possibility that the author has suggested:

While looking for the putative Higgs boson of the Standard Model of particle physics, recently, the CMS and the ATLAS experiments at CERN have found strong signals of a new particle at about 125 GeV. ...

Here we show that what they may have found at 125 GeV is the long sought for and missing ingredient of the strong interaction: the sigma-meson of the Chiral Sigma Model, within the framework of the Skyrme model with a topological interpretation of the baryons. Just like a massless gauge boson is a requirement, and hence a prediction of the local gauge theories, in the the same manner, a very heavy scalar meson is a requirement and hence a prediction of the Skyrme model of the hadrons. The 125 GeV particle discovered by the CMS and the ATLAS groups may be an experimental confirmation of this unique prediction of the topological Skyrme model. However the bottom line is that even if the experimentalists finally confirm that this 125 GeV entity is the expected Higgs boson, then there still remains to discover another heavier scalar particle as the sigma-meson of the chiral sigma model/Skyrme model, which remains its unique prediction, as shown in this paper.

I appreciate that the physics community in general must be very confident that they have identified Higgs correctly (they wouldn't have awarded a Nobel prize if there was any doubt remaining).

The point is, while hoaxes keep sprouting up all the time, this is a well-sourced and peer-reviewed article. Does this possibility appear irrational for any definite reason? Especially since this $\sigma$ meson is still elusive?

Edit : Found another. This one is in Phys. Rev. D and incidentally carries the same name as my question title ! Here are the links - PRD Link, arxiv link

The most fool-proof way to confirm if the particle you found in an accelerator is what you think, is to check its decays to other particles. The production of particles from the 125GeV thing falls more and more closely to the Higgs expectations; existing deviations are generally ascribed to experimental difficulties in identifying some of the product particles.

(For the current status of the situation you can see the experimental summary of the electroweak session at the Moriond conference. [large file])

Quoting from the 2013 EPJA article:

Also the vector dominance model of the Skyrme model [6] would predict stronger gamma-gamma decays of the sigma-meson in our model, akin to what was observed by the CMS and the ATLAS experiments. Hence, clearly, these so-called anomalies are a clean signature of this new particle at 125GeV interpreted as the sigma-meson of the chiral sigma model forming the basis of the Skyrme model of the strong interaction.

While it was the case the central value of $\gamma\gamma$ decays with respect to the standard model prediction, many non-experimentalists were keen to ignore the uncertainties on those values, which were also large at the time. Alas, one does not simply draw such conclusions: 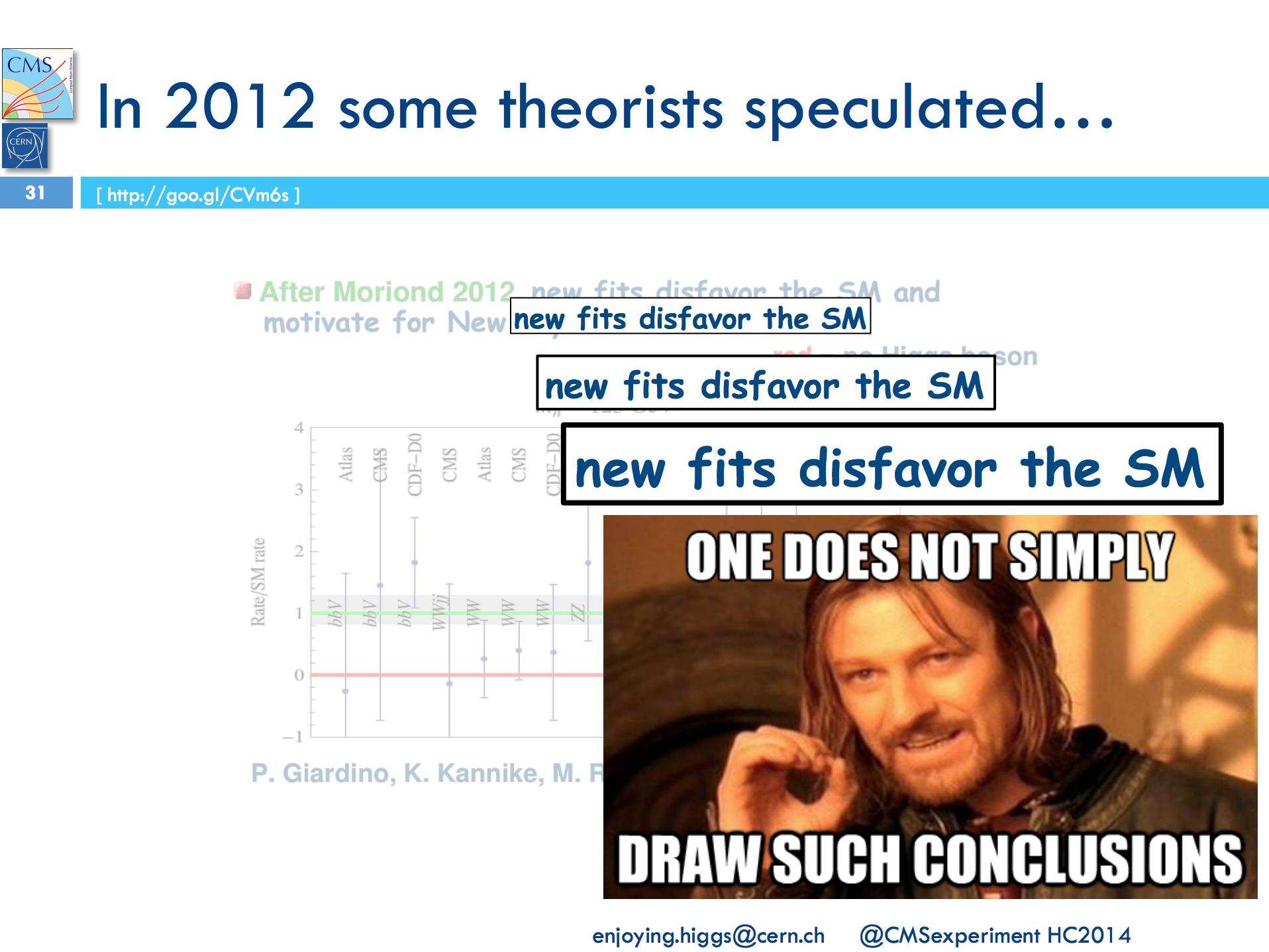 Since 2012 we have had many more of these 125 GeV particles to study and the most precise measurements from the ATLAS and CMS combined analysis show this 125 GeV particle coupling to every other elementary particle in the SM as predicted by the SM. The specific case of the coupling to photons is gauged by $\kappa_\gamma$ which can be seen to be compatible with unity, i.e. the SM prediction: 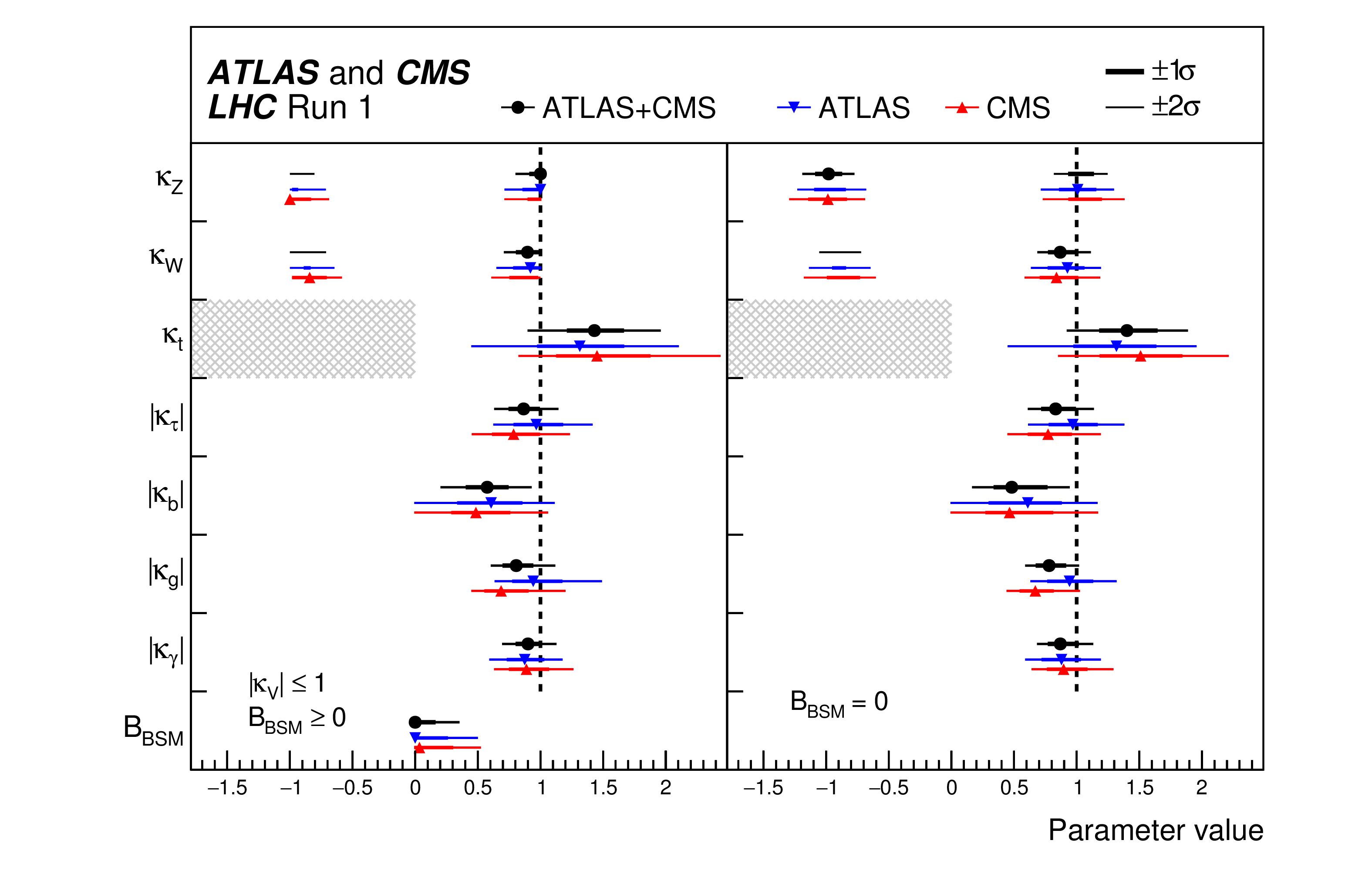 This can also be seen in the more general interpretation with separate production and decay modes; the top row is reports the $H\to\gamma\gamma$ decay in the different production modes exploited: 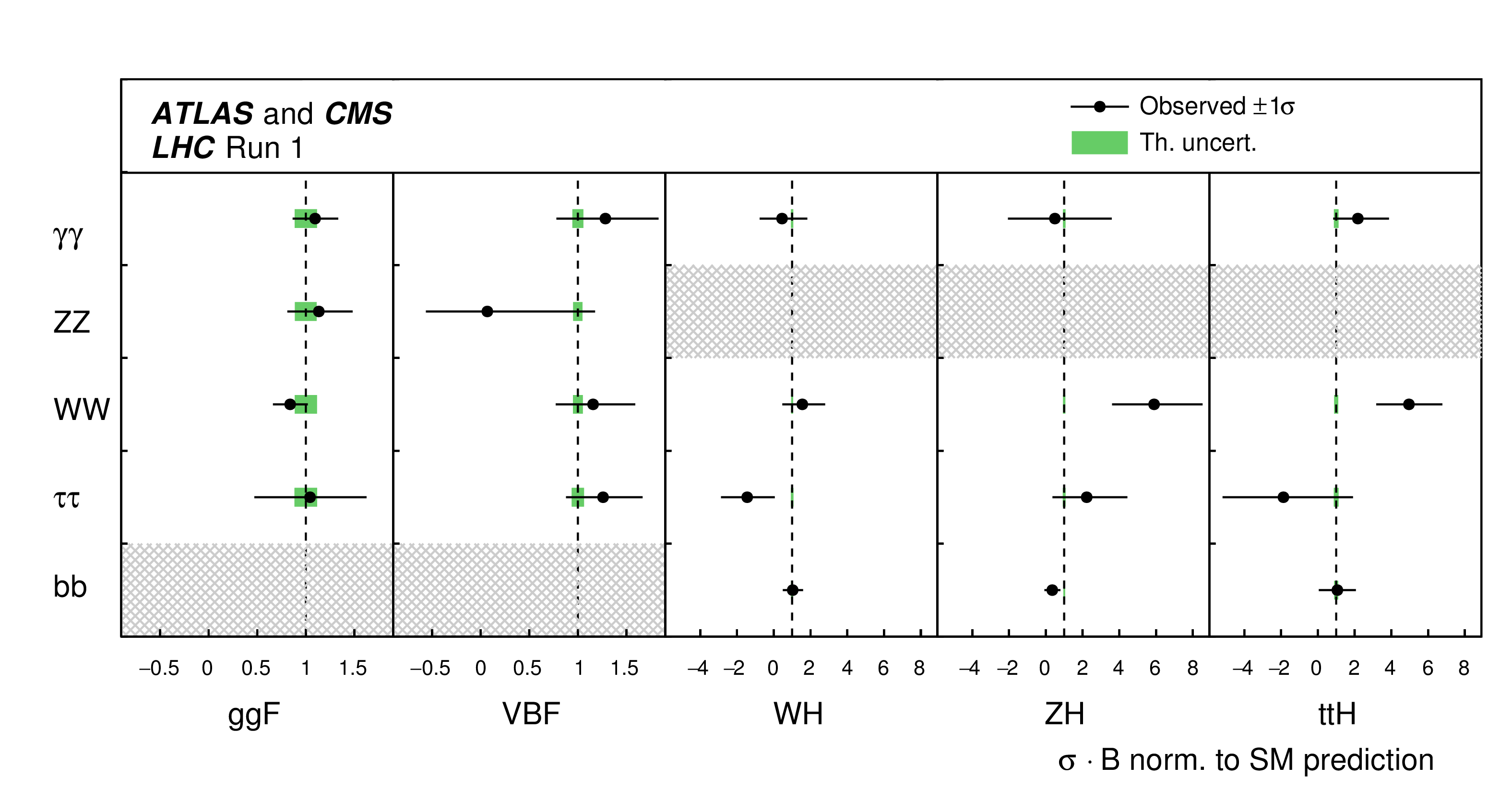 So, is it the SM Higgs boson? Up to now it's compatible with it in every way we have been able to probe. But we are still scratching the surface and have a lot of work to do in order to find the chink in this otherwise flawless armour.

Not the answer you're looking for? Browse other questions tagged large-hadron-collider higgs chirality sigma-models or ask your own question.

8
Where is the "true" Higgs if the LHC 125 GeV signal is rather a higher dimensional radion than a SM Higgs?
10
ATLAS Higgs Interpretation
12
Higgs Boson mass in Electron volts?
9
How do you find spin of a particle from experimental data?
5
Width of the decay of Higgs boson into dimuon
4
What's the recent released 750GeV particle's spin?
3
Identifying the Higgs boson at LHC
0
Higgs measurements at the LHC
0
Higgs self-coupling