But: I press with gravitation force on the ground so it should press with the same force on me, so if my mass is less than earth mass my acceleration should be greater as well but I am not moving (flying)?

Second: If small rocket(with small mass) pressure against bigger rock with greater mass the rocket should have greater acceleration towards direction opposite to its flying path so how the rocket can actually move the rock(towards left at picture where rock acceleration is small) and not the opposite(rocket acceleration at picture towards right is bigger)?
Edited
If a rocket with mass $m_{rocket}$ pushes against a rock with mass $m_{rock}$ with force $F_{thrust}$ the rock will push back with equal force (Newton's 3rd Law). The rocket will experience an acceleration $a_{rocket}$ in the opposite direction of $F_{thrust}$ and the rock will experience $a_{rock}$ in the same direction as the thrust. However, in this example $m_{rocket} < m_{rock} \therefore a_{rocket} < a_{rock}$
Why doesn't the rocket move in the opposite direction of $F_{thrust}$ since the rock has a greater mass? 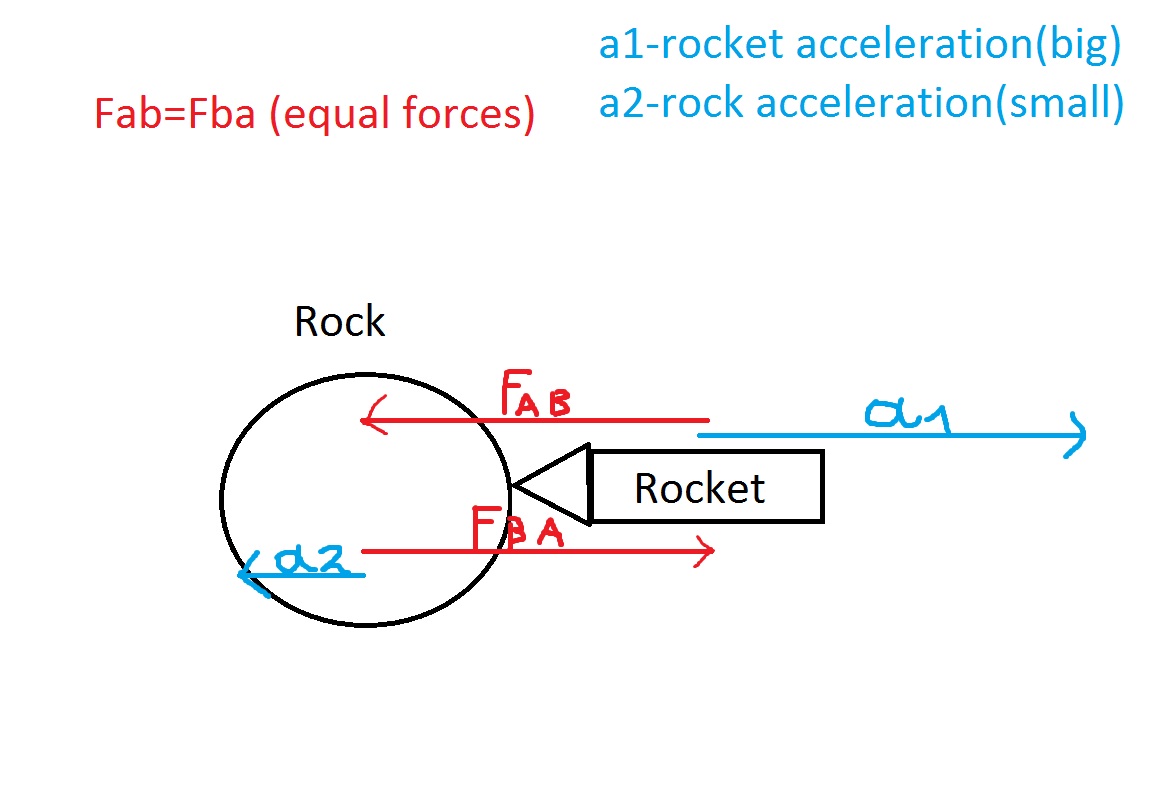 Not sure if it helps but added picture to second question

To the first question: Newton's third law states that every force has an equal and opposite force. Thus, the force that Earth exerts on you with gravity (a big mass causing a huge acceleration on a small mass) is countered exactly by the normal force of the ground (again, a big mass causeing a huge acceleration on a small mass, but this time in the opposite direction). You can see this when you jump, and the normal force is no longer applied to your body, you quickly fall to Earth. In a sense, the force the ground pushes back on you is really equal and opposite to the gravity of the Earth pulling on you.

I'm not sure I understand your second question. It doesn't really specific the situation well, and it's poorly worded; if you rephrase it I can hopefully give you answer.

Assume the rocket has enough fuel to power it for an extended period of time.

The rocket pushes against the rock with a force (as long as it has fuel).
Let's call it $F_{thrust}$ and it will have direction "forward".

The rock pushes back with equal force (Newton's 3rd Law). In the question you specify that the rocket has less mass than the rock, so $m_{rocket} < m_{rock}$. Both objects experience $F_{thrust}$, but the rock experiences it in the "forward" direction whereas the rocket experiences the force in the "backwards" direction.

In conclusion, it goes like this:
The rocket pushes against the rock. The rock pushes back but moves because the force of the rocket is (making an assumption here) greater than whatever is holding it still (e.g. friction, air resistance, etc). The rocket should move back because the rock applied a force on it, but it using fuel to generate thrust over an extended period of time. Therefore the force it received from the rock is cancelled out and the rocket moves forward again. The rock has moved so the rocket has space to move forwards. When the rocket and the rock meet again, this process repeats itself.

OP's first question has been answered by @jhobbie. Specifically, we sometimes do fly (jump)! This is when the normal force does exceed our weight - gravitational force of attraction towards Earth.

The force on rock is NOT always equal to $F_{Thrust}$. The diagram should look like this:

So, in OP's notation of acceleration (i'm keeping the direction as mentioned through arrows in original question diagram):

Going over the laws of total energy conservation (if collision is ellastic) and conservation of total momentum will easily show that everything is all right.

Here $N$ is the normal force of reaction between Rock and Rocket; OP's $F_{AB}=-F_{BA}$ is actually this normal force $N$. $F_{Thrust}$ is the force given by the exhaust gas on rocket. Newton's (3rd) law does not demand $F_{Thrust} = N$. One can always study various limits of the masses, like $M_{Rock} \rightarrow \infty$ corresponds to a wall. There $F_{Thrust} = N$, as the rocket will try to push the wall which however does not budge, and rocket will not move forward. Typically, for a ball, where there is no $F_{Thrust}$, the $N$ will result in the thrown ball bouncing back to one's hand, bouncing off the wall.

If small rocket(with small mass) pressure against bigger rock with greater mass the rocket should have greater acceleration towards direction opposite to its flying path so how the rocket can actually move the rock(towards left at picture where rock acceleration is small) and not the opposite(rocket acceleration at picture towards right is bigger)?

The confusion in the second depends on the first question and on your sketch,

your knickers are twisted! , if you wand to apply Newton's law the rocket must push the rocket with its jet:

and, since the mass of the Rock is bigger, its acceleration will be smaller