Phase and amplitude information of an image

One way to understand it is through the lens (pardon the pun) of Fourier optics.

We first consider light to be represented by a complex wave $\Psi(\mathbf{r}, t)$ It's most useful to refer to two properties - the modulus (amplitude), and the argument (the phase). With this representation, we can represent:

(From now on, I'll refer to the spatial component, $\psi(\mathbf{r})$ of these waves only, since the $e^{-i\omega t}$ does not contribute to the interference in any way)

Consider an image, illuminated by a uniform plane wave traveling in the Z direction and the diffracting light coming out of that image. If we represent the image by a transmission function $T(\mathbf{x}) : \mathbb{R}^2 \rightarrow [0,1]$, where 0 means 'opaque' and 1 means 'transparent', we can represent the light emerging from the image by $\psi_0(\mathbf{x}) = A_0T(\mathbf{x})$. Each point on the image acts like a spherical wave source, interfering constructively or destructively with every other spherical wave in the planes beyond the image. The phases change in any given plane, and are responsible for the propagation of light. (This is called the Huygens-Fresnel principle, and is the basis of Fourier optics).

To illustrate this, consider a very simple case, such as a 1D double slit. It's clear that the phase is what causes the physics to happen - at any point, the diffracted wave is given by the superposition of the spherical (in 2D, circular) waves emerging from the slits. 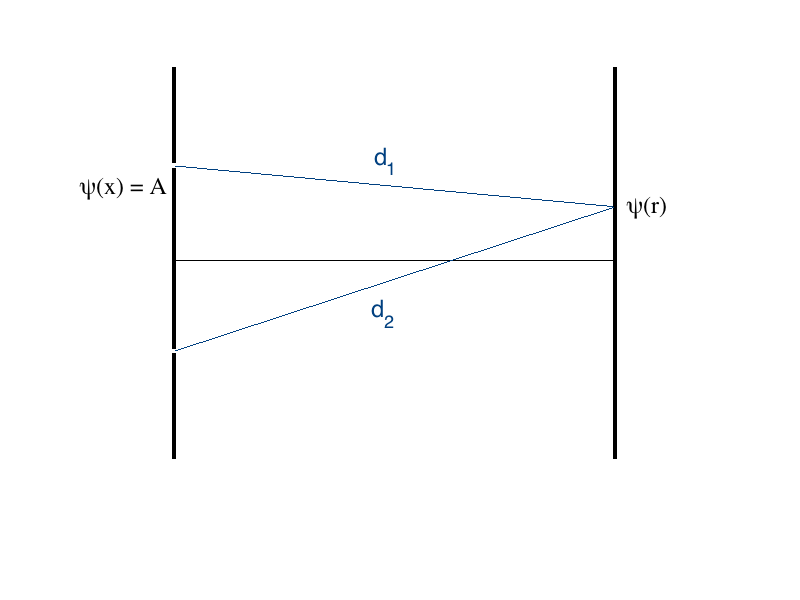 The point is that the interference pattern is produced by the summation of the phases, while the amplitudes are of minor importance in this example.

Going back to the general image, it can be shown that the interference pattern produced by light when it passes through a lens is a Fourier transform of the original image. However, when we actually take a photograph or observe an image, we are only able to measure the intensity of the light, which is proportional to the absolute square of the wavefunction - we are only able to measure the amplitude directly. However, it is the phase information that causes the interference in the first place.

It's impossible to invert the Fourier transform from the amplitude information alone - you need the phases to figure out how the propagating light interferes, which is the only way to recover the original image.

HyperPhysics have a much more detailed introduction to this field here.

Rather than post a bunch of images, I'm going to violate protocol and suggest a look at the ImageMagick_Fourier help page on fourier transforms of images. They've got a lot of very nice plots of the Magnitude and Phase results for 2D FFTs and reconstruction from same.

That should give you a pretty decent idea of what information each part of the FFT contains.

Here is an intuitive way of seeing what is going on:

When you Fourier-transform a real 2D image (in the mathematical sense of "real", i.e. non-complex values), you will end up with a magnitude and a phase distribution, that is correct.

As you already mentioned, the magnitude values tell you something about how much a certain spacial frequency contributes to the image.

The phase on the other hand is a bit more subtle to understand, but even more important than the magnitude: When you look at one k-space frequency only and transform it back to the image domain, then you see a periodic modulation in the real/imaginary part of your image, corresponding to the k-space frequency you chose. When you play around with the phase in k-space, you will see that it shifts the periodic pattern along in the image domain. Hence, the phase is relevant for how the periodic patterns of all wave functions add up.

Hence, the phase information carries the majority of the spatial information of your image.

Well, I don't think it makes sense to separate the amplitude and the phase information of a Fourier-tranform-component in this case. Both need to be correct for every single component (= spatial frequency) when you sum them up again (back-Fourier-transform) to get the real picture again. It turns out that the phase information is far more important but you still need the amplitudes to get the correct picture back.

Not the answer you're looking for? Browse other questions tagged optics fourier-transform geometric-optics image-processing or ask your own question.

3
Can I calculate the form of the aperture from the diffraction pattern?
1
Whether the job of Fourier Transform is just to convert signals from time domain to frequency domain only or more than it?
0
Which information do we get from the phase spectrum about the wave?
0
Phase Retrieval and Oversampling
4
Why EHT have to use Fourier transform to process the image?
0
Why is the image complex in magnetic resonance imaging? (and how does partial Fourier imaging work?)
0
Why is electric field Fourier transformed to produce image in radio astronomy?