Special relativity and imaginary coefficient of the time coordinate

I read somewhere that part of Minkowski's inspiration for his formulation of Minkowski space was Poincare's observation that time could be understood as a fourth spatial dimension with an imaginary coefficient.

Clearly, taking the Euclidean norm of the vector $$(i \Delta t, \Delta x, \Delta y, \Delta z)$$ gives the correct spacetime interval (assuming appropriate units), but I don't really know where it goes from there (possibly something to do with Moebius transforms?)

I think this is mentioned in Taylor and Wheeler's book, but I may have read it elsewhere. After the historical note, the author (whoever it was) said it was "preferable" to use Minkowski geometry straight off, rather than mucking about with time as an imaginary space coordinate.

Could anyone elaborate on Poincare's formulation? Why is Minkowski's methodology better?

but why isn't SR taught with an imaginary time coordinate as standard?

From "Gravitation", page 51, via Google books. 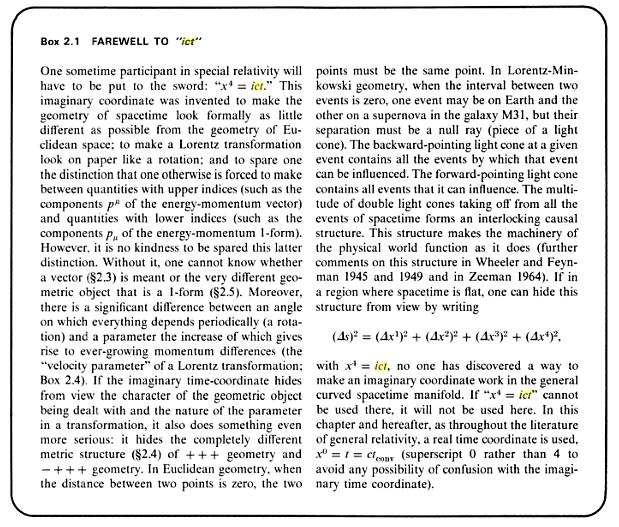 I'll type up a paraphrase later.

The reason comes down to having your system invariant under Lorentz transformations. With the imaginary time, such transformations are nothing more than rotations (of some sort).

Special Relativity, and a proper understanding of time, can be confusing if you just look at the effect rather than both the cause and the effect. In other words, to start with, you have an absolute foundation or cause, that due to its structure, produces a relativistic outcome.

But today's school system in general only teaches you of the relativistic outcome. This is shocking in a way since an event is constructed of both cause and effect. So why inform the students of only the effect?

If you Google, with quotes included, "KSP SPECIAL RELATIVITY - YouTube", you will find a video coverage of the analysis of motion that leads to a full understanding of Special Relativity and its equations. ( Some of the folk who watch the videos are mystified as to why Special Relativity is not taught in this simplistic way within schools. )

Not the answer you're looking for? Browse other questions tagged special-relativity history complex-numbers wick-rotation or ask your own question.

0
Why is it problematic to regard the Lorentz group as ${\rm SO}(4, \mathbb{C})$?
0
The imaginary time
14
Minkowski Metric Signature
25
Can quaternion math be used to model spacetime?
10
Minkowski spacetime: Is there a signature (+,+,+,+)?
15
Are basis vectors imaginary in special relativity?
7
How many seconds are a meter in the 4th dimension?
10
Does time dilation mean that faster than light travel is backwards time travel?
3
Why is imaginary time “outdated”?
0
Lorentz transformations: new actual notation for a $4$-vector
See more linked questions