How does stuff glow in the dark?

Many things have glow in the dark properties (glow sticks, paint, toys ..), and I am wondering what is the physics behind them. How do these materials store light energy and emit it later when dark?

What dictates the wavelength(s) of the glow? Is there a limit on how much energy can be stored and recovered in these materials? Do they give out heat as well as light?

When one excites fluorescence with light (e.g. blue light), the incoming photon pushes an electron into a higher state. Generally one always excites vibrational states (movement of the molecules' atoms) as well. Therefore the emitted photon has lower energy (e.g. green light). The lost energy (internal conversion) heats the solvent or lattice. The shift in frequency (from blue to green) is called Stokes shift.

People plot these energy levels in Jablonski diagrams. I stole this from http://biophys.med.unideb.hu/old/pharmacy/fluorescence_print.pdf 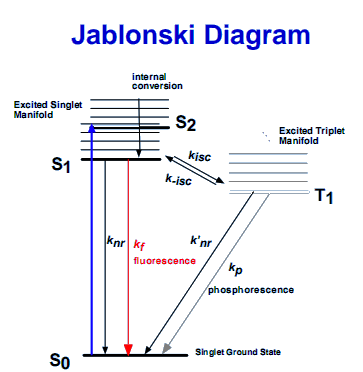 You can only excite as many electrons as there are in the material. This means that absorbing laser goggle are not safe for high power pulsed laser. The early photons of the pulse will saturate all the electrons in the goggles and the rest of the pulse can advance into the eyes and do damage.

In a glow stick the excitation is done by chemical energy. Hydrogen peroxide splits some organic molecule and one of the produced excited carbon dioxide molecules can transfer its energy to a fluorophore. I once saw an experiment where the chemicals from the glow stick were added to tea and the tea's chlorophyll started glowing in red.

The only reason I can think of right now, why anyone would want to store energy like this, is to be able to access it with the speed of light. In high power pulsed lasers special crystals are pumped into the higher state and the energy can suddenly be converted into photons. That way it is possible to create pulses with Petawatts of power.

This phenomenon is called phosphorescence. Electrons in the material are pushed into excited states by light, and then drop back down, emitting light with a characteristic frequency corresponding to the energy of the transition. It is analogous to fluorescence, however whereas fluorescence is a very rapid process, phosphorescence is delayed due to the electronic transition involved being 'forbidden' (in practice, this means low-probability at non-zero temperatures). As such, the process of all of the atoms or molecules in the material returning to their ground state is a drawn out over minutes or hours.

Note: Glow sticks are a different matter - they employ an organic fluorescent dye and an oxidising agent.

Wavelength: determined by the energy of the electronic transition.

Energy limit: You will eventually reach a point of saturation where the material is totally excited.

Not the answer you're looking for? Browse other questions tagged visible-light chemical-compounds or ask your own question.

2
Why don't electrons return to their ground state immediately after photoexcitation?

17
Why isn't light scattered through transparency?
1
Red light on blue object (for graphics software)
13
Seeing colors: photons vs waves
6
How can absorption spectra form if atoms can't remain in an excited state?
1
Can a beam of light be modulated close to it's frequency?
20
“Red Hot” Objects & the Ultraviolet Catastrophe
2
Revisiting the choice of tungsten in light bulbs
4
How much heat do colors absorb?