What's wrong with this experiment showing that either FTL communication is possible or complementarity doesn't hold?

The idea is simply to have Alice and Bob perform the Quantum Eraser Experiment (doesn't need to be the delayed choice).

Alice and Bob agree on a specific time when Bob's photon will be between the "path marker" (which is usually just after the slits) and the detector.

If Alice acts collpasing the wave-function on her photon, the interference pattern will disappear. If not it won't.

Alice and Bob can be spatially separated...

What am I misunderstanding?

The only meaningful difference from this spatially separated quantum eraser experiment to one done on tabletop is that you won't be able to use a coincidence detector, but that is not impeditive to identifying the interference pattern, just will make errors more probable. Which we should be able to deal with a appropriate protocol...

There is a experimental paper with a small amount of citations pointing out to the breaking of complementarity in a very similar setup: http://www.pnas.org/content/early/2012/05/23/1201271109

This page has a good simple summary of the experiment, they present the following simple schematic of a delayed choice quantum eraser (the same as Figure 1 in the original paper by Kim et al.): 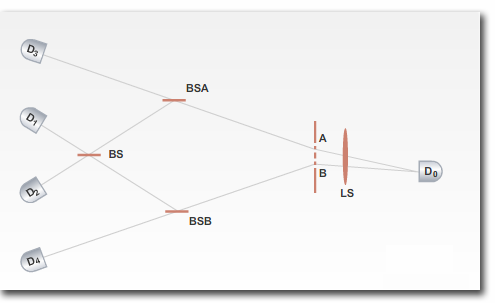 In this case, if the entangled "idler photon" is detected by Alice at D3 or D4 then she will know whether the "signal photon" went through slit A or slit B, but if the idler is detected at D1 or D2, then the which-path information for the signal photon is "erased". Alice would be free to replace the beam-splitters BSA and BSB with mirrors to make sure all the idler photons were directed at the middle beam splitter BS, ensuring they all ended up at D1 or D2 and had their which-path information erased. She would also be free to simply remove BSA and BSB so all the idlers would end up at D3 and D4, so none of them would have their which-path information erased. And for a large enough setup, she can in principle make either choice after Bob has already observed the pattern of the signal photons that have passed through the double slit and been detected at D0 (D0's position is supposed to be varied to see how many signal photons it detects at different positions, but feel free to replace D0 by the more traditional "screen" behind a double-slit if it makes things more clear, the point is that this is where you expect to see either an interference pattern or a non-interference pattern depending on whether you know which slit the signal photon went through).

You can also see it in the graph of the R01 and R02 interference patterns on the wikipedia page: 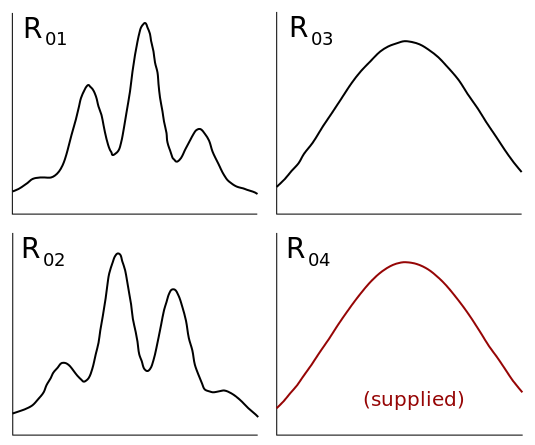 The original paper by Kim et al. notes this issue on p. 2, saying "It is clear we have observed the standard Young’s double-slit interference pattern. However, there is a $ \pi $ phase shift between the two interference fringes."

So, regardless of what Alice does, Bob never sees an interference pattern if he just looks at the total pattern of signal photons arriving at D0, only after he has communicated with Alice and learned which idlers went to which detectors can he look at particular subsets of signal photons whose idlers all went to a particular detector, and see an interference pattern if that detector is D1 or D2.

If I understand correctly, Alice and Bob generate an entangled pair of photons and each take one. Alice does something with hers (you specified a quantum eraser experiment at a particular time, but I won't make that assumption) while Bob does a standard double-slit experiment with his.

A minor point here is that with one photon you'll never get interference fringes, just a dot, but they can work around that by repeating the experiment many times, with Alice trying to send the same information each time, until a pattern has built up on Bob's screen.

The outcome of this experiment depends on whether any measurement of Alice's photon could reveal which slit Bob's photon went through. (A more precise description of the experimental setup would settle this question.) If it can, then Bob will not see an interference pattern no matter what Alice does. This is because for the interference pattern to disappear it's only necessary that which-path information be recorded somewhere and in principle accessible to measurement; it doesn't matter whether the measurement actually happens.

These two cases are actually two ends of a continuum; if measurements on Alice's photon can reveal partial information about the path, then Bob will see a pattern intermediate between the fully interfering and non-interfering patterns. But in no case does the pattern depend on what Alice actually does with her photon, only on what it could tell her in principle.

In the paper "Time-resolved double-slit experiment with entangled photons" (mentioned in your answer), although the text for Fig. 4 says "Interference pattern fringes move as the phase is changed remotely by the QWP", it appears that they are talking about fringes that only appear after postselecting with D1 or D2, as in the usual quantum-eraser setup. Note that the fringes in Fig. 4(B/D) are labeled "heralded by D1/D2", and Fig. 4(A) shows a total detection envelope with no fringes.

Not the answer you're looking for? Browse other questions tagged quantum-mechanics experimental-physics quantum-information quantum-interpretations double-slit-experiment or ask your own question.