Based on note, how fast is a stringed instrument's string oscillating?

to be quite honest, I have no idea where to start on this problem mathematically. However, it struck my curiosity and would love to know how it works on a mathematical level.

You have a guitar. All of the strings start at a resting position. When you play a string, it is now oscillating between two points (as far as I can tell). The speed at which it oscillates is correlating to the frequency, and the distance between the points is how hard the note was struck or the volume of the note.

All I really have so far is that E and B are a perfect fifth apart, making the ratio of their frequencies 3:2. If one were to play the 12th fret of the same string, that would be a 1:2 relationship. Therefore it follows that the speed they oscillate should follow the same proportions. I, however, am not sure how to get an initial distance.

Edit for some clarity; the application

to put this question in context, I am trying to programmatically work with a three-dimensional model of a guitar as it is played by a guitar player and make it visually convincing.

As such, when he plays an open string, it would move more slowly. If he put his finger on a fret on that string and played it, nothing from his finger to the nut would vibrate, but the rest would vibrate FASTER. I'm trying to discern a reasonable level of accuracy of this visual effect.

Update: I guess I misunderstood the question. What I answered was "how fast do points on two strings move in relation to each other".

In addition one can not talk just about a single frequency in the case of any musical instrument. There are always side bands. This is because off the material the strings are made of. The different frequency sound waves move with different speeds - this is called dispersion. Due to this you have more than one solution to the wave equation and it is said to have many modes exited. So not even a single string oscillates with a simple relation for the speed. This is also why different instruments have a different sound even when playing the same note. Maybe you have heard a frequency generator make pure tone and the lack of side tones is what makes it sound boring or even annoying.

To give you a feeling of what is going on here are few plots. First lets show two sine waves which have frequency ration of 2/3. I plot them with Mathematica. If you happen to have one you can copy the code and play with it. 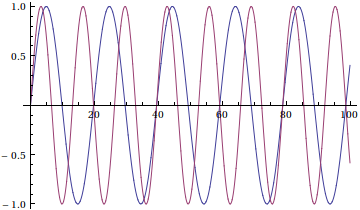 You can see, that the relation between changes in time. Now lets look a sine of which frequency is the difference and a difference the two sines on the previous plot. 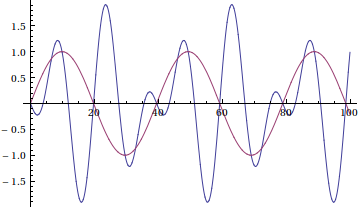 You can see, that the constructive interference or so called frequency beating happens with a frequency of the difference of the two of the initial sines. It is also called the frequency mixing. This is what makes some accords on some instruments sound really nice... the combination of frequency mixing, higher harmonics and side tones together make a complicated spectra of frequencies.

If you want to see the speeds instead of the positions over time, then you need to take a derivative by time. This gives you cosines and the things you get would have the same properties.

"How does one determine how quickly the string is oscillating between the two points in a unit of measurable distance?"

The measure of how quickly the string is oscillating is its frequency, stated in Hertz (cycles per second).

The frequency of played string is can be found by

G4 is a perfect fifth above C4 and is approximately the same number of hertz above C4 as C4 is above C3. 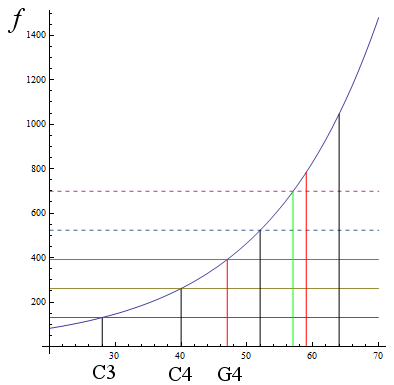 As I recall the discrepancies are due to the Pythagorean Comma.

how fast is a stringed instrument's string interpolating?

The other answers have related translation of a note into a frequency.

For a guitar, I think that you wish to know the position of each point in the string as a function of time.

Let the length of the string be L.

Defined the point at which is plucked P along the length, with amplitude A.

The initial position is a triangle (not necessarily isosceles)

This then needs decomposed into individual frequencies using Fourier decomposition. Each of these Fourier components then oscillates at a different frequency to obtain the full time dependent profile.

Well, I was about to elucidate all that, but stopped myself. See for example Power point from BYU Physics Dept., MathWorld

In the above, v is the speed of the wave, which in turn determines the frequency via the standard wave equation.

All this I recall from lectures years back. The more tricky bit is: how to the amplitudes decay? The following paper has some discussion on this:

Not the answer you're looking for? Browse other questions tagged calculus or ask your own question.

68
How to treat differentials and infinitesimals?
4
How is taking the average of an integral over an interval justified?
0
Differential derivation based upon time and space confusion
2
How to write this vector?
1
Why do we use a calculus based approach for calculating the work done when a charge moves a certain distance in a system of two charges?
1
Equation for stationary string