Is the edge of our Hubble Sphere within our Cosmic Event Horizon and why?

I was recently shown a pretty cool video about common cosmological misconceptions. It got me reviewing the different between event horizon (current distance within which we will see/interact), particle horizon (current distance within which we have seen/interacted, and the Hubble Sphere (distance at which things are currently receding at the speed of light). 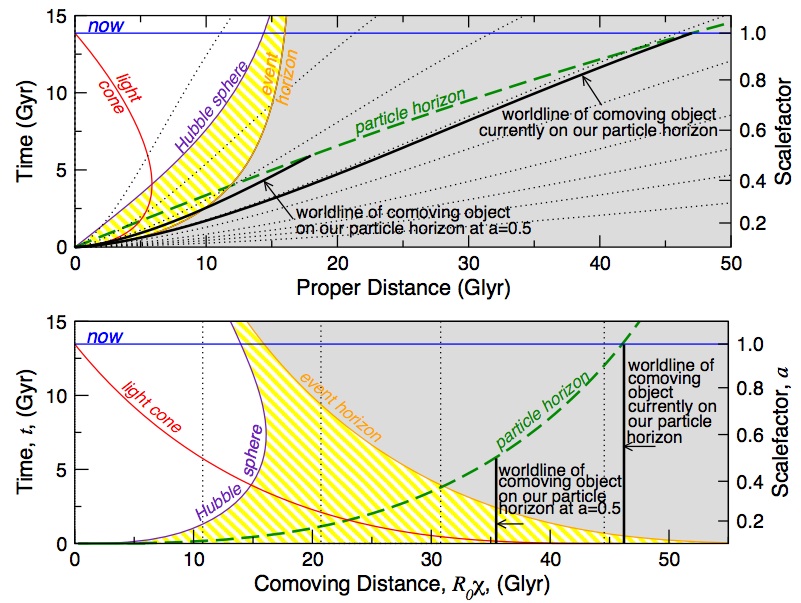 As Chris White points out, this is a subtle issue, so I'm eager to see some more answers - perhaps someone can some up with a good car analogy ;)

In the meantime, here's my best shot at an explanation:

First, accept that the existence of a preferred spatial slicing does not make FLRW spacetime into Minkowski spacetime: Proper distance at constant cosmological time is no substitute for special relativistic proper distance, and all caveats of general relativity still apply.

Now, consider comoving coordinates and pick any two points at rest as emitter and (eventual) absorber. No matter the initial proper distance or recession velocity, a photon will move steadily from emitter towards absorber, decreasing the comoving distance it still needs to travel. It will not stop or freeze at any particular distance, and this is even true for photons that get emitted from beyond the event horizon - they'll just take a longer-than-infinite amount of time to reach their destination...

The event horizon is basically the past light cone at $t=\infty$, made up from null geodesics and has physical significance. In contrast, the Hubble sphere is largely arbitrary: It's where a particular coordinate velocity - the recession velocity - reaches $c$. However, the speed of light only limits relative velocities, which need to be evaluated at the same event or via parallel transport. Going by Pulsar's figure, light that reaches us from the Hubble sphere right now has $1\lt z\lt3$, so as far as the photon is concerned, the relative velocity of emitter and absorber was about $(0.7\pm0.1)c$ - nothing to sneeze at, but near enough is not good enough.

The reference is Pulsar's answer, see detailed explanations and graphics.

@Christoph 's answer is correct, so it is just an other way to express the answer.

First, there is a notion of instantaneous proper distance (between us and some galaxy), where we may imagine that the expansion is stopped at time $t$, and that we measure the distance between us and the galaxy. This is a pseudo-distance, which is not really and practically measurable.

The Hubble distance is a proper distance corresponding to a recession velocity of $c$ at some time $t$. It depends only on characterics ($a(t)$, etc...) at the time $t$.

The difference between the cosmic event horizon proper distance (and also for the past light-cone proper distance) , compared to the Hubble distance (see in the reference the expressions of $D_\text{H}(t_{ob}),D_\text{lc}(t_\text{em},t_\text{ob}) ,D_\text{eh}(t_0$) for details), is that, for the cosmic event horizon proper distance and the past light cone distance, there is a physical signal (a photon). So there is an integration on different $a(t)$, this corresponds to the fact, that, while the photon itself has always a speed of $c$, in a local frame, the real distance between, for instance, $2$ intermediate galaxies on his travel, is increasing, due to the expansion of the universe. So we have to take in account all the values of $a(t)$ from the time where the photon is emitted until the time where the photon is observed.

The other fact is that it is exact that the Hubble distance lies completely inside the event horizon. The relation between the $2$ depends on the expression of the Hubble parameter $H(a(t))$, between $t$ and $+\infty$

Here's my attempt at answering the question (read: thinking out loud).

In the past the universe was decelerating in its expansion.
Because of that, the Hubble-Sphere was actually expanding; i.e. you have to look father and farther away to find an object receding at the speed of light. Thus, if an object just a little ways outside the Hubble-sphere emits a photon, if you wait a while it will be within our Hubble-sphere, and we will eventually receive the photon. No problem.
But in a way, the Hubble sphere and photon were actually working together. What I mean is, the photon is traveling towards us, and the Hubble sphere is moving away from us -- bringing that struggling photon within its grasp. 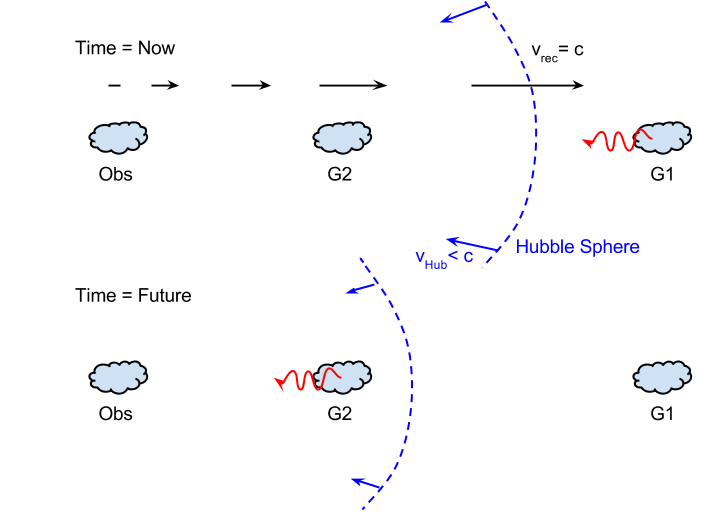 Not the answer you're looking for? Browse other questions tagged cosmology speed-of-light spacetime event-horizon or ask your own question.