I'm working on a project that involves a scale parachute. It is vital for the project to get a good measurement of the speed it has when it lands. We still haven't built the parachute, but we need a way to know the speed it has when it touches the ground. We have thought about using a cellphone as the body tied to the parachute and write an app that collects the accelerometer data, then use this data to calculate the velocity. Another option was to use two lasers very close to each other and photoresistors with arduino. Then, given that we know the distance between the lasers, the lasers would give us the time it takes the object to travel this (very small) distance and we would get an approximation of the speed at that moment. The problem here is that the parachute may move horizontally as well, and land at some point where our laser can't detect it.

We are not sure if these are good ideas or if there is any better approach. What do you suggest?

If the parachute is of a relatively well-known geometry, there exists a substantial repository of aerodynamic data available online which includes the drag coefficients of a wide array parachute designs ($C_d=1.3$ is probably a reasonable first guess). Determine the best drag coefficient that corresponds to your geometry, estimate the weight of your load, and then use these quantities to calculate the terminal velocity of the configuration. Based on a force equilibrium, the terminal velocity should be

assuming that you know the projected area of the parachute. If the fall is not large enough for the load to reach terminal velocity, then the equations of motion can be integrated numerically via MATLAB or an analogous computational package. If you take this route, the differential equation governing the motion of the object will be:

where $y=y(t)$ is the instantaneous vertical position (positive is down) and $g$ is the acceleration of gravity. As it turns out, NASA deals with this problem extensively when performing recovery calculations, and I have included a basic explanatory website below. Good luck!!!

If the drag force is being modelled as a linear function of velocity $(\vec{F}_D=-k\vec{v})$, then the problem is considerably less complicated and, in fact, has a closed form solution. The vertical force balance is now

which gives the following differential equation for the velocity:

If the initial velocity $v(0)=0$, then the solution to this ODE is known and is

By defining the characteristic time and terminal velocity as $\tau=\frac{m}{k}$ and $v_{max}=\frac{mg}{k}$ respectively, the velocity equation simplifies to

The position is found easily enough by performing another integration:

Assuming that the initial position $y(0)=0$ and simplifying, the solution for vertical position is then

So we now have analytical solutions for the acceleration, velocity, and position of the falling object as a function of time and the system parameters, all of which are known (except for $k$). Octave plots of these functions are included below for reference. 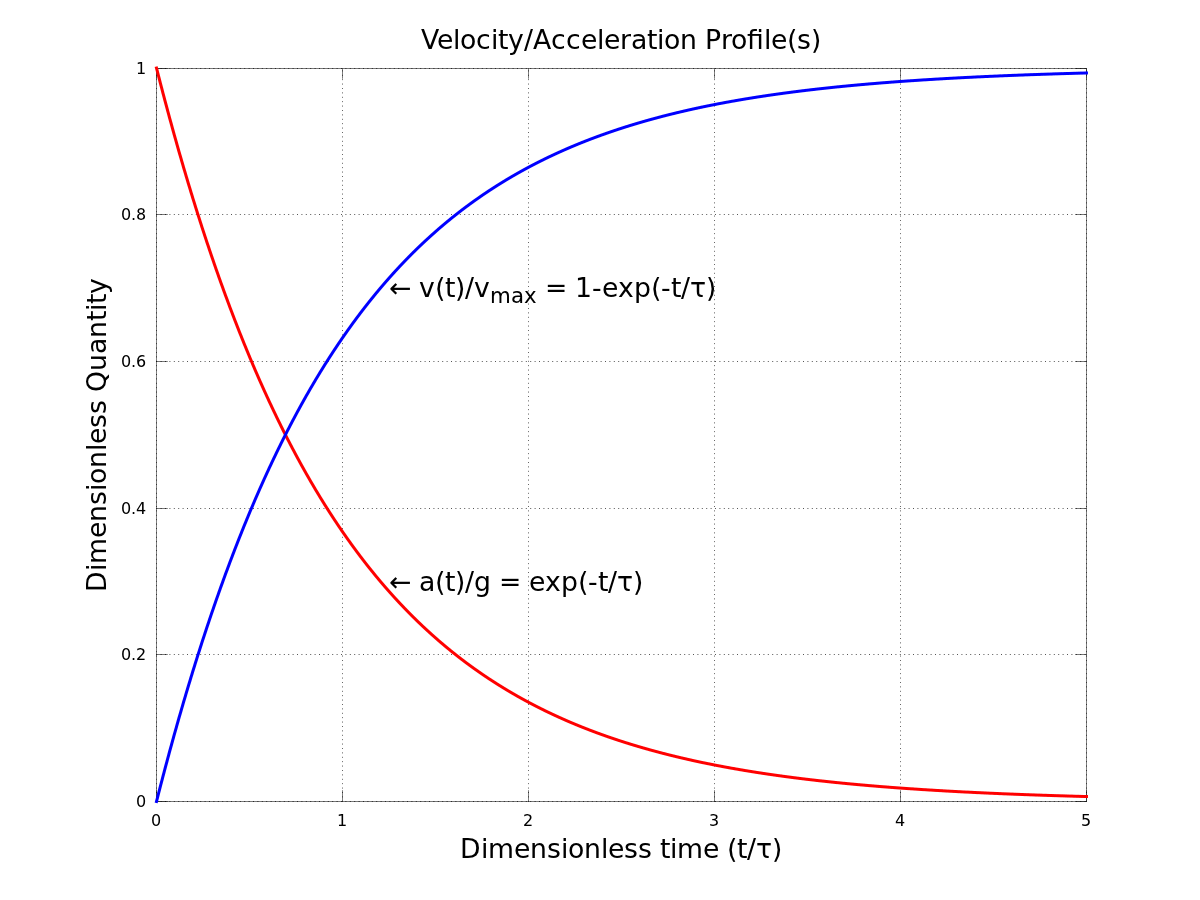 Now, your task is to find the linear drag term $k$ based on experimental data. Since we have an implicit relationship between elapsed time, position, and $k$ we can simply set $y(T)$ equal to the initial height $h_0$ to arrive at a relationship between the total fall time $T$ and the drag constant $k$. Writing all parameters explicitly, we have

Since $k$ and $T$ are implicitly related in a nonlinear way, we will be unable to solve the equation directly. Fixed-point Iteration is the simplest numerical method and should suffice for this example. Since the total elapsed fall time is assumed to be experimentally measured, we will arrange the equation to best solve for $k$. Rearranging the above equation and writing in recursive form, we have

Starting with a guess value for $k$ (say, 1.5) and iteratively plugging in the above equation should (eventually) converge on the value for $k$ that results in the measured elapsed fall time. If you are having trouble with convergence, try a different guess value or use another method (Newton's, False-Position, etc.). Alternatively, you could solve the problem graphically by plotting $y(t)$ versus elapsed time for various values of $k$, then visually identify which value of $k$ causes the object to fall through the initial height in the experimentally measured time.

Finally, if you are able to use video-capture, pressure transducer, or laser sensors to accurately measure the velocity just before impact, you can use the velocity equation to solve for $k$ instead of the position equation. In which case the recursive relation for $k$ will be the much simpler

This Hyperphysics webpage should also be a good reference for this type of problem.

If you know the dimensions of the object, use a laser and detector to measure the time it takes to fall through the beam path. Distance divided by time will give you the average velocity over the period, and if your detector is close to the ground, it will give you a good approximation. The best thing to do is to use a pressure sensor and back our the velocity from the impact, but the laser option is probably cheaper.

But I'd like to suggest that you simply video the event from two angles so that you can reconstruct the position in stereo and then just compute the velocity from the distance the package moves between the last two frames before impact.

You won't get high precision out of this method without high frame-rates, but you can get a basic answer very easily.

Hmmm ... it occurs to me that you can use the object itself as a scale and deduce the range from that with a single camera, but the stereo method may be more precise (and certainly offers a sanity check).

I would suggest creating a "scale" on the payload (bottom part) of the parachute. Depending on the size of the parachute, this might be a piece of graph paper wrapped around an empty toilet roll.

Now take multiple images in quick succession (with a camera that is fixed to a tripod - so it keeps pointing the same way). If you have a half decent DSLR it typically has a "burst mode" where it might take 10 high speed pictures per second, for example. You then put the pictures side by side and find the pixels corresponding to the same grid line on your reference. Because you can see how many pixels there are from one grid line to the next, you have a conversion from pixels to distance, and this is all the information you need for an accurate velocity determination.

The only other calibration you need is "frame rate of camera". For this I would recommend using a turntable (do you still have a nice vinyl record player - preferably one with the markings on the side that allowed you to adjust the speed based on a neon strobe that was running at mains frequency). Basically, if you could take a series of pictures (burst) of that turntable, you could compute the frame rate of the camera exactly.

Of course you could just use a run-of-the-mill video camera and assume that its frame rate is accurate (note - the NTSC frame rate of "30 fps" is actually 29.97 fps, but there are many different modes, so check your camera's specifications or measure it).

For even greater flexibility (and more effort in the analysis phase) you could use a hand held camera with the aperture set very small (so the depth of focus in increased). Please a checkerboard in the landing zone. Zoom in on the parachute as it drops, and keep it in focus. Now you will be able to take the images and register them based on the checker board - and once you have "artificially frozen" the motion of the camera you can once again measure the speed of the drop using the displacement of the reference relative to the pixels of the camera.

If you don't want to calibrate your camera, you could do the whole thing with a couple of bright LEDs - one red, one green. Create a timer with variable delay (preferably digitally set) and fire the two LEDs in turn (red light, pause, green light) in a very short burst. If your camera shutter is open, you will end up with two images on top of each other - and once again you can measure the displacement.

A variation on this last technique is something I actually used many years ago to measure the velocity distribution in a sandblaster - the correlation between red and green dots gave the displacements, and thus the velocities. Except I used actual flash guns with colored filters rather than LEDs to get sufficient light (in the days of film cameras...)

Not the answer you're looking for? Browse other questions tagged velocity home-experiment aerodynamics drag experimental-technique or ask your own question.

0
Why does a parachute decrease terminal velocity?
2
What would be an appropiate shape for a parachute?
0
Parachute jumping (high altitude)
0
Parachute in vacuum
5
Measuring air density - where is my huge error coming from?
1
Where do the units of velocity come from when calculating velocity in free fall under a parachute?
0
Calculate distance an accelerometer moved
0
Details about mechanics of directly-downwind-faster-than-wind vehicle