How can the Earth keep spinning with a liquid core?

In regards to the 'conservation of angular momentum' being the explanation of why celestial objects spin...

If you fill a ball or any other container with a liquid and try to spin it, you will not see any more than 5 or 6 revolutions because of the frictional losses of the liquid inside the container.

I first discovered this during lunch in grade school when I tried to spin my milk carton by throwing it up into the air while giving it a 'spin'. At best, I could get only 3 rotations out of it. This same principle can be seen when you spin a raw egg and a hard boiled egg on a table top. The cooked 'solid' egg will spin the raw one won't.

Because of my early experiences with milk cartons and eggs, somewhere in the intervening years I found it hard to believe some of the accepted 'facts' about our planet:

So here is my question: If the age of the earth 4.5 BILLION years, how can it be spinning freely in space with a liquid or semi liquid core for that length of time?

Combine the effects of the liquid core with the effects of liquid oceans and a gaseous atmosphere, all of which are creating resistance to rotation, these frictional losses would have stopped any rotation long ago.

If the earth had a solid core, I could understand it...

If the earth was less that 4.5 billion years old I might understand it...

But given the accepted age of 4.5 billion years with a liquid core and a fluid outer shell I say there is a fly in the ointment somewhere!

Your intuition about spinning fluids is wrong for a couple reasons.

The Exploratorium exhibit in San Francisco has a great demo of a fluid spinning in a spherical container called the Turbulent Orb: 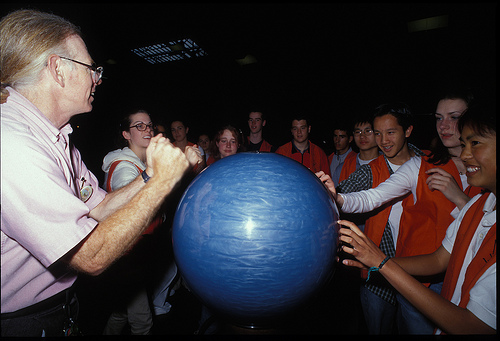 The Turbulent Orb is a large polycarbonate sphere full of special, colored, flow-visualization fluid. The sphere is mounted on top of a pedestal and can be spun in either direction and at different speeds. The fluid in the sphere shows swirls and waves of internal fluid motions produced by the actions of the visitors. The turbulence of the fluid in the sphere is reminiscent of the turbulent flows that occur in planetary atmospheres. This exhibit shows the complexities of fluid motion that can be produced by very simple circumstances.

My own experience playing with the exhibit is that you must spin the outer sphere around dozens of revolutions before all of the fluid in it is moving uniformly. Once you do that, the fluid inside of it continues to spin for quite some time. Because the fluid has a pearlescent additive you can even find evidence that the central portion of the fluid keeps spinning faster than the outer fluid (which slows faster due to friction with the stationary shell). If you first spin the orb in one direction and then let the outer fluid slow a bit, and then spin it in the opposite direction you'll see vortices form with axes tangential to the outer sphere. You do not get this effect if you start spinning it when the fluid is stationary.

In your comparison with raw eggs and milk cartons, the objects (and the liquid) inside are already at rest and you apply energy to rotate them. However, the entire earth is already rotating with comparably small external torques trying to slow it down. Back to your example, once you get the eggs spinning and try to stop them, they will continue to spin as the liquid inside is already spinning and you are trying to oppose its motion. Conservation of momentum applies to both stationary and rotating objects.(i.e. External torque is required to change their angular momentum.)

Actually, seismic evidence indicates that Earth's liquid core rotates a little faster than the crust does. This is probably because the rotation-slowing effects of tides with the moon act more strongly on the surface than on the core.

Jupiter, the other gas giant planets, and the Sun are all entirely fluid, are roughly the same age as Earth, and rotate. The gas giant planets actually all rotate more quickly than Earth does; for instance Jupiter's day is about ten hours. The Sun's rotation period is about a month, but the sun is enormous.

I'm afraid the intuition you developed by spinning non-spherical objects on non-spinning kitchen tables isn't appropriate for a uniformly spinning object in a vacuum. 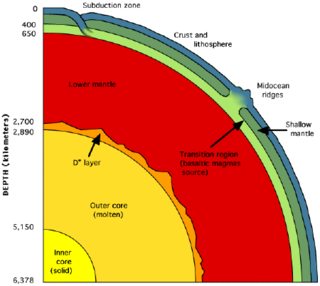 The crust is the thin, solid, outermost layer of the Earth. The crust is thinnest beneath the oceans, averaging only 5 kilometers thick, and thickest beneath large mountain ranges. Continental crust (the crust that makes up the continents, of course!) is much more variable in thickness but averages about 30-35 km. Beneath large mountain ranges, such as the Himalayas or the Sierra Nevada, the crust reaches a thickness of up to 100 km.

The layer below the crust is the mantle. The mantle has more iron and magnesium than the crust, making it more dense. The uppermost part of the mantle is solid and, along with the crust, forms the lithosphere. The rocky lithosphere is brittle and can fracture. This is the zone where earthquakes occur. It's the lithosphere that breaks into the thick, moving slabs of rock that geologist's call tectonic plates.

As we descend into the Earth temperature rises and we reach part of the mantle that is partially molten, the asthenosphere. As rock heats up, it becomes pliable or ‘plastic'. Rock here is hot enough to fold, stretch, compress, and flow very slowly without fracturing. Think about the behavior of Silly Putty® and you have the general idea. The plates, made up of the relatively light, rigid rock of the lithosphere actually ‘float' on the more dense, flowing asthenosphere!

So it is not a simple problem, except that assuming the earth could be seen as an isolated body the total angular momentum, liquids plus solids, should be conserved. If it is not it must be because of gravitational interactions with external bodies.

Your experiment with eggs does not accurately represent a planet with liquid core.

When you throw the egg up while giving it a spin, you are really giving a spin only to the shell. It will also drag along some fluid with it through friction, but not all of it and not at the same speed. So when you let go, the shell is spinning quickly, some of the fluid is spinning slowly, and some of it is not spinning at all. The parts that are not spinning slow down the parts that are spinning, and this is why it doesn't turn as fast.

By the way, eggs are not really free flowing fluid inside. The egg is fairly viscous, and moreover there are solid structures that fix the yolk in place: 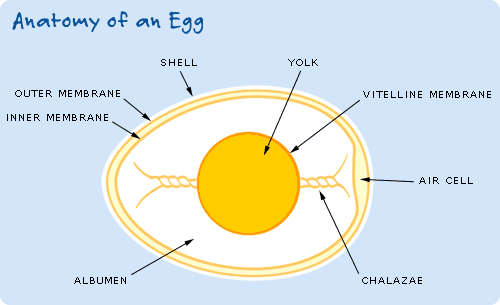 To do this experiment properly, you would first fill a bottle with water, then swirl the bottle in your hand to make the water form a vortex. Once it does, you immediately throw, while giving the bottle a spin of the same speed as the water.

An even simpler system would be a sphere, divided into two halves and connected by a freely spinning axle which has some friction. For instance, imagine the two halves are made of wood and the axle is metal. 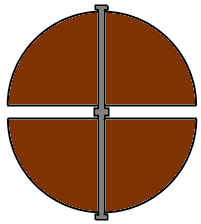 You would grip one of the halves, and try to throw it while giving it a spin. You will see that when it leaves your hands, the bottom begins to slow down as the top speeds up (depending on just how much friction there is in the axle).

In order to do the egg experiment correctly, you would have to place the egg into some device which can spin it for several minutes, long enough for the liquid inside to match the rotation of the shell. If you throw it then, you will see that the egg spins much better (and you can even feel the rotation of the fluid when you hold the egg).

As for the Earth, it keeps spinning despite having a molten core, because each molecule in the liquid has its own angular momentum around the center of mass, so none of them are pushing past each other. Well, some of them are, but on the whole, most of the molecules want to move at about roughly the same velocity around roughly the same family of orbits, as opposed to the surface wanting to move and the liquid molecules wanting to stay put.

The earth is actually slowing down, it was 22 hours long 370 million years ago. If you stay here long enough we will have 48 hour days. the end of the sun is only 5 billion years away. it will become a red dwarf and engulf the earth in a few billion years.

Why the earth is slowing down, is another question. Perhaps the moon dampens it's rotation. Some sources say that the earth speeds up and slows down intermittently in the short term, with a general slowing trend.

what about the liquidity? lava is viscous at surface pressure, and stickier than syrup. the centre is iron, perhaps gold and platinum, and iridium, but it's under pressure, there are studies of materials at those pressures. there is also active nuclear energy generation in the earth, but that is a force with a roughly axial /central symmetry.

if you put lava under many kilotons of pressure, its viscosity changes. whether it becomes more or less liquid, is another question too.

the length of Synodic (moon) months also changes from 29.53 days current average, they can see from fossils from millions of years ago, synodic month durations.

Not the answer you're looking for? Browse other questions tagged newtonian-mechanics angular-momentum rotational-dynamics friction earth or ask your own question.

1
What makes the Earth keep spinning?
0
If I start spinning a raw egg slowly why does its angular velocity increase spontaneously?