Deceleration rate of objects of different mass but the same otherwise

Using a tennis ball as an example object, if one ball weighs 1 ounce and the other is 2 ounces, and both are struck at 100 mph on the same trajectory, would there be any difference in the deceleration rate between the 2 different mass balls? (All other things about the two balls being equal). For instance, would the elapsed time for the ball to travel let's say 100 feet be different or the same?

FOLLOW UP QUESTION (based on answer #1): If it's true that the lighter ball would decelerate faster (and consequently take longer to travel a given distance), then what would be the difference in the initial velocity of the two balls (one 1 ounce, the other 2 ounces) if both are struck with the same implement with the same force (let's say a tennis racket travelling 100 mph).

If not too difficult, could you explain how this relationship (first the initial speed difference and then the total travel time difference for 100 feet) would be calculated?

They have the same drag force, the lighter one will decelerate faster

When an object (ball) of mass $m$ at rest is struck elastically by another object of mass $M$ traveling with initial velocity $v$, then the velocity after impact is given by

Two limiting cases: $m=M$, maximum transfer of energy (the racket stops and the ball travels with the velocity of the racket); when $m<<M$, the final velocity is twice the initial velocity (but the racket maintains most of its energy).

With the values given you are in an intermediate regime - the lighter ball will travel faster immediately after impact but it will slow down faster. The math for this is complicated in 2D - but we can make some progress in 1D.

Drag force on a sphere is given roughly by

The acceleration $a=F/m$ so as you can see the lighter ball will decelerate more quickly. The equations of motion become

The typical mass of a tennis ball is about 58 gram and typical velocity about 30 m/s. A racket has a weight around 250 - 300 gram, so the extra speed you get for the lighter ball is small - but the deceleration is real.

Putting in round numbers:

Plotting a graph of velocity and position as a function of time for a 1 oz and 2 oz (nominal) ball, I get for the position: 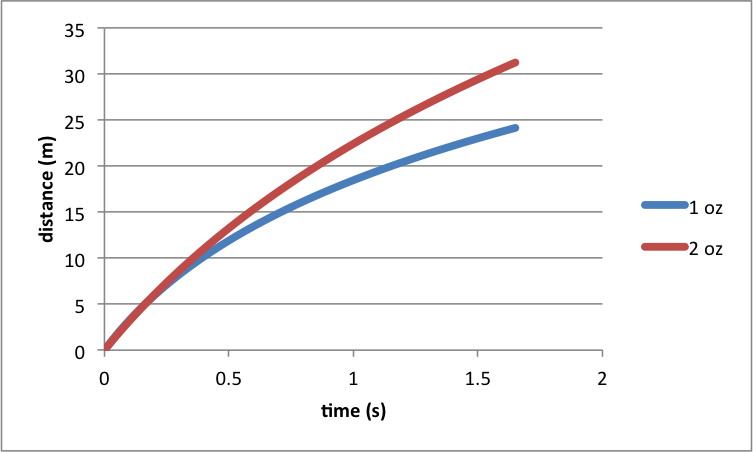 and for the ball speed: 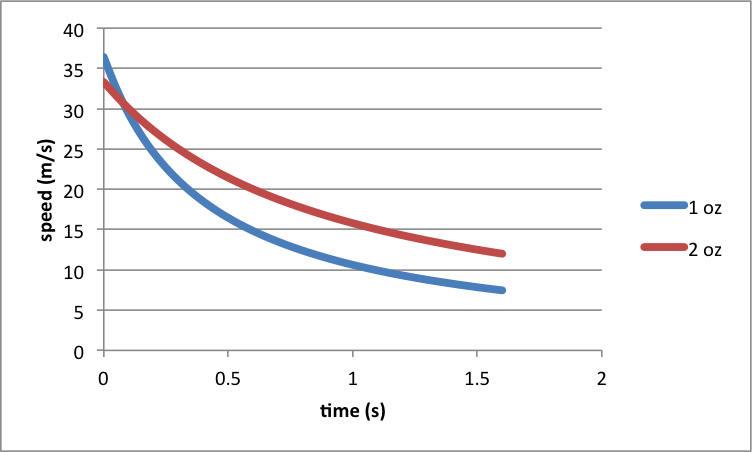 This confirms that the lighter ball will initially go a little bit faster - but that drag will quickly eliminate its advantage over any but the shortest distances. I will add graphs of the above function of x(t) when I get near a computer (hard to do on a phone...)

If the force applied to each ball is the same then it will provide the same impuls to both, then using J = M(v-u) it can be seen that the lighter ball will reach a higher maximum speed.

Either way using Newtons Second Law, F = MA we can determine the acceleration on each of the balls. From here it is a case of using calculus to determine the time taken to travel a specific distance. In this case integrating twice, from here it is simply a case of subbing in numbers. I hope that this helped.

Not the answer you're looking for? Browse other questions tagged newtonian-mechanics newtonian-gravity mass projectile drag or ask your own question.

40
Why do heavier objects fall faster in air?
1
Follow up question regarding: Deceleration rate of objects of different mass but the same otherwise

1
Follow up question regarding: Deceleration rate of objects of different mass but the same otherwise
3
Conservation of momentum in a baseball
0
2 airplanes same size and shap different mass
0
How is the work done in different types of collisions?
0
Will car burn same amount of fuel with equal acceleration $(ΔV)$ but at different speeds if resistance forces don't exist?
2
Inertial vs gravitational mass at different temperatures