Why does the atmosphere rotate along with the earth? 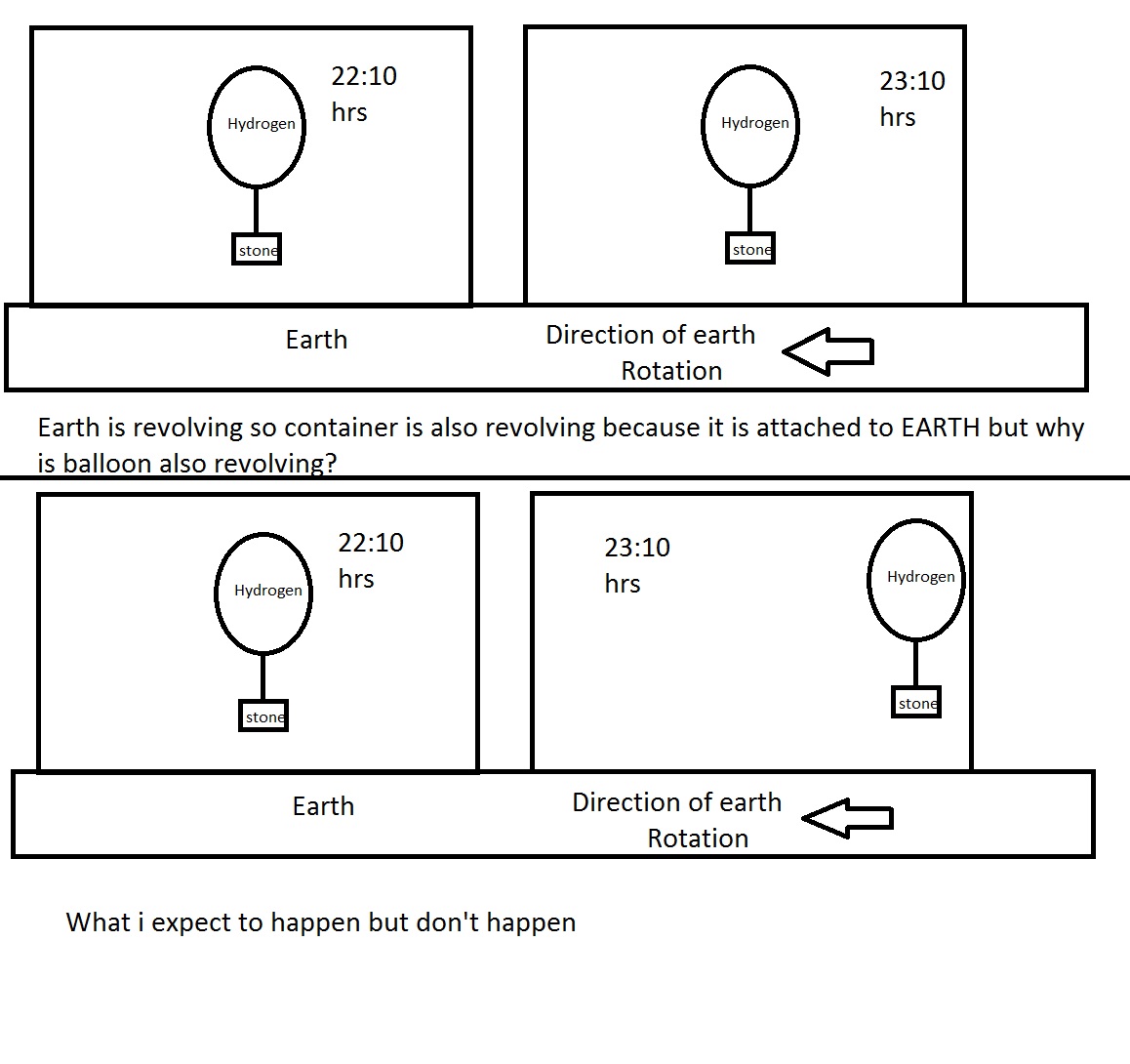 I was reading somewhere about a really cheap way of travelling: using balloons to get ourselves away from the surface of the earth. The idea held that because the earth rotates, we should be able to land in a different place after some time. As we all know, this doesn't happen.

Someone said that the reason why this doesn't happen is because the atmosphere (air, clouds etc.) also revolves around the earth (with the same angular velocity as the earth's rotation). Since we are also part of the atmosphere, our position doesn't change relatively.

The atmosphere rotates along with the Earth for the same reason you do.

Force isn't needed to make something go. That's a basic law of physics - that a thing that's moving will just keep moving if there's no force on it.

Force is needed either to make something change its speed, or to make its motion point in a new direction. A force can do both or just one of these. Most forces do both, but a force that pushes in the exactly the same direction you're already going only changes your speed, and does not change your direction. A force that pushes at a right angle to the direction you're already going only changes your direction, and does not add any speed. A force at "10 o'clock", for example, will change both your speed and your direction.

As you stand still on Earth, you continue going the same speed, but your direction changes; between day and night you move opposite directions. So the forces on you must be at a right angle to your direction of motion. Indeed, they are. Your motion is from west to east along the surface of the Earth, and the force of gravity pulls you down towards the center of the Earth - the force and your motion are at right angles. Similarly for the atmosphere. It is moving along with the Earth, and moving at a constant speed. It does not need anything to push it along with the Earth. Since only its direction of motion is changing, it only needs a force at a right angle to its motion, the same as you, and the force that does the job is again gravity.

That's not the whole picture, because the amount that your direction of motion changes depends on how strong the right-angle force is. It turns out gravity is much too strong for how much our direction of motion changes as the Earth spins. There must be some other force on us and on the atmosphere canceling out most of the gravity. There is. For me it's the force of the chair on my butt. For the atmosphere, it's the air pressure.

So gravity doesn't "make the air rotate". The air is already going, and gravity simply changes its direction to pull it in a circle.

You may be wondering why the air doesn't just sit there and have the Earth spin underneath it. One answer to that is that from our point of view that would mean incredibly strong wind all the time. That wind would run into stuff and eventually get slowed down to zero (that's from our point of view - the air would "speed up" to our speed of rotation from a point of view out in space watching everything happen). Even the air high up would eventually rotate with the Earth because although it can't slam into mountains or buildings and get stopped from blowing, it can essentially "slam into" the air beneath it due to friction in the air. (This is a little redundant with dmckee's answer; I was half way done when he beat me to the punch)

There are at least two reasons:

If the air were to stop suddenly it would result in ~1500 km/h wind speed. For comparison Hurricane Katrina's winds were ~100 km/h. It tells us that the air viscosity is sufficiently large that other effects (e.g., weather related) do not dominate its motion relative to the Earth surface.

You must have tried to stand in a strong wind or stuck you hand out the window of a traveling vehicle. From that you can feel the force that moving air exerts on objects in its way, and by Newton's law of reaction things in the way exert an equal force tending to move the air up to speed with the ground near it.

Even if the atmosphere started at rest, it would have long since been brought up to speed.

Because of friction. The friction between the earth's surface and the atmosphere.

All matter is attracted to the centre of the Earth due to the gravitational force.

Air is also matter, and it is pulled towards earth's centre, and due to this force it travels along with the Earth when it (Earth) rotates. The balloon, even when it is lifted up above the surface of the Earth, is still attracted towards the centre of Earth and moves with the Earth, subject to other forces applied on it like friction, etc.

The atmosphere rotates along with the Earth due to the friction. Friction makes molecules that are in contact with the ground to move. The friction between the air molecules (air viscosity) causes the upper molecules to move.

5
Can a hovering helicopter travel half the globe in 12 hours?
2
How come the atmosphere moves with Earth?
3
Why don't hovercrafts move West relative to the Earth
1
If I jump will I land in the same spot?
2
Sideways motion between a vertical launch from a planet and landing
2
Inertia over an airplane
-1
Does a helicopter that simply hovers remain in the same spot on earth?
-1
What will happen if a helicopter flew still?
1
Earth is rotating
0
Earth's rotation and a helicopter
See more linked questions

4
The Earth is spinning, so why don't we jump and land on a different location?
28
Why doesn't Earth's atmosphere form bands due to different rotational speeds?
0
Explain the relative motion between two particles of a rotating rigid body
0
Does the atmosphere rotate slightly slower than the earth surface?
3
Angular momentum of rotating and revolving body (earth)
13
Planetary atmosphere interfacing with near vacuum - now put it in a jar