Relationship of the abundance of an isotope and the vapor pressure

I guess this is coming from this perspective - the linear absorption spectrum for a sample of natural rubidium at a specific fine transition (D2 line - 5S1/2 ->5P3/2 if you are interested) looks like image below, the $^{87}$Rb peaks (outer) are clearly smaller than the $^{85}$Rb peaks (inner), and this amplitude ratio is directly related to their natural abundances. If the atoms are in a gas, what forces their vapor pressure to have the same ratio as their relative abundance? 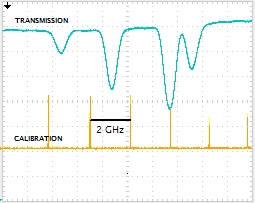 Along a similar line of questioning. A sample of Rb will naturally have some trace amount of Cs in it. The saturated number density of Cs at room temperature is ~$10^9$ atoms per cm$^3$, and I'm looking at a volume of say 1cm$^3$. If I have a droplet of 1 gram of Rb in the volume, which is .001 moles, even at .001% impurity I have $>10^{17}$ atoms of cesium in the sample, clearly enough to reach saturated density. -Does this imply that you can do spectroscopy on a volume with Rb and obtain the same spectrum as a volume with a droplet of Cs in it? If not, what prevents the Cs impurity in Rb to reach full saturation.

From the logic side - if there were much difference in wapor pressure between isotopes, isotope separation would be much easier process than we see now. Surely there is a difference, but not something you can see on spectrum.

I posed this question to some coworkers outside of physics.se here is the first order answer that satisfied me.

Evaporation is effectively a statistical process that is determined by the probability of a certain atom from escaping its liquid bonds and becoming free. The process does not care about what atom evaporates (in the approximation that the two isotopes have the same mass and binding energy - which is reasonable), it effectively becomes a probability problem. You have a bag of atoms, some colored blue and some colored red. The probability of picking a red atom out of the bag (having 85Rb escape the liquid and go free) is given by its relative abundance to blue atoms, assuming that there are enough atoms around that the atoms lost to the vapor do not significantly affect the ratio of isotopes in the the liquid, we would expect, statistically, the abundance of isotopes in the vapor would match that of the liquid.

For Cs impurities, the same logic applies, although you have to modify a little bit due to the heavier weight of the Cs atom and potentially a difference in enthalpy of vaporization.

Not the answer you're looking for? Browse other questions tagged thermodynamics spectroscopy or ask your own question.

3
The thermodynamics of heating water in a rigid container
1
Why do High Pressure Gases produce a Continuous Spectrum?
0
Is there a melting analogy for evaporative cooling
1
How do scientists measure vapor pressure?
2
What exactly is the driving force of a vapor turning into a liquid once it tips just above the saturated state?
5
Is there a difference in the infrared absorption spectrum of a greenhouse gas when pure and when mixed with non-greenhouse gases?
0
What is the volume of liquid propane consumed when measuring gas flow at a given pressure?
1
Why do we only see transitions corresponding to circularly polarized light in dichroic spectroscopy?