Is the graviton hypothetical?

Gravitons are hypothetical, but they're far less hypothetical than most of the other particles which theorists speculate about (such as axions, magnetic monopoles, strings, sterile neutrinos, and the like).

That probably sounds a little strange. Let me explain.

We don't have a complete theory of quantum gravity. But we do actually have an extremely good incomplete theory of quantum gravity. This theory is an "effective quantum field theory". It doesn't work for physics at distances smaller than the Planck scale, but it works just fine above that scale. In other words, it's good enough for all practical purposes. You get this theory -- maybe we should call it 'effective quantum general relativity' to distinguish it from classical GR -- by introducing a Planck scale cutoff into general relativity and then doing the path integral or canonical quantization or whatever your favorite procedure is.

Such effective theories are widely used in physics. One of the more famous ones was Fermi's theory of the weak interaction. It was broken in ways that drive theorists crazy -- non-renormalizable and non-unitary -- and it eventually had to be replaced with the Glashow-Weinberg-Salam theory. But it worked great. You can do essentially all of nuclear physics with just Fermi's theory. Hans Bethe even used it to explain how the sun produces energy.

So we have this theory, and it's ugly, but it works just fine at energies below the Planck scale. It gives correct answers; for example, it predicts that quantum gravity phenomena are practically impossible to detect in normal terrestrial physics. Moreover, this theory is mathematically pretty much unique: any theory of quantum gravity which reduces to classical general relativity at low energies must reduce to this effective QFT along the way. You really can't avoid it.

So we should take this theory pretty seriously, since it works well and doesn't require a lot of extra assumptions. And since this theory describes all gravitational phenomena we know about in terms of gravitons, it's probably fair to say that the existence of gravitons is a fairly good bet. (You might have to wait a long time to collect on that bet though.)

Gravitons are the particles you get from quantizing General Relativity. Since we don't know yet how to correctly quantize GR (or whether trying to quantize it is actually the right way to go forward; for all we know it might just be an effective theory where the more fundamental theory has to be quantized instead), we cannot know for sure whether the ultimately successful theory of quantum gravity will indeed contain gravitons. Thus it is still hypothetical. When we have an established theory of quantum gravitation, and that theory indeed includes/predicts a graviton, then its status will be elevated to "predicted".

I wonder whether graviton is indeed hypothetical or does its existence directly follow from modern physics?

At the moment we believe that at the micro level the underlying framework of nature is quantum mechanical and from that level the classical mechanics, thermodynamics and electromagnetism emerge.

"Believe" means physicists have gathered an enormous number of data which have been fitted beautifully with a quantum mechanical theoretical model, and the theory predicts behaviors successfully. All this is encapsulated in the standard model of physics, which includes three forces, the strong the weak and the electromagnetic in a mathematically similar manner, meaning that interactions happen with the exchange of the gauge bosons of each theory, gluons, photons, weak bosons, the red column of the table in the link.

Further, the theoretical model constructed to describe the data for particle physics, also predicts that at very high energies these three forces are unified having one exchange particle and the fact that we see three separate forces now is because of symmetry breaking as the interaction energy falls.

Now the big laboratory in the sky studied by astrophysicists has managed to construct a mathematical model, called the Big Bang model of the universe, where way back in time the energies available for the matter in the cosmos was of the order of magnitude where there was unification of the three forces, and this model agrees with all observational data to date. So there is a validation of the unification phenomenon by the good agreement of the BB model with data.

The holy grail of theoretical physics now is to get a theory with quantized gravity that can include the standard model of particle physics and for very high energies of interaction will unify gravity with the other three forces at the quantum mechanical level.

If this is true, then the graviton will be the first to differentiate itself from the unified forces , as its coupling constant is very weak and needs very high energies for its unification.

There does not exist such a comprehensive theory of everything at the moment. String theories do have quantization of gravity, hence gravitons, and can accommodate the standard model of particle physics but have other difficulties that have to be overcome before a theory of everything worthy of the name comes out.

But, physicists are good at effective theories, and an effective theory where gravity is treated as quantized and has the graviton as the exchange particle of gravitational interaction, exists and has been used in the Big Bang model

For a unified theory at the core of the theory of everything, a gravitational wave is composed/emerges from gravitons by construction as electromagnetic waves emerge from photons.

Here is a graphic of the big bang history of the universe:

In order for astrophysicists to explain the observation from the CMB ( cosmic microwave background) that the universe at the time the photons of the CMB decoupled was unexpectedly very uniform, they posited the inflationary period where the system is quantum mechanical and the uniformity observed in the decoupling epoch is the result of the mixer that the inflaton field is.

According to inflation theory, the inflaton is a scalar field1 that is responsible for cosmic inflation in the very early universe. A quantized particle for this field is expected, similar to other quantum fields, called an inflaton. The field provides a mechanism by which a period of rapid expansion from $10^{−35}$ to $10^{−34}$ seconds after the initial expansion can be generated, forming the universe.

A prediction of this model is that at about $10^{-32}$ seconds the gravitational field decouples from the soup ( similar to the photons decoupling at about $10^{10}$ seconds and giving the snapshot of the CMB), and spreads onward as gravitational waves which waves are composed out of gravitons, the way electromagnetic waves are composed out of photons.

Here is another image of the Big Bang theory showing the expansion of the gravitational waves. 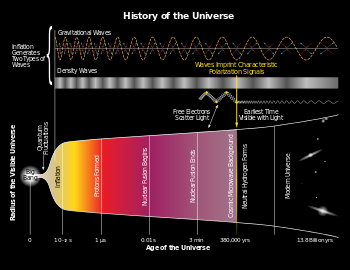 A prediction of the theory is that the polarization of photons/electromagnetic waves induced in the deformations of space as the gravity waves pass, will be imprinted in the CMB photon polarization as the light from $10^{10}$ seconds decoupled and arrived at our times mostly without interactions ( that is what decoupling means).

On March 18 a very important announcement was made by the BICEP2 collaboration , that this polarization was measured in the CMB and confirmed with good statistical accuracy the existence of gravitational waves hence, for the model to hang together, gravitons.

The physics community is waiting for confirmation, one experiment is never enough, (that is why the LHC has two large similar objective experiments) but if the result holds up we are living in very exciting times for physics. Here is one of the many discussions on the subject found in the blogosphere.

In conclusion, if the BICEP2 results are confirmed the graviton on the hypothetical scale will be as hypothetical as the quarks and gluons : dependent on the theoretical physics models, which at the moment have not been falsified.

Gravitons are hypothesised to be the mediating particle for the gravitational force. Even if Gravity appears to be the curvature of spacetime rather than an actual force, a "graviton" is still needed as means of communication of matter/energy to "tell" spacetime to curve. Gravitons afaik are hypothesised rather than predicted (might be wrong here) due to some of its properties (e.g a massless spin-2 particle gives rise to a force that looks like gravity).

The wikipedia page has a nice summary of the graviton.

Gravitons are hypothetical in the sense that we don't have a theory of quantum gravity. Furthermore, there are strong reasons to believe that individual gravitons can never be detected with any remotely realistic technology.[Rothman 2006]

Not the answer you're looking for? Browse other questions tagged gravity particle-physics quantum-gravity gravitational-waves elementary-particles or ask your own question.

-4
Are gravitons real?
1
If gravity arises from the curvature of spacetime, why is there a need for gravitons?
0
Existence of the Graviton
0
Are Gravitrons still hypothetical?
60
What are the reasons to expect that gravity should be quantized?
27
Is the quantization of gravity necessary for a quantum theory of gravity?
14
Why does gravity need to be quantised?
3
Do gravitational waves exist at the quantum level?
2
Is it possible to distinguish the intensity and the frequency of the graviton?
1
Gravity and graviton
See more linked questions

13
Prospects for detection of gravitons?
3
what's the connection, if any, between the graviton and the newly detected gravitational waves?
7
Can LIGO be explained in terms of gravitons?
0
Are GWs made of gravitons (are gravitons the quanta of GWs) or not?
0
Gravitons (real) passing through a black hole
2
What really is GW quanta?
1
Gravity: Wave/Particle Duality of the Graviton