How to identify whether the friction is kinetic or static?

The body 'A' is moving forward with certain acceleration over the ground. The ground applies a kinetic friction force on 'A' in backward direction to oppose the relative motion. The block 'A' also applies an equal and opposite force of friction on the ground, would that force of friction be kinetic or the static?

Intuitively, there is a relative motion of ground with respect to block, so, there must be kinetic friction. But since ground is a part of earth, an inertial frame in this case, why can't we term it as static friction? 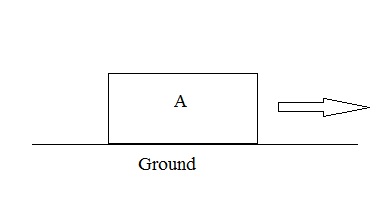