If the double decay $\beta\beta$ will be detected this means the neutrino is a Majorana particle coincident with its antiparticle. At the moment the half life of this decay is put to $\tau\ge10^{25}$years. The limit of the Majorana neutrino mass is about 0.2–0.4 eV. What is the relation between the probability of $\beta\beta$ decay and the neutrino mass? Thanks.

Your statement is wrong in one point:

Regular $\beta\beta$ decay happens in nature, even with dirac neutrinos. However, this shows the continuous electron (or positron) energy distribution one expects from just two (largely independent) $\beta$ decays (see image below).

What's interesting is that, if neturinos are marjorana particles indeed, a different decay channel opens up: neutrinoless double beta decay, also denoted $\beta\beta 0\nu$. This would in theory lead to a spike at the upper end of the combined electron energy spectrum, since no unobservable particles carry away part of the decay energy. The Feynman diagram looks like this 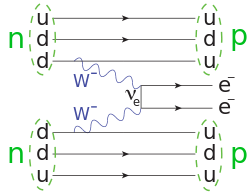 The internal fermion line (the one with $\nu_e$ on it) is only allowed for majorana particles, since they do not carry a well-defined fermion number and thus have no arrows.

Note that the image of the spectrum above laaaaargly exaggerates the expected spike. Double beta decay is rare as it is and the neutrinoless version is supressed w.r.t. the $2\nu$ version. What the experiments looking for $\beta\beta 0\nu$ expect, are single digit event numbers after years of observation.

Now, to your actual question: The smaller the neutrino majorana mass, the less likely neutrinoless double beta decay is. Therefore, in the limit of zero majorana mass (thus only dirac mass), we have no $\beta\beta 0\nu$. Note that this is for left-handed neutrinos, i.e. the neutrinos that are part of the $SU(2)_L$ doublet only. Right-handed majorana masses may be arbitrarily large without influencing the $\beta \beta 0 \nu$.

Still, if the small neutrino masses originate from a seesaw mechanism, the induced majorana mass qualifies for $\beta \beta 0 \nu$.

You can compare neutrinoless double-beta decay to the problem of \begin{align} \pi^+ &\to e^+ + \nu_e, & \text{with branching ratio} &\sim 10^{-4} \\ \pi^+ &\to \mu^+ + \nu_\mu, & \text{ branching ratio} &\sim 1 \end{align} Here the pion has spin zero and is at rest in some reference frame; in that reference frame the neutrino and the charged lepton must have equal and opposite momentum and have opposite spins, which works out to having the same helicity. But the weak charged current $W^+$ couples to left-handed particles and right-handed antiparticles. A relativistic, polarized lepton can only couple to the $W$ if its spin goes the right way. The neutrinos are hyper-relativistic and come out entirely left-handed. The $\mu$ has pretty low energy, and so its handedness is not very strong. But the positron is also strongly relativistic, with $\gamma \approx 100$, and has to come out spinning the "wrong" way due to the spins of the neutrino and the pion.

You have the same sort of thing happening in neutrinoless $\beta\beta$ decay: one of the neutrinos has to have the "wrong" spin, and the probability goes roughly like $\gamma^2$.

Not the answer you're looking for? Browse other questions tagged particle-physics neutrinos majorana-fermions or ask your own question.

2
Why a neutrinoless double beta decay implies a massive neutrino?