Peaks in binding energy per nucleon

Looking at the the binding energy per nucleon chart: 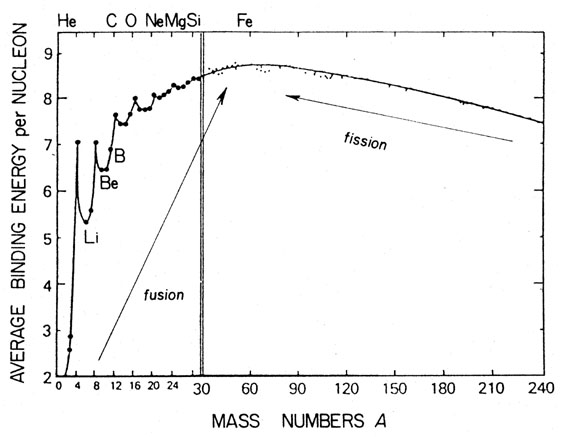 Inside of a nucleus you have separate orbitals for neutrons and protons. The magic numbers you're thinking of, where a nucleon orbital closes, do correspond to especially tightly bound nuclei, but to see it you need to look at a full table of isotopes. For instance, tin (with $Z=50$) has ten or eleven stable isotopes, while indium and antimony ($Z=49,51$) have only two stable isotopes each. There are also six different elements with stable isotopes having $N=50$, which kind of stands out on the chart. There are some "doubly-magic" nuclei with closed shells in both $N$ and $Z$, such as calcium-40, calcium-48, which are both stable, and tin-100, tin-132, both near the drip lines.

Not the answer you're looking for? Browse other questions tagged binding-energy nuclear-physics or ask your own question.