Why does a ball bounce lower?

Assuming for a moment an infinitely hard and smooth surface, let's look at the energy of the ball.

When the ball is dropped from a height $h$, initial potential energy is $mgh$. You would expect it to accelerate to a velocity $v=\sqrt{2gh}$. However, during the fall, it will experience drag from the air. This will cause the dissipation of some of the energy of the ball into energy of the air (turbulence, heating, flow). How large this effect is will depend on the ball, the height, ... For example a ping pong ball (light for its size) will experience a much greater effect than a golf ball (same size, but heavier).

Then we get to the impact. The ball will deform during the impact - the center of mass tries to keep going, but the surface it hits try to stop it. This leads to elastic deformation like this:

The potential energy of the ball was converted to elastic energy. You can think of it as the mass of the ball being mounted to a spring that compresses when you hit the floor - but there will be some friction (both inside the ball, and particularly between the ball and the floor) which will dissipate energy:

The picture on the left is the "in flight" state - the spring is uncoiled. The picture in the middle is the "fully compressed" state in which all energy of motion would have been converted to elastic energy. The picture on the right is the "actual" state: the spring did not compress all the way down because energy was lost due to friction (and thus was not available for compressing the spring).

Why do I say that friction between ball and floor is important for vertical impact? Look at this picture: 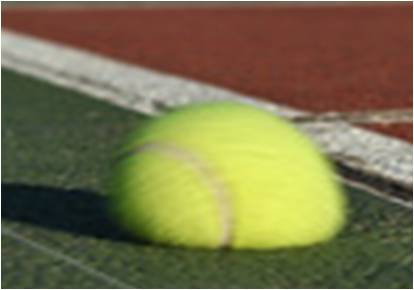 This is a tennis ball bouncing on the ground. See how distorted it is? Imagine taking that spherical surface, and pushing it into this new shape. The distortion requires you to change the contact area. As you do so, ball rubs against floor. The lateral force that this generates dissipates heat - so energy is lost instead of being stored in the elasticity of the ball.

Of course for an air filled ball, there are losses associated with the compression of the air: while the air is (adiabatically) compressed, it heats up; while it is hot, it dissipates heat to the environment; and when it expands, it cools down again. This ought to mean that when you hit a ball it gets cold: but we know that a squash ball, for example, gets HOT, not cold, when you hit it (this is why squash players "warm the ball up" before playing: as it becomes hotter, the pressure in the ball rises and it becomes bouncier). This heating is due to the extreme distortion (and thus again friction) of the ball during impact: 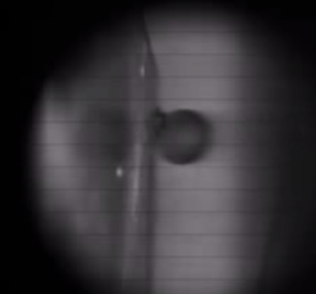 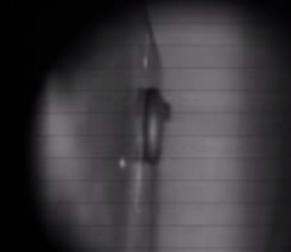 All this combines to give a particular ball and surface combination something called the coefficient of restitution - a number that expresses how much of the energy of the ball before the impact is "given back" (restitution (noun): the restoration of something lost or stolen to its proper owner.) after the impact. This coefficient is always less than 1 (unless you have flubber). Since the height to which the ball will bounce is directly proportional to its energy (barring effects of air friction), with a coefficient of restitution of less than one the ball will bounce less and less high.

When the ball hits the floor, its center of mass needs to be decelerated. It is done by deforming the ball (and possibly the floor if it is soft enough compared to the ball). In vacuum, if the ball and floor were perfectly elastic, they would then recover their previous shape following exactly the reverse dynamics as the deformation ones: in doing so, the center of mass of the ball would be accelerated of the exact same amount it has been decelerated, thus it would bounce back to the same height.

However, nothing is perfectly elastic: there is some friction during deformation (solids are somewhat viscoelastic), dissipated as heat, and there's also damage (plastic deformations: if the ball is hard, it will notch or chip bits off the floor e.g.) This energy is not recovered when the ball takes back its original shape.

As Jim notes, another loss is due to friction with air: although this is generally small for a ball heavy enough, this would still prevent bouncing back to the same height. It occurs both during fall and rise, and when hitting the ground: that's when the sound of the ball hitting is produced.

Right off the bat, as the ball falls, there is air resistance that slows it. This means the downwards acceleration it experiences as it falls is less than g. It also means that on the bounce back up, drag will be working with gravity so that the net acceleration is greater than g. So even in the case of purely elastic collision, the ball cannot reach the same height because of drag.

When it hits the ground, energy is not transferred perfectly. If you hear the bounce, that's some energy lost as sound. When it hits the ground, the act of deforming the surfaces along with frictions and compressing air all contribute to creating heat. That means some more energy is lost to heat. Then there is also the cases of inelastic collisions. If the collision is highly inelastic, the ball simply deforms like dough on a pizza tosser's head. This means that there is no return of energy as the ball resumes its original shape and thus no upward acceleration.

In a vacuum, with perfectly elastic collision, the ball will return to the same height (barring the effects of general relativity. So don't go bouncing balls close to a black hole). But alas, reality is often not ideal.

At impact, most of the kinetic energy is transferred to elastic energy in the ball (by its deformation) and not to the floor. Some energy is also converted to other forms like heat and sound. These other forms of energy, are mostly losses and they are not recovered thus making the ball bounce back to a lower height.

Surely there is some energy passed to the floor, but that's not very relevant for the process. Only the energy stored as elastic potential in the ball produces the force against the floor to send back up.

Not the answer you're looking for? Browse other questions tagged kinematics everyday-life spring or ask your own question.

8
Would it be possible to hop on top of a bouncing ball?
8
How to tell if the collision is elastic or inelastic?
6
Doubt in collision
5
Are there perfect elastic collisions in Nature?
-4
Is there a ball that bounces higher past the point that it is dropped?
0
Energy loss mechanisms for a bouncing ball

0
Experiment to measure initial speed of high speed tennis ball?
8
In tennis, why does topspin serve bounce higher than flat serve?
3
Intepretation of area under velocity-time graph for a bouncing ball
1
In terms of forces and kinematics, why does a projectile, thrown forwards, bounce forwards?
1
Kinematics of bouncing ball
0
Acceleration of a Bouncing ball when it hits the ground
0
What is going on at point A of this velocity-time graph of a bouncing ball?
1
If lower gear generates more torque at the wheel, why does it generate less acceleration/speed of the car compared to higher gear?
0
Confusion regarding ball bouncing off a wall with respect to Newton's Third Law