Suppose we have two bodies, one very large (Earth), and one very small (a cannon ball). If the cannon ball is some distance away from the Earth, to find out the force produced on the cannot ball, we need to compute an integral in three dimensions of how each infinitesimal piece of Earth pulls on the ball, i.e.

Newton showed that, provided that the large mass is a perfect sphere with uniform density, we can treat it as a point mass as well. This is not hard to do with an iterated triple integral.

Newton did not know about triple iterated integrals, and according to a physics book I have, devised a clever proof of this using a single integral only. Does someone know how Newton did this?

This theorem is Proposition LXXI, Theorem XXXI in the Principia. To warm up, consider the more straightforward proof of the preceding theorem, that there's no inverse-square force inside of a spherical shell: 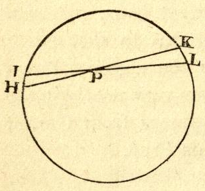 For a point mass outside a shell, Newton's approach is essentially the same as the modern approach: 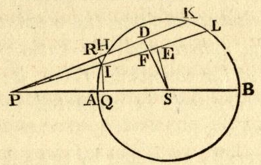 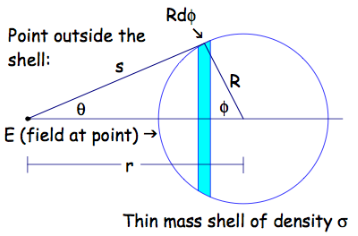 One integral is removed because we're considering a thin spherical shell rather than a solid sphere. The second integral, "as the semi-circle AKB revolves about the diameter AB," trivially turns Newton's infinitesimal arcs HI and KL into annuli.

The third integral is over all the annuli in the sphere, over $0\leq\phi\leq\tau/2$ or over $R-r\leq s\leq R+r$. This one is a little bit hairy, even with the advantage of modern notation.

Newton's clever trick is to consider the relationship between the force due to the smaller, nearer annulus HI and the larger, farther annulus KL defined by the same viewing angle (in modern notation, $d\theta$). If I understand correctly he argues again, based on lots of similar triangles with infinitesimal angles, that the smaller-but-nearer annulus and the larger-but-farther annulus exert the same force at P. Furthermore, he shows that the force doesn't depend on the distance PF, and thus doesn't depend on the radius of the sphere; the only parameter left is the distance PS (squared) between the particle and the sphere's center. Since the argument doesn't depend on the angle HPS, it's true for all the annuli, and the theorem is proved.

Not the answer you're looking for? Browse other questions tagged newtonian-gravity history integration calculus or ask your own question.