Why doesn't a block rotate due to friction?

In a horizontal surface, a block (cube) is sliding due to a sudden push. When the block slides, there is frictional force which is acting on the block.

If the friction gets great enough, the block can roll. Say you have a box sliding on ice that comes to the edge of the ice and starts sliding on dirt. The friction will increase considerably. You compare the torque the friction applies to the box against the torque required to lift the back edge against gravity. If it is greater, the box will start to roll.

The image below shows a rough diagram of the forces on a box just as it would begin to rotate. 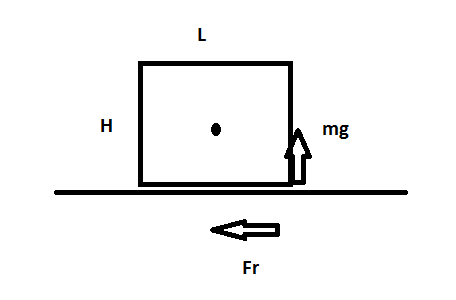 In this case we can consider the normal force to the surface as focused on the leading corner about which the box would rotate.

This results in 2 torques on the box. The first from friction which is causing the box to rotate $$\frac{L}{2}Fr$$

and the second due to the normal force which is in the opposite direction. $$\frac{H}{2}mg$$.

If the first is bigger the box will at least begin to rotate. Note it may not actually flip as the ratio can change as the box decelerates and begin to rotate. This will be true if $$LFr > Hmg$$ using the standard friction law we get $$L\mu mg > Hmg $$ $$H > L\mu$$

The normal force of the surface on the block supplies a counter-balancing torque. With regard to these torques, the system is static, that is, the block is not rotating. The normal force is able to provide whatever torque is needed to prevent rotation ... to a point. In some cases if you put a block on a plank and push the block it will slide, but if the coefficient of static friction is high enough, it will tumble instead. (Imagine that you are pushing with your finger toward the center of mass of the block so that your finger provides no torque around that point.)

If it helps, recall that the normal force is able to provide whatever magnitude of force is needed to prevent the block from accelerating downward (through the table, as it were).

Not the answer you're looking for? Browse other questions tagged newtonian-mechanics rotational-dynamics friction torque or ask your own question.

-2
Why do cylinders roll easily and not square or rectangular slabs?
3
Would this box on the floor rotate based on friction?
-3
Finding out the coefficient of friction
0
Toppling and friction

1
Why neglect friction when computing torque?
1
Rotational equilibrium Paradox
0
Toppling and friction
4
Why do skidding blocks tip over?
4
Torque - Why does a block topple and net torque when net force is non-zero?
1
Would the rod translate in this case, or only purely rotate?
1
2 block friction problem
1
Torque on a block on an inclined plane
1
Rolling of an object down a slope