What's the relationship between glow and arc discharge?

I'm trying to understand the differences between an arc and glow discharge. Most texts I have found on the Internet only describes the observed differences but doesn't really explain what happens on the atomic level in the two types of the discharge.

So what I know:

A characteristic of the normal glow discharge is that the voltage is stable, only the current changes, hence it's used as a voltage stabilizer.

As you increase the current through the glow, it tends to cover more area of the cathode. When it covered all of it, the voltage starts to increase to supply more and more energetic electrons, this is the abnormal glow.

What happens at point I in the graph below that causes the voltage drop again? 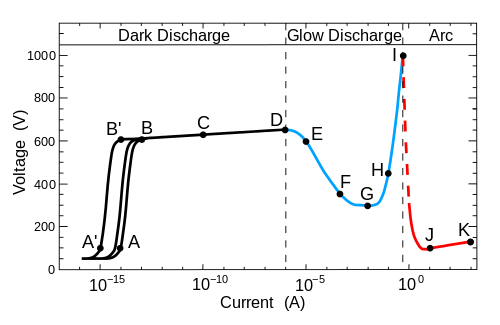 Glow discharge is often demonstrated with discharge tubes. Countless of youtube videos show amateur experimenters pumping down their tubes, causing initially an arc discharge which turns into a glow discharge as the tube pumped down, what causes this mode transition?

Whenever you turn on a compact fluorescent bulb it glows for a second then the discharge turns into an arc as the cathodes heat up and the bulb brightens up. I know hot electrodes emit more electrons, but why more electrons cause transition into the arc mode?

I suppose it's due to the same reason for all cases. Can anybody help me put the things together, so I can get the point?

The point "I" marks the transition from a low-current glow discharge, where the gas characteristics determine the behavior, to a high current arc, where electrode thermionic or high-field emission and even evaporation dominate.

Below is a "first-order" analysis of the transitions at points "D" and "I".

At low levels of current ("B" - "D"), what's happening here is that an electron emitted from the cathode collides with and ionizes gas atoms on its way to the anode, producing additional electrons, which can ionize additional atoms, etc. For $n_0$ initial electrons emitted by the cathode, with the cathode-anode spacing $d$, the number of electrons reaching the anode $n_a$ is: $$ n_a = n_0 e^{\alpha d} $$

It turns out that:

where $p$ is the gas pressure, $E$ is the applied electric field, and $f$ denotes a functional relationship. (So at constant pressure, as the applied voltage increases, $\alpha$ does also.)

Of course, each ionized gas atom results in a positively charged ion as well as an electron; these ions drift back to the cathode. (Total current $I=I_0e^{\alpha d}$ is the sum of the electron and ion currents across any plane between the electrodes.)

What happens when these ions reach the cathode is crucial to the dark current / glow discharge transition. When ions collide with the cathode, some fraction $\gamma$ will "kick out" a new electron from the cathode; $\gamma$ is the second Townsend ionization coefficient. With this effect included, the total number of electrons emitted from the cathode $n_{0t}$ is:

Note the feedback effect now present: each electron emitted by the cathode can produce additional cathode electrons via the two effects. Solving:

From this formula one can identify the Townsend criterion for a spark breakdown, where the total number of electrons (and the current) go to infinity:

What happens next depends on the source of electricity. If we were gradually increasing the voltage of a "stiff" source (one with low series resistance) connected directly across the tube, the "infinite" current when the Townsend criterion is met, would run away directly to the arc region beyond "I", bypassing the glow discharge region entirely.

The glow discharge current can be increased by reducing the external variable resistor. However, glow discharge current cannot be increased indefinitely. As the tube current and voltage increase, the bombardment of that current heats the electrodes, leading to increased thermionic emission from the cathode. With sufficient heating (i.e. at point "I"), cathode thermionic emission and material evaporation creates a lower-voltage "alternative" to the glow discharge, and a full-blown arc results. In this mode, the original gas in the tube is in a sense redundant; the arc can create its own plasma from vaporized electrode material.

[Note: there appears to still be uncertainty about the relative importance of thermionic and field emission in arc behavior.]

4
How are free electrons produced in a gas?

3
What's the second terminal in corona discharge?
18
What causes fluorescent light bulb to light up when it is near a plasma globe? Can this phenomenon be used to generate electricity in a circuit?
4
What phenomena occur in a low voltage arc between copper and graphite electrodes, and why is the result dependent on electrode polarity?
0
Air ionisation through insulated conductor
1
RF-sputtering: where comes the target self-bias voltage from?
0
Glow discharge : Why is the voltage stable with increasing current in the normal glow mode?
0
Relationship between Townsend Discharge and Capacitively coupled plasma
1
Why do gas discharge tubes operate indefinitely?(Or do they?)