proportion of solar radiation that reaches the earth surface

I have been following the methods suggested by members of this site to calculate the solar irradiance outside of the earth's atmosphere, see here.

I now want to calculate the solar irradiance reaching the earth's surface.

I calculate the irradiance outside the atmosphere as:

which results in the upper curve seen in the following figure, i.e. the energy curve for a black body at 6000K: 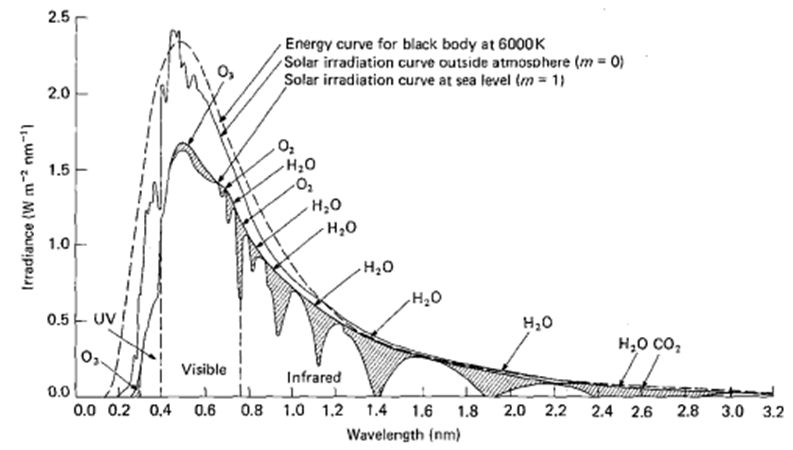 I now wish to generate a second curve, one that shows the irradiance at the earth's surface. I know that the scattering and absorption processes that take place in the atmosphere not only reduce the intensity but also change the spectral distribution of the direct solar beam.

Does anyone know how I could produce the curve explained above?

This is getting complicated. :) You have to make a lot of assumptions to make progress; you have listed most of them. I'll explicitly add an assumption that we consider only Rayleigh scattering (more-or-less consistent with "clear sky"), and that the atmosphere is pure N${}_2$.

Since this is homework, I won't spill all the beans.

What you need is the cross section for Rayleigh scattering: how much light does each molecule remove from the incident light. Given that, then you have to figure out what to do with it. This will involve figuring out how many molecules are in the way between the Sun and your detector.

I will say that there are web sites that present the results you need without your having to do the calculations yourself.

Of course, this won't give you any of the absorption bands that show up in your chart. And, of course, it won't account for the fact that the light hitting the top of the atmosphere only approximately follows the black body curve. I haven't done the exercise myself, but I suspect you will end up reproducing one of the main features of those data.

Since we're beyond homework: this Wikipedia page gives the Rayleigh scattering cross section for N${}_2$, and a value for molecular density, but it doesn't say if it's the average value or the value at the earth's surface. Nonetheless, that number can help in making order-of-magnitude estimates. At any rate, Rayleigh scattering goes as $\lambda^{-4}$, so when you take that into account you will multiply your result by $a\lambda^{-4}$ where a is some pre-factor that you don't know yet. You can try to make an estimate of the pre-factor using the data on that Wikipedia page, and perhaps some knowledges or guesses about the thickness of the atmosphere. (Or you can simply try different values for $a$ until you find one that works.) You might be able to model the fact that the solar data matches the b.b. curve for high frequencies, but not at lower frequencies.

Not the answer you're looking for? Browse other questions tagged homework-and-exercises or ask your own question.

3
Calculating the solar power hitting Earth
0
Finding the velocity at the time a particle reaches the center of the Earth
2
How far apart are two initially $1000m$ separated bodies that fall to earth from infinity, when the closest body reaches earth?
0
Calculating solar radiation toward earth