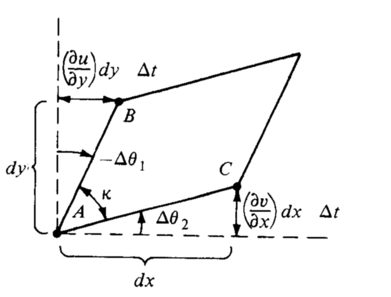 I am having trouble grasping the concept of vorticity. Above is a picture of fluid element under deformation (rotational). Say we ignore the vertical motion, which is $\frac {\partial {v}}{\partial x} = 0$. Which can be considered the case in the boundary layer close to a flat plate.

Assume flow is incompressible, and steady. Now the text says that above motion is rotating the fluid element. The problem I am facing is that after some time $\Delta \theta_1$ would grow larger, larger,... What happens after sufficiently long time. This would converge itself to straight line (approx.). So all rotations will cease after some time. But we know that rotations will keep happening.

My question is if the above picture is the way it is done, then after long time all fluid element will be a straight line, then how come rotation will keep happening in the fluid.

You may say that going to that asymptote line will take time $t \to \infty$. But then rotation is slowing down. But take this experiment. Say we have a laminar flow along a flat plate, and consider the area close to flat plate (boundary layer). Now if you place a vorticity meter in the boundary layer, you will be able to see that the meter is rotating with uniform (almost) angular speed. So somehow the fluid element is retaining it's own angular speed.

Where the hell am I wrong...? This is killing me!

So yes, if you mark a vertical segment between $(x,y)=(x_0,0)$ and $(x_0,\delta)$ at $t=0$, it will rotate and stretch with for asymptote as $t\rightarrow \infty$ it is the horizontal half-line from $(x_0,0)$. So will other vertical segments form any $x \not= x_0$. Remember this is a fluid, so you can picture yourself that liquid molecules will "intercalate" along the stretched lines as they collapse down to the horizontal. And rotation will continue to take place for the same segments but marked at some later time $t>0$ : thus for any given Eulerian fluid element (at a fixed position), the vorticity will be the same in a given shear profile.