This kind of problem has usually

NOTE: that the rod will rotate about a point with distance $c$ from the center of mass (in the opposite side from the impact point) located at $c =\frac{I_{rod}}{m_{rod} r} = \frac{\ell}{6}$. This is known as the instant center of rotation, and the point of impact is the center of percussion of the rotation center C.

One thing you can do is use conservation of angular momentum instead of linear - the point mass has angular velocity relative to the center of rotation of the rod. (If you are confused about this, imagine watching a car pass you on a road. The car moves in a straight line, but you rotate your head to follow it, giving it a [constantly changing] angular velocity.) Find the angular velocity of the particle the instant before the collision, apply conservation of angular momentum, and solve the problem from there.

The stroke of genius

The laws of Nature are wonderful: extremely simple - make a tremendously complex world, a few symbols can be extremely powerful and beautiful

all roads lead to Rome, you may go from London to Rome following many different routes, only a fool would get there via Moscow. But an eagle can fly over the Alps in a straight-line.

I'll try to explain what many readers do not understand:

....if you know shortcuts and are confident about applying them, by all means do. In my case, I could not understand exactly what he was doing so I chose to write a "pedestrian" answer for the benefit of other visitors

Visitors have not benefitted.

was fully and clearly explained last year, if there had not been a banal, trivial typo we would not be here now.

If the initial velocity is known, the unknown is $\omega$ 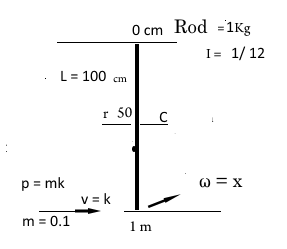 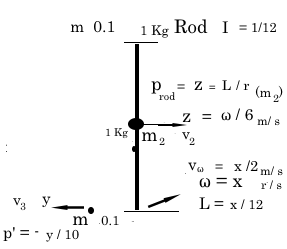 and we need 3 equations:

The solution of this problem 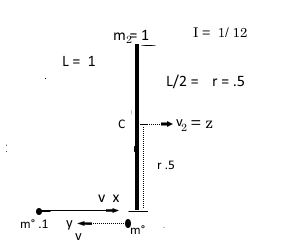 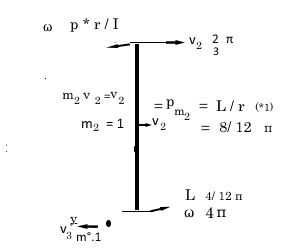 since the linear momentum of the rod is equal to its angular momentum divided by the radius (and mass which is = 1Kg) $$m_2v_2 = I\omega /r$$ This was reminded in a few comments, but no correction was made to the post

Using 3 equations instead of two is an unhealthy practice, and doing a monumental useless work is not only pedestrian but ... ehm... let's say: non-rational, and encouraging inexperienced or credulous visitors to do so is misleading

The correct standard solution has been offered as a first choice, but was apparently rejected by the vast majority of the 'visitors'.

The ingenious solution has probably been overlooked, not-understood or considered not-worth-examining-at-all.

But it so easy to understand: any schoolboy knows that the velocity of a body at rest after an impact is $v = 2p/ M$ 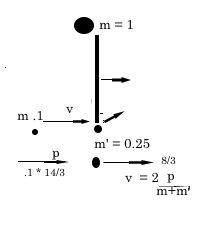 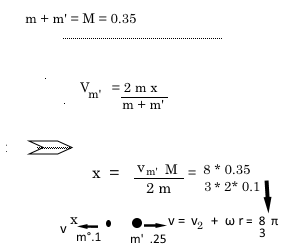 20
Does it take more energy to open a door when applying force close to the hinge?
5
Confusion regarding rotational motion!
5
How can I relate linear and angular motion using a single formula?
2
What is the initial angular momentum of a rigid body given an offset impulsed force?
3
Equation of motion for the center of mass of a rigid body
1
What point of application of force ensures more acceleration in a rod?
0
Calculate Spring Constant