Is there any way in which air can be made to reflect light? By making air denser or by any other way? The task is to project images in air...

Some of the molecules might have greater dimensions than the wavelength of light, but all the molecules won't reflect light, instead they might absorb. Even if some of the molecules do reflect, they appear so small, which will be difficult to detect from your naked eyes. Over all, the air in front of you appears transparent.

Even if you make the air denser, it is important to have most of the molecules which reflect the visible light rather than absorbing. I would say it is possible but not impossible. Some times smoke is spread to make a laser beam visible in college laser experiments.

Air does reflect light. That's how mirages come into being. Granted, this reflection takes place at relatively low angles of incidence and at a relatively sharp boundary between air layers of different temperature (and thus density and thus index of refraction), but it certainly happens. 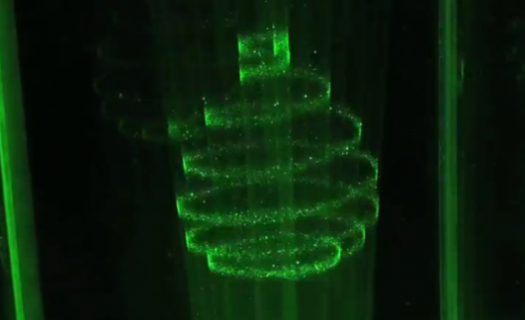 This is taken from here

This is an article from 2011, but I believe the idea is not widespread.

It may not be called reflection on air, but it is as close as you can get! What is done is that high powered laser are pulsated to generate light points by making plasma excitation in atoms of oxygen and nitrogen in the air.

Not the answer you're looking for? Browse other questions tagged reflection air or ask your own question.

1
What is the theoretical range of temperature the air must be in order to reflect/refract light (for a volumetric display)?

2
Can electrons within a positive ion absorb and reflect light?
1
Can something not reflect visible light?
0
Best glass to reflect visible light (mainly Green)
2
Why do mirrors reflect light while regular surfaces don't?
3
Does light reflect from silver because of the difference in refractive index?
29
Why don't opaque objects reflect light?
53
What wavelengths of light does a banana reflect?
1
What is the theoretical range of temperature the air must be in order to reflect/refract light (for a volumetric display)?