In this question I am talking about the following situation:

Now, I know that the max kinetic energy of the electrons emitted is

where $\phi_{em}$ is the work function of the emitter electrode (on the left in the diagram). And my lecturer agrees with that, but he tells us that the stopping potential $V_0$ can be found using

What I don't understand is why the stopping potential doesn't depend on the kinetic energy of the emitted electrons.

I have attached the slide from the lecture course 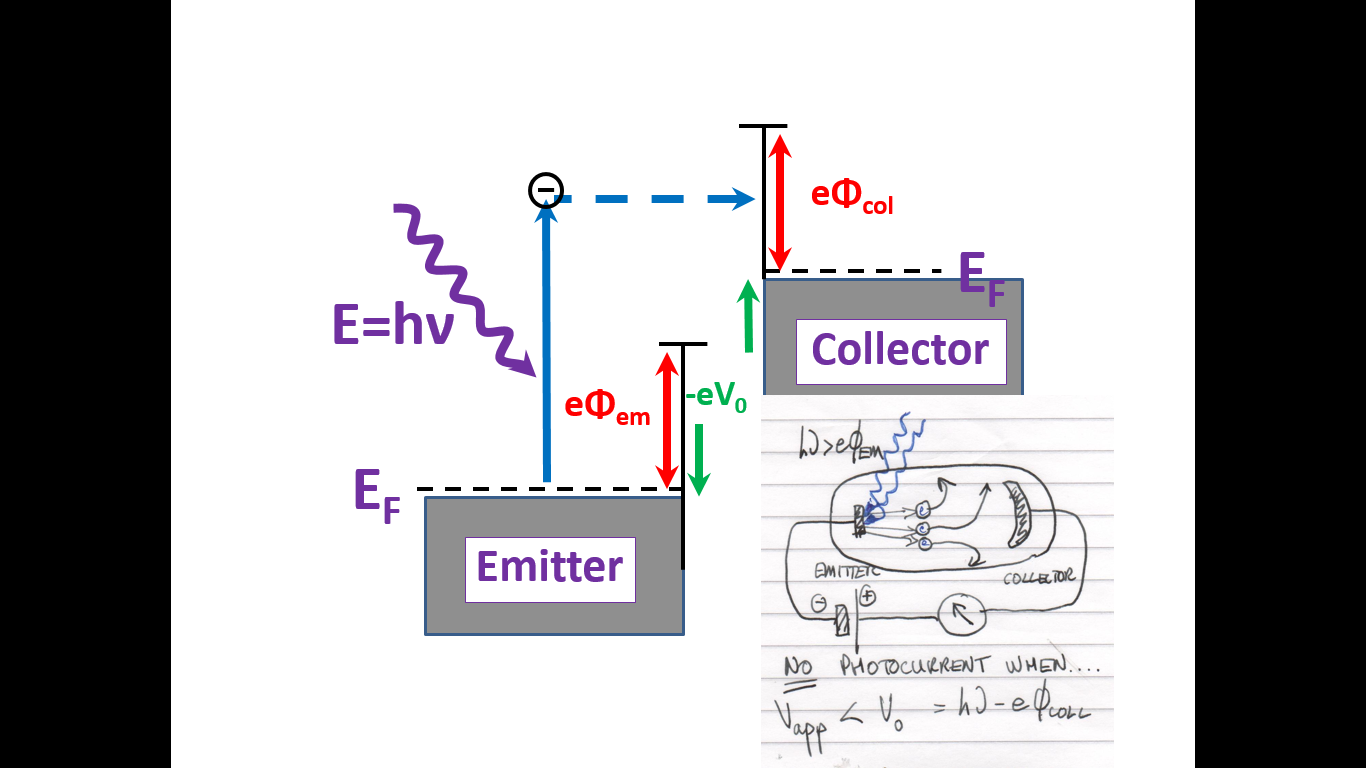 The proper way to treat this is to say: the kinetic energy of the emitted electron is $h\nu - e\phi_{emitter}$, as the electron flies towards the collector it sees an uphill potential and so decreases its energy by $e[V_{stop} + (\phi_{collector} - \phi_{emitter})]$. Now, by definition of the stopping potential, $h\nu - e\phi_{emitter} - e[V_{stop} + (\phi_{collector} - \phi_{emitter})] = 0$ (i.e. electrons arrive with zero K.E.). So we see the emitter's work function cancel out and rearranging we get Einstein's equation with the collector's work function instead!

The energy diagram you are drawing plots the total energy of the electron (K.E. + P.E.). So if you think about it, energy conservation is the same as saying that the level of $h\nu$ matches that of $e(V_{stop} + \phi_{collector})$. The emitter's work function simply does not play a role in determining the stopping potential!

There are some subtleties: we assumed that all the electrons emitted were near the Fermi level, but this is of course not a bad approximation at room temperatures, so it's fine. Now here's the thing, even in theory there are unequal numbers of electrons sitting at a given energy inside the collector (the density of states for a free particle scales as $\sqrt{\epsilon}$ in 3D), so experimentally you will find that the I-V curve does not have a sharp stopping potential, but has a so called 'Fermi tail' tending to zero current. This complaint of Einstein's theory is well documented, with articles dating back to the 1920s (Millikan).

So while Einstein was technically wrong in this aspect of the photoelectric effect, he did get the photon bit right which won him the Nobel!

Hope that clears things up!

P.S. For future generations: if you are from a certain London college, your professor is indeed correct!

As you already stated, the maximum kinetic energy is given by $$K_\text{max}=h\nu-e\phi_\text{em}$$ In order to stop an electron with this amount of kinetic energy, you have to impose an electric field such that it will lose exactly this amount of energy while traversing it, so that it stops just slightly before reaching the other end of the setup shown in your picture.

The energy gained or lost by a charged object traversing this static electric field is given by the simple formula $$\Delta K=q(V_\text{final}-V_\text{initial})$$ In the case of an electron, $q=e$, while the difference in potential can be denoted by $\Delta V\equiv V_\text{final}-V_\text{initial}$ Now, if we want to stop the most energetic electrons, but only barely, we have to make sure that $|\Delta K|=K_\text{max}$. Let us denote the corresponding potential difference, the stopping potential, by $V_0$. Then, we obtain $$\Delta K=K_\text{max}=eV_0=h\nu-e\phi_{em} $$ As you see, we are only considering the most energetic electrons when we want to make sure all of them are stopped. This explains why the velocity does not appear as a variable.

According to a fellow student, the photoelectron has to overcome the difference in work functions, $e\phi_{col}-e\phi_{em}$, before entering the collector electrode. I made a more detailed energy level diagram to fully illustrate the components involved here. 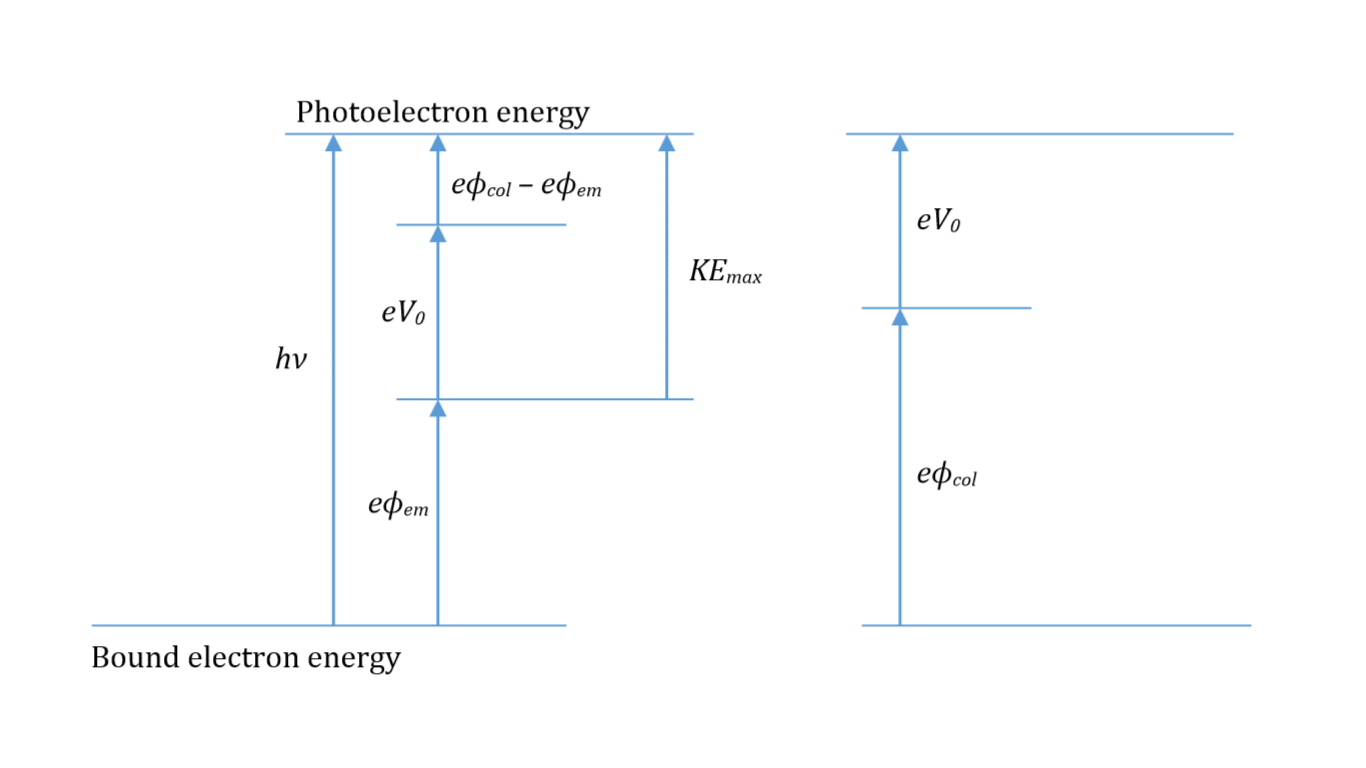 On the left: the full details. On the right: what the professor told us.