Is it possible to tell whether the space ship is moving or not?

Consider a space ship which is not under any force. Being inside the space ship, I will make a robotic fly from the platform to crawl inside using my remote. For simplicity assume that space ship will be drifting at uniform speed only under forward direction with respect to me, or else it will be under rest. The following experiment is assumed to be done in vaccum.

From the top, the first image is of space ship. Assume that I am at point A and the robotic fly to be beside me as shown.

In the second image, I will make the insect just to lift up and I will stop its engine, as the robot is not under any force it will not fall down, it will stay where it was. As the fly will continue to be under same motion as the space ship, I will not be able to tell whether my ship is moving or not.

In the third image and fourth image, I will apply force to the robotic fly to move little back and I will stop its engine. 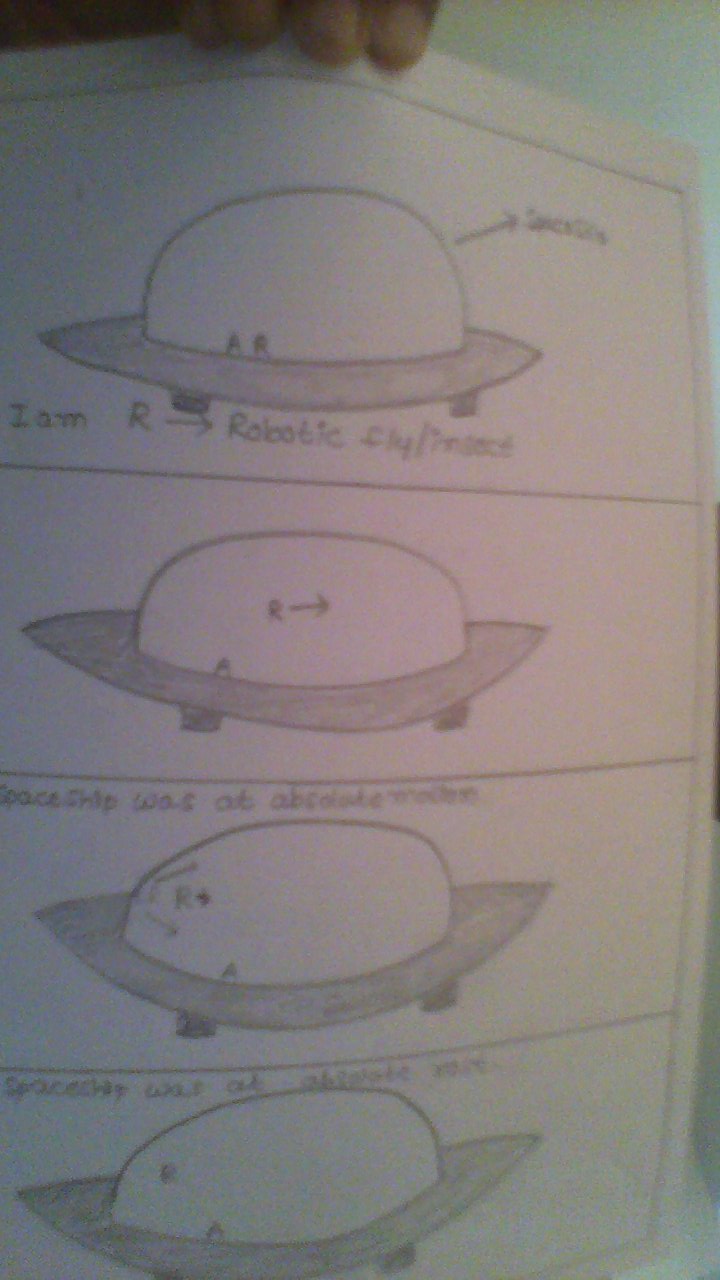 But, according to Feynman:

The principle of relativity was first stated by newton, in one of his corollaries to the laws of motion: "the motions of bodies included in a given space are the same among themselves, whether that space is at rest or moves uniformly forward in a straight line." This means, for example, that if a space ship is drifting along at a uniform speed, all experiments performed in the space ship and all the phenomena in the space ship will appear the same as if the ship were not moving, provided, of course, that one does not look outside...........in a moving space ship the electrical and optical phenomena should be different from those in a stationary ship.

Hoping that my above experiment is neither optical nor electrical, my experiment is in contradiction with the Feyman's explanation. From my experiment, I am able to say whether the space ship is moving or not. How is it possible?

You seem to be totally skimming by conservation of momentum. 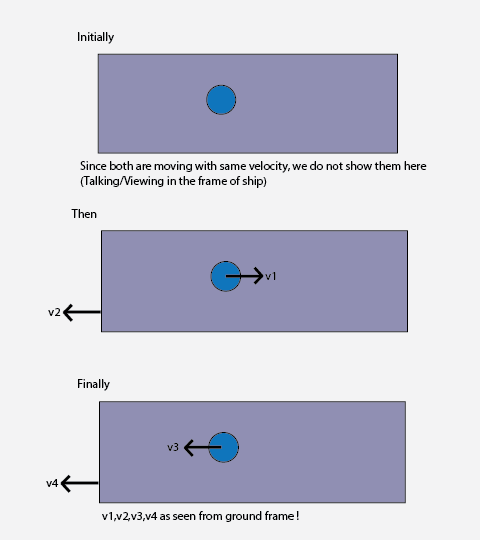 Let's look at your situation initially, if you look from there frame it does not matter whether they are at rest or moving with constant velocity.

If you just see in there frame, then to move the robot forward you have to push the spaceship back otherwise momentum will not be conserved and it needs to be conserved since there is no external force.

Now if you change the velocity of robot by any means, still the momentum has to be conserved, so again we get

This time relative velocity will be

A negative velocity implies it will collide in the back wall!

Addendum : After reading your comments I think I can help you a little more.

If you make the fly move then that requires a force. This force will not be alone, it will have it's pair that would act on the ship. Since ship is massive it would gain lesser velocity than the fly and the fly would crash.

Now if you want to stop this moving fly, then again you need a force which would be equal to the previously applied force just in the opposite direction. This force two will have its pair which would act on the ship. This pair of forces will bring both fly and ship to halt and now fly will not collide with any wall.

If the ship is at rest and you apply a force to the fly, it will crash against the wall.

If you make the fly stop, you have to apply a force in the opposite direction. In the moving frame, this would mean the have the same speed again.

It's difficult to refer to your drawings because they are blurred and pale.

However, I think that your confusion might come from the fact that you do not specify (and seem not to take into account) whether there are other forces (than its own engine controlled by you) acting on the fly, like the ones present on earth. So is there any resistance to the motion instilled by air or gravitation?

This is all I can tell based on your description.

Not the answer you're looking for? Browse other questions tagged reference-frames relative-motion galilean-relativity or ask your own question.

4
Is it possible to counter-act centrifugal force by moving at the same speed in the anti-spin direction?
14
How can Newton's idea of absolute space be reconciled with Galilean relativity?
1
What makes an object to be at rest?
3
Can we really not tell if we are moving?
0
Theoretical question on frames of reference
0
Why can't we tell, we are moving?
1
How does Inertial force arise?
-1
How do we actually feel special theory of relativity?
1
Do curved spaces always have a preferred rest frame?