Where does this equation originate from? (found in the Big Bang Theory)

Recently, I've been watching "The Big Bang Theory" again and as some of you might know, it's a series with a lot of scientific jokes in it - mostly about Physics or Mathematics. I understand most of the things mentioned in the series and whenever I don't understand a joke, I just look up the knowledge I'm missing on wikipedia - e.g. I learnt about Schrödinger's cat in this way.

However, at one point, I did not know how to proceed, which is why I'm asking this question. At a Physics quiz, the participants are asked to "solve" the following equation: 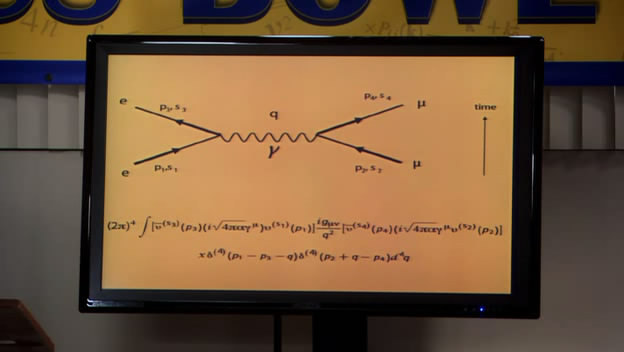 The solution turns out to be $-8 \pi \alpha$. My questions are: What is the meaning of this equation? How does one obtain it? And of course, how does one solve it and is the solution given by the university janitor (in the series) correct?

Also, I am sorry if this is an equation found in Physics, I didn't know.

This is a so called Feynman diagram you see on the board. It is a suggestive way to write the formula written below the diagram. Each aspect of the diagram directly translates to part of the formula via the so called "Feynman Rules"

With Feynman diagrams you can calculate the "amplitude" (that is related to the quantum mechanical probability for a process to happen). In this case the process it electron muon scattering. As you can see initially there is a electron and a muon (the lower part of the diagram where the time arrow starts). The electron is on the left and carries momentum $p_1$ and spin $s_1$. This translated to a so called spinor $u^{(s_1)}(p_1)$ in the formula.

Now since electrons and muons are electrically charged (both are have negative charge), they will repel each other via the electromagnetic force. The "force carrier", also called gauge boson of the EM foce is the photon $\gamma$, the quantum of the EM vector field $A_\mu$. The electron and muon exchange a photon carrying momentum $q$ and represened by the term $\frac{-ig_{\mu\nu}}{q^2}$.

The strength with which the electrons and muons couple to the EM field is given by $-ie\gamma^\mu$, or as written here using the fine structure constant $\alpha$: $-i\sqrt{4\pi\alpha}\gamma^\mu$.

From these parts you construct an electron "current"

which get couple by the photon. I.e.

which is why you get

The Lorentz indices and sign of the photon propagator in the screenshot are wrong btw.

Not the answer you're looking for? Browse other questions tagged quantum-field-theory mathematics or ask your own question.

7
Are the solutions in radicals of cubic and quartic of any use in physics?
8
Are there 'higher order moments' in physics?
3
What really are perturbation expansions?
4
Where this polarization vector is coming from?
8
Where does Field Theory come from?