How does an electron “move” in an $s$-orbital?

I have read multiple answers on StackExchange about this question, but I wasn't able to find a concrete answer. Like other questions, the reason I ask about the $s$-orbital is because it has a zero orbital angular momentum. But, the implication of having a zero angular momentum is unclear? Some answers discuss probability distributions, but the question is how can there be multiple places for an electron, if it can't move. I read another answer that says that the electron passes through the nucleus or curve around it as a wave. I would appreciate it if anyone could provide a resolution to this question.

For me the physical implication of zero angular momentum is that the electron's probability distribution is spherically symmetric. At the deepest level, the angular momentum property in quantum mechanics describes how something transforms under rotations (see Noether's theorem). Although this is quite an abstract property, in the case of electron orbitals it relates to something extremely concrete and amenable to visualisation: namely, the shape of the angular probability distribution.

Any interpretation based on classical concepts is doomed to fail at some point. In this case the confusion arises from imagining that the electron is in a certain "place", or that it "moves". The only truly useful description of the electron that has been found is the quantum wave function, and its corresponding probability distribution.

Elementary particles are not particles in the sense of a billiard ball, with a specific (x,y,z) trajectory. They do not move in solutions of classical mechanics problems. That is why they are called orbitals and not orbits. They have a locus in space described by a probability function which is equal to the square of the wave function of the solution. 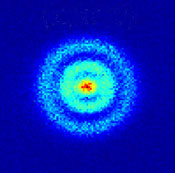 They have measured hydrogen orbitals with an ingenious microscope , so the electrons are not in orbit, but in a distribution in space

Atomic distances, as in the image, are of the order of 10^-10meters, the proton in the picture is localized at diameters of 10^-15 meters . As this involves volumes, the S state probability distribution does go through the locus of where the proton is , with a very small probability of interaction. At that point one should solve the problem with second quantization, no longer the simple Schroedinger one . There exist studies of this.

The case of the positronium, which has similar solutions to the hydrogen ones, and lives for a while and then annihilates is an experimental proof of the S state passing through the center of the potential.

Also electron capture from the S state is observed in proton rich nuclei.

Not the answer you're looking for? Browse other questions tagged quantum-mechanics electrons atomic-physics orbitals or ask your own question.

6
How to think about speed or velocity of an electron (in an atom)?