Why is the phase velocity used in the definition of the refractive index?

I'm aware of the so-called group index but why is the phase velocity used in the standard definition of the index of refraction? What advantage does this offer?

optics refraction phase-velocity
Share
Improve this question
edited May 30, 2014 at 21:44

Well at the most fundamental level, the index of refraction of a material is defined as

where $\epsilon $ is the electric permittivity and $\mu$ is the magnetic permeability of the material.

This arises from the solution of Maxwell's equations in a medium.

Worth noting is that since $c_m$ is always less than $c$ , the index of refraction is always greater than 1.

So after a little algebra, we find that the wave vector and index of refraction are related by

Where does all this come into play in refraction and Snell's Law? Well, it is the wave vector that comes into play in satisfying the boundary conditions on the electric (and magnetic) fields at the interface between two media.

To see this, let's look at the simple case of a plane wave of monochromatic light incident on the interface between two media with indices of refraction $n_1$ and $n_2$: 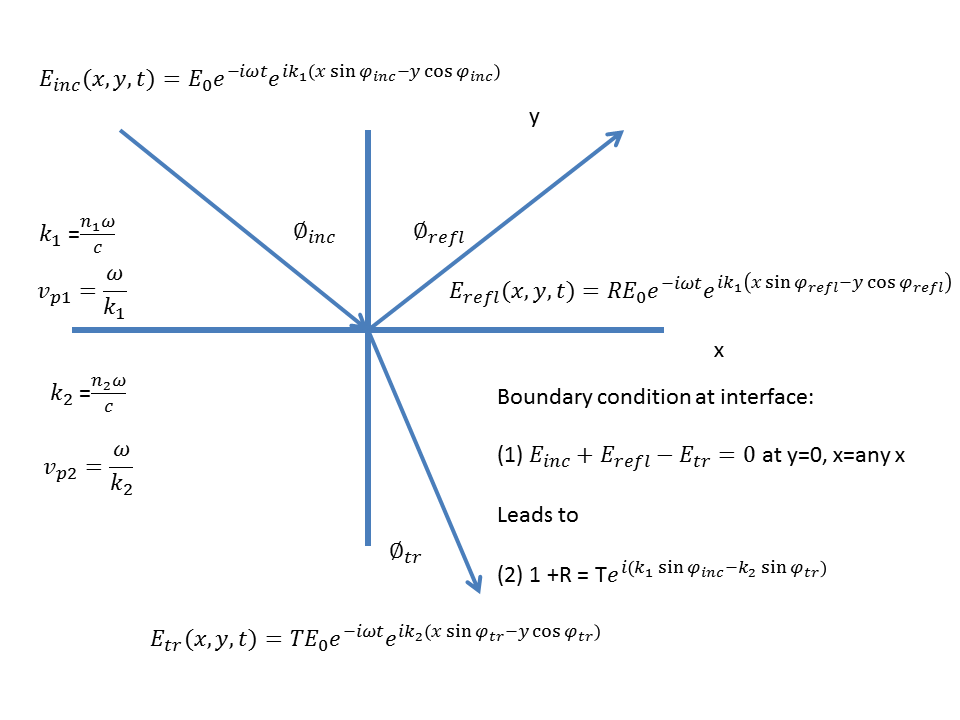 In this simple case, considering the boundary conditions on the electric field at the interface is sufficient to derive Snell's Law.

Since we defined y=0 as the plane of the interface, this boundary condition must hold for any value of x. This leads after a little algebra to equation (2) in the diagram. This equation depends only on the angles of incidence $\phi_{inc}$ and refraction $\phi_{tr}$, the wave vector magnitudes in both media $k_1$ and $k_2$, and the transmission and reflection coefficients $T$ and $R$ ( the fraction of energy that is transmitted into the new medium and reflected into the old medium respectively). By symmetry, $\phi_{inc} = \phi_{refl}$.

Because the left side of Equation 2 is independent of angle, so must the right side be. This leads to the term in the exponential being zero, which leads directly to Snell's Law, using the relation between wave vector and index of refraction shown above.

The group velocity never comes into play in the boundary conditions of refraction. It does come into play in the propagation of energy in the media (as opposed to the fields), but that's another question.

Refraction is the phenomenon where light bends when it enters a medium, as described by Snell's law. The amount of bending depends on the phase velocity. I don't know the real linguistic history, but I bet that is why somebody came up with the term "index of refraction" or "refractive index" to refer to "c / phase velocity".

Next, the term "group index" is a combination of the word "group" (suggesting the relation with group velocity) and the word "index" (suggesting its analogous mathematical form to refractive index).

Refraction can be described by the Huygen's-Fresnel principle just like diffraction. In this interpretation it is an interference phenomenon with every point on the wave front acting as a source, and the light propagating only in those directions where the phases reinforce.

And this is the key point. The phase change in a distance $d$ is given by:

Not the answer you're looking for? Browse other questions tagged optics refraction phase-velocity or ask your own question.