Electron energy in a synchrotron storage ring vs. X-ray energy from the wiggler: why is the latter much lower?

I know in large synchrotron facilities some beamlines produce very intense X-rays by injecting the accelerated electrons into "wigglers". I have read that the typical energy of the electrons in the storage ring is about a few GeV, but the energy spectrum of the X-rays generated in the wiggler is in the range of keV. One may expect that the X-ray spectrum had energies up to the incident electron energy (like in a conventional X-ray tube). Why is this not the case?

The X-ray radiation is Bremsstrahlung radiation created when the electrons are accelerated in the wiggler.

In an X-ray tube the electrons are accelerating (well, decelerating) from their initial energy to zero when they hit the target. So the energy of the Bremsstrahlung radiation is comparable to the initial electron energy. In the wiggler the acceleration is lateral to the beam direction and is tailored to a required value by adjusting the magnetic field strength. The acceleration, and therefore the wavelength of the Bremsstrahlung radiation, is not directly related to the beam energy.

Typically the wiggler is being used to generate a well characterised beam for research purposes, so the acceleration of the electrons will have been tuned to make the intensity peak at the required wavelength. For example there is little point in producing X-rays with an energy of several GeV to do X-ray diffraction because the wavelength would be far too short. For X-ray diffraction we typically want a wavelength of about 0.1nm, which is 10-15keV.

X-ray tubes are generally designed such that the electron beam knocks out inner shell electrons in the target (e.g. copper K shell), resulting in well-defined lines in the output spectrum. There is also a bremsstrahlung spectrum but depending on what you want to do, it may be less useful due to its broadband nature.

Wiggler/undulator radiation is purely due to acceleration. When dealing with synchrotron radiation, it's conventional to define the critical energy $$E_c = \frac{3}{2}\frac{\hbar c \gamma^3}{\rho}.$$ Gamma is the relativistic gamma and rho is the bend radius. Half the total energy is emitted above $E_c$ and half below, hence the name. The spectrum is found to be $$ \frac{d^2 N}{ds\,dx} = \frac{\sqrt{3}\,\alpha}{2 \pi} \frac{\gamma}{\rho} \int_x^\infty K_{5/3}(\xi)\,d\xi $$ which is messy because of the modified Bessel function. See reference 2 and/or Jackson for details. The following plot gives the power spectrum in terms of the critical energy. (I made this plot using the method described in ref 2, which is actually implemented in GEANT4.) 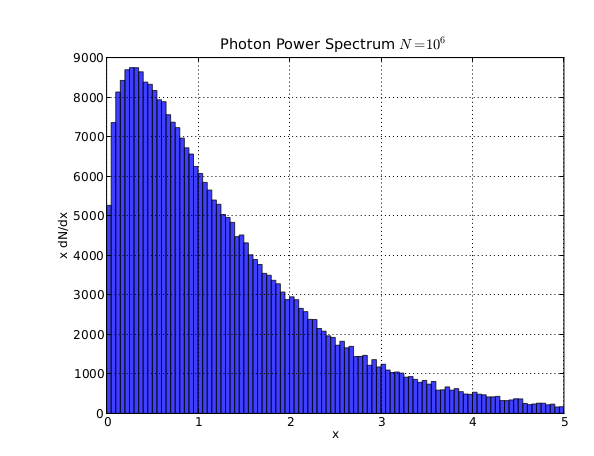 Note that this spectrum neglects the spatial distribution.

Not the answer you're looking for? Browse other questions tagged x-rays accelerator-physics synchrotron-radiation or ask your own question.

3
Medical X-rays energy spectrum
0
Why is the storage ring of a synchrotron a vacuum?
6
Does the Advanced Photon Source use electrons or positrons?
1
How do accelerated ions with remaining electrons in the shell produce synchrotron radiation?
1
X-ray emission spectrum modelling of a tungsten target anode at 40 kVp
0
Alternative way of bending electrons trajectory in synchrotron
0
How linearly additive are the x-ray mass attenuation coefficients for molecules?
5
Difference between an electron wiggler and an undulator?