Simple Harmonic Motion - What are the units for $\omega_0$?

I'm trying to understand the units in:

What I don't understand is why my book says $\omega_0$ has the unit $rad/s$, I get that the input for cosine is $rad$ or some other angle measure, but where did the radians come from?

My analysis of units only proved $1/s$ as the actual units..!

I have just been informed that radians are dimensionless. So, that answers part of this question, yet I still don't know why we can't say that dimensionless one in degrees or rotations..? How do I know what kind of cosine and sine table to use with this dimensionless number?

Ah, good question. The radian is actually a "fake unit." What I mean by that is that the radian is defined as the ratio of distance around a circle (arclength) to the radius of a circle - in other words, it's a ratio of one distance to another distance. For an angle of one radian specifically, the arclength $s$ is equal to the radius $r$, so you get

The units of distance (meters or whatever) cancel out, and it turns out that "radian" is just a fancy name for 1!

and then you would go to a trig table in radians (or your calculator in radian mode) and look up 7.85.

However, suppose that you were measuring $\omega_0$ in degrees per second instead of radians per second. You would instead have

One way to think about this is that angular measures in radians are really just ratios of like quantities: $\theta$ in radians is, by definition, the ratio of the length of a circular arc subtending $\theta$ to the radius of the circle. So a radian is really a meter per meter.

In practice, when doing dimensional analysis in physics, this means that you can slip radians into and out of your units with wild abandon. For instance, if a circle of radius $r$ is rotating at angular speed $\omega$, then the speed of a point on the rim is $$ v=r\omega. $$ The right side of this expression has units of m rad/s, and the left side has units of m/s. But the units balance, because a radian (or a m/m if you prefer) is dimensionless.

In addition to all the above extremely well written answers, especially by David Z and Ted Bunn, let me tell you how you can visualize the origin of the $rad/s$ in your dimensions for $\omega_0$.

First, we note that a simple harmonic motion is similar to a uniform motion on a circle. To see how, we will work with a specialise case where the particle is pulled to a distance $r$ away from the mean position and released and we start our clock when it is passing through its mean position i.e. $x=0$ when $t=0$. Thus we get the equation of motion as $x=r sin(\omega t)$.

Next we draw a circle with radius $r$ and centre at the origin, and place the particle at $(r,0)$. We then let the particle move at a constant angular velocity $\omega$. 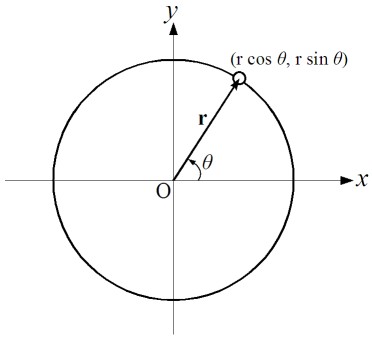 If we now look at the parametric coordinates of the particle when it is at an angle $\theta$ from the X-axis, we get its current position. Concentrating on only the Y-coordinate, we see that it corresponds to $y=r sin\theta$, or in terms of $\omega$, we have $y=r sin(\omega t)$. Hmm... looks almost like the equation of the second paragraph. Infact, if we look at another particle that can only move along the Y-axis and coupled to this particle, it actually does the exact simple harmonic motion we had with our spring system. Thus, uniform circular motion is exactly analogous to simple harmonic motion, and applying this analogy to our equations, we see that $\omega$ can be defined as the angular velocity of the particle and ths has dimensions of $rad/sec$ (since $\omega$ is by definition $d\theta/dt$).

But when doing physics, its actually better to have the arguments of the trigonomtric functions as dimensionless. Why? A look at the Taylor series of the $cos$ function might help :

PS: There was a time when physicists actually let the angular frequency $\omega$ have the dimensions of $rad/sec$, to differentiate it from normal frequency $\nu$ or $f$ with a dimension of $1/sec$. But, nowadays its more natural to use $\omega$ for all frequency purposes because it fits more naturally into quantum mechanics, fourier transforms, special relativity etc.

The importance of radians is "not" in its dimensions. It is necessary to mention whether $\omega_0$ is in radian/sec (and not just 1/sec) because angles can be expressed in various units - degrees, radians, etc (all which are dimensionless) and unless we know in which unit $\omega_0$ is expressed, we cannot do mathematical operations on it, like finding its sine or cosine, etc.
For example: $sin(60^o)$, where 60 is in degrees, is totally different from $sin(60^r)$ where 60 is in radians. So, it is "very" important to always mention $\omega_0$ in radians/sec rather than just 1/sec.

(This is the reason why $\omega_0$ is called as angular frequency and not just frequency, although both have the same dimensions.)

$\cos{(w_0t)}$ will be a solution of the given equation with $w_0=\sqrt{\frac{k}{m}}$ only if $\frac{d}{dx}\cos{x}=-\sin(x)$, which it will only be if $x$ is in units radians. If $x$ is in units degrees or grads there will be a dimensionless conversion constant, $\frac{d}{dx}\cos{x}=-C\sin(x)$. The convention that we use radians is so geometrically natural that it's close to hard-wired for mathematicians and physicists. I think the two Answers that appeared just as I started to write this are wrong in principle to take 1 radian=1, but in practice taking the radians unit to be dimensionless is unlikely to get you into trouble. Nonetheless, there's a reason why this is an international standard. Nice Question.

I find it helpful to use rad in units to understand these mechanical properties:

The unit for spring constant k for a torque spring (clockwork spring) is N.m, but call it (N.m)/rad and it is easier to understand: "Torque per angle".

Also N.m is "formally" the same as J, and this can make it hard to distinguish from torque, especially when the work is associated with a rotational movement. It helps then to think of Joule as N.m.rad, meaning "torque times angle turned" analog to the way work from linear motion is "Force times distance traveled".

I would never call Joule anything else than J in documentation, it just helps to think about it that way.

Just a thought, rad is of course "1" and can be left out at will. I do not see how leaving out rad would lead to confusion with degrees. In engineering, degrees is used as a unit all the time, but never without the little degree sign °

Radians are a unit of Angle, in a trigonomentric sense, which brings repetition with rotation (cycles & revolutions). There are other units of Angle, such as the degree.

SI defined the radian to be it's Base Unit, and then gave it the name "Supplementary Unit" to get out of an impasse between factions. In those days calculations were often done with pen and paper, and dimensional analysis was split out (the Calculus) and done separately. Some have even suggested you can take the tangent of 12 inches! (so says the Calculus).

The issue is that the Base Unit of the metre is not a dimension. Rather it is a measure in a 3d space.

This means that you can divide one dimension by another different dimension (e.g. height, the direction of gravity, by the width) and get an apparently dimensionless number.

The "Angle Dimension" concept is simply a way of recording that we previously had two dimensions (Lx, Ly), and now we (would) have none.

We would never allow Temeperature / Time to be cancelled just because they have the initial letter T.

Many modern computer algebra systems (Mathcad, Mathematica, Maple) do cope with the auto conversion between units and check the resulting dimensions, with scaling, to support many science and engineering calculations. However all are stymied by Torque vs Work because the Angle unit is missing. The Torque problem extends into mechanical CAD systems as well.

The ability to label and check the apparently "dimensionless" numbers is a sad loss.

Also note that there are no named dimensions at all in mathematics, so don't let them tell you that oft repeated mantra "Obviously all angles are in radians" without a little bit of thought and challenge.

E.g. Look up the Cordic algorithm, which is defined on the eight of a turn (45 degrees) where tan(45deg)=1, what a convenience! (i.e. the regular sin(x)=x+.. is just another convenience!)

Not the answer you're looking for? Browse other questions tagged harmonic-oscillator units rotation dimensional-analysis or ask your own question.

2
Does the unit of Inertia include radians?
1
Confusion with units of angular velocity
16
Why are radians more natural than any other angle unit?
4
What are the units of the creation and annihilation operators?
0
Simple harmonic motion confusion
1
Optimization problem and measurements

16
Why are radians more natural than any other angle unit?
187
Are units of angle really dimensionless?
7
Correct way of solving the equation for simple harmonic motion
1
What are the units for the C parameter in the formula for surface excess concentration?
6
Why does $\sqrt{\frac km}$ represent angular velocity and not frequency?
2
Dimensional analysis with derivatives, logs, exponents and trigonometric functions
7
Why revolutions (or turns) are dimensionless?
4
Simple oscillator displacement, speed, and acceleration diagram
3
Units of damping terms for harmonic oscillator