What is difference between white objects and transparent objects as far as photons are concerned?

Transparent materials let photons through because the energy gap of electron is so large that the photons cannot be absorbed. If the material absorbs a photon, the photon disappears; does this mean that its appearance is opaque? How about the colour white? In this case, does the material absorb photons?? Because white materials seem opaque most of the time.

A white object indeed absorbs photons, since you can't make light pass through. It is white because the absorbed photons are re-emitted and the absorption/re-emission process efficiency is more or less the same for all the visible wavelength: red light is re-emitted with the same rate as blue light. Of course the object will look white as long as you are illuminating it with white light.

A macroscopic piece of glass is transparent because, as you say, the band gap is higher than the energy of visible light. However a pane of glass only lets about 95% of the light through because 5% is reflected at the air/glass interface. This reflection is due to the refractive index change at the interface, not to any absorption of light.

If we now grind up our piece of glass into a fine powder it will change from transparent to white. The glass is still not absorbing any light, but on its way through the powder a ray of light will encounter many air/glass interfaces and at each interface 5% of the light will be reflected.

After hitting only 13-14 grains 50% of the light will have been scattered. 100 grains will scatter 99.5% of the original light. These numbers are obtained from:

where $n$ is the number of times the light is reflected from an air/glass interface.

So if the powder is fine the light falling on it will be multiply reflected and scattered into random directions. This is why the powder looks white. The direction of the reflected light is randomised. Actually the refractive index, and therefore the reflectivity, changes with wavelength but the change is too small to have a noticable effect on the colour of the scattered light.

A material can be both transparent and white.

Take a cloud for instance. Clouds can be pretty white, but they consist entirely of transparent water droplets. 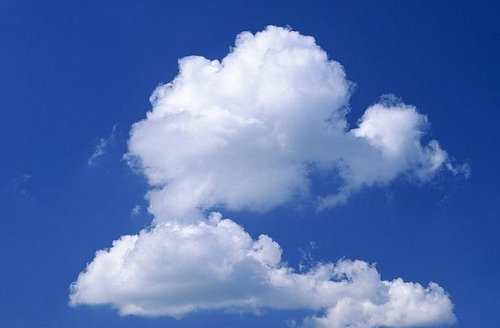 Something looks white if 'equal' amounts of red, green and blue light are coming from it. This can happen in one of three ways:

Emission A white light looks white because roughly equal amounts of the three primary colours are emitted from it.

Absorption / Re-emission A material can absorb light, but re-emit it at the same wavelength. If it does this with similar efficiency for all the primary colours, then, when the material is illuminated with white light, it will re-emit white light in all directions.

Scattering A single prism can refract the three primary colours in different directions, essentially splitting them up. A cloud consists of trillions of tiny transparent prisms. Each one takes any incident light, and sends it back out at a slightly different angle. When light enters a cloud, it interacts with thousands of prisms, each one sending the light off in a slightly different direction, mixing it up. Eventually, some of the light finds its way back out of the cloud, and into your eye. Although each prism refracts the three colours differently, they don't absorb them much at all, and each colour experiences 'a lot' of scattering, i.e. the same amount of scattering, and so the cloud appears white.

There are three different things that objects do to incident photons. Absorb, reflect and transmit. Absorption is when it atoms of the object absorb the photons so as to enter into an excited state or a higher energy level (they get hotter). Reflection is when these photons are given out or reflected by the same atoms. In the case of a white object all wavelengths (colours) of light are reflected. This process is completely different from transmission wherein the atoms simply do not absorb the photons as their energy is too low. So while transparent materials transmit light, white materials reflect it.

Not the answer you're looking for? Browse other questions tagged visible-light photons vision material-science or ask your own question.

25
Why is snow white when water has no color?
2
Absorption of photons
2
Transparency and visibility of light in tyndall effect
0
Why do pores make ceramic opaque?

8
Transparency of solids using bandgaps and relation to conduction and valence bands
8
What "happens" to the energy of a photon after it is absorbed?
0
Why doesn't electron-photons interactions and the principle of quantum superposition cause most things to be transparent?
13
What is the difference between a transparent material and an opaque one at the atomic level?
2
How do materials absorb light
0
Bubbles (water) are transparent, then how can they produce white light in mass amounts?
2
What determines if a photon is absorbed or not, i.e. if an object looks black or coloured?