Young's Double Slit Experiment : What would happen if the "first slit" was too wide?

I was wondering what would happen to the fringe pattern displayed on the screen if the first slit (as shown in the picture), which is also known as "single slit", was made a bit wider. I read it in my book. I don't understand it. Anyway, it quotes

Please answer the question in your own words and try to explain to me what the quote is trying to say. Also, when it says "parts", what does it mean?

I hope the following diagram is a "picture worth more than a thousand words": 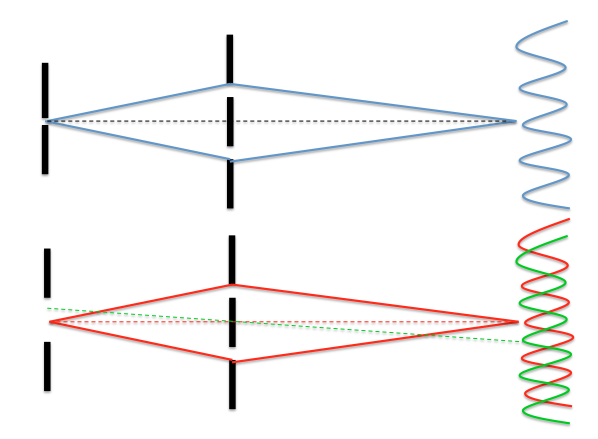 As you can see, a "narrow" first slit gives all the light incident on the pair of slits a very definite direction - and therefore a very definite location of the fringe pattern.

When the first slit is wider, the light could be hitting the double slits in multiple different directions. Each direction gives rise to its own fringe pattern; the sum of these patterns is a pattern with reduced contrast.

This link should help you understand further

Please post the name of the book so we can burn all copies. That's some of the worst wording I've ever seen!

About the only thing I can guess is, assuming it really is referring to slit $S_0$ , is that the author is claiming that widening the slit will change the curvature of the light waves reaching the 2-slit plane.

I would like to point out as well that the setup in the picture is very nonstandard, as the light entering slits $S_1$ and $S_2$ has significant curvature and is propogating in different directions. The standard 2-slit experiment assumes a near-planar incident source. So unless these two slits' widths are extremely small, the exiting wavefronts will propogate rather differently from the curves shown in the picture.

Stick with the derivation in Weasel's link, or a text such as Smith, Modern Optical Engineering.

Whenever light passes an edge then on a screen behind the edge appear fringes between the shadow and the exposed area. The first slit in your sketch is nothing else as the sum of two edges. And we use the composed central fringe from this slit as a point-like source.

So the sense of the first slit is to get a point source of light. Otherwise the light from different sources - or from a wide source- overlap each other behind the double slits and the fringes will be blurred.

I would like to ask since I don't have enough points to comment but, overall since the single slit is wider, it allows non-coherent waves and waves of different wavelengths to enter through the single slit, which causes different fringe patterns to form when they go through the double slit and these fringe patterns overlap and cause a reduction in contrast on the screen.

Not the answer you're looking for? Browse other questions tagged homework-and-exercises visible-light double-slit-experiment diffraction or ask your own question.

3
Why aren't interference patterns wiped out by random phase shifts?
1
Why is there interference in double slit experiment when there are many out of phase photons concurrently?