Some people refer to cosmic microwave background's (CMB) frame of reference as an absolute one. If I understand correctly, we can measure 'absolute' velocity in this frame by using the Doppler effect. However, I don't know how we can know what the 'basis' frequency of CMB is (in its own frame)? Can it be obtained by some quantum-cosmological consideration?

special-relativity cosmology cosmic-microwave-background
Share
Improve this question
edited May 27 '14 at 21:44 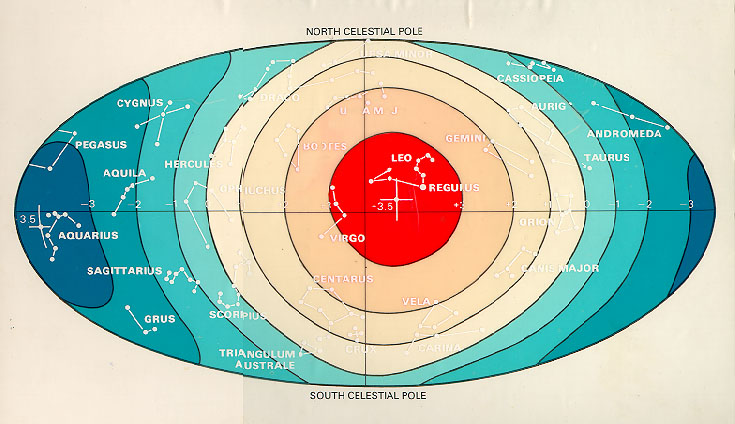 The velocity of Earth relative to the CMB frame is measured by observing the anisotropy of the CMB temperature.

The above data is the is the anisotropy of temperature of the CMB as measured by NASA U2 airplanes in the 1970s.

Note: in the figure red means hotter and blueshifted, blue means cooler and redshifted. The contours are 1 millikelvin intervals.

The "basis frequency" (as the question calls it) of the CMB would be the frequency of the temperature with zero anisotropy. Really it is a black body frequency distribution of temperature 2.725K.

Not the answer you're looking for? Browse other questions tagged special-relativity cosmology cosmic-microwave-background or ask your own question.

1
Are we comoving observers of space expansion?

7
Can an “absolute” frame of reference be determined by measuring the compression of light?
12
What will we see between the CMB and the current oldest object seen?
13
Assuming that the Cosmological Principle is correct, does this imply that the universe possess an empirically privileged reference frame?
5
Do oceans produce the cosmic microwave background?
2
CMB absorption by interstellar medium and contamination with galactic microwave photons
1
How is this conflict about age of the universe resolved?
3
Finding the CMB temperature anisotropies contributed at different orders due to a uniform boost
5
Results of WMAP mission
1
Cosmic microwave background dipole anisotropy