What does the data in various stages of analysis from a particle collision look like?

I've been following the news around the work they are doing at the LHC particle accelerator in CERN. I am wondering what the raw data that is used to visualize the collisions looks like. Maybe someone can provide a sample csv or txt?

Different pieces of equipment will produce somewhat different looking data, but typically it consists of voltages defined as a function of time. In some cases (spark chambers, for example) the "voltage" is digital, and in others it is analog.

Traditionally, the time series for the data is slower than the times required for the (almost light speed) particles to traverse the detector. Thus one had an effective photograph for a single experiment. More modern equipment is faster but they still display the data that way. Here's an LHC example: 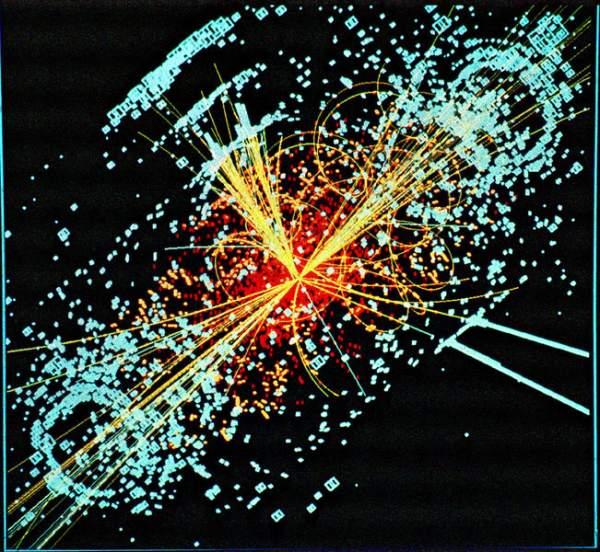 In the above, the data has been organized for display according to the shape and geometry of the detector. The raw data itself would be digitized and just a collection of zeroes and ones.

Note that some of the yellow lines are curved. Actually all of them are curved at least some. This is because there is a strong magnetic field. The curvature of the particle tracks helps determine what particles they are. For example, given the same speed and charge, a heavier particle will run straighter.

Energy measurements are generally analog. In them, one gets an indication of how much energy was deposited by the particle as it went by. In the above, the light blue and red data are energy measurements. For these measurements, one doesn't get such a precise position, but the amplitude is very accurate.

Years ago, as a grad student in particle physics, I used to work on the PHENIX experiment at BNL. Before I had shown up (I think near the end of run 2) the main data structure used for analysis was called a "tuple". Tuples were pretty much like the lists used today in Python with a bit more structure to make access faster and contained the actual data corresponding to what we called an "event" (something interesting that happened in the detector which was captured by the various subsystems and written eventually into a tuple). Unfortunately tuples were generally just too large and one needed to analyze a smaller subset of the entries in the tuples -- so micro-tuples were born and then shortly afterwards nano-tuples.

There were different types of nano-tuples defined and used by the various working groups on the experiment which had different subsets of the original tuples. Which type of nano-tuple you used depended on the analysis you were trying to do and roughly corresponded to the working group you were in. In my case this was heavy flavor where I was studying charm.

where the x_i would be all the different quantities of interest associated with the event: transverse momentum, energy deposited in the EM-cal, blah, blah, blah..

In the end the data analysis revolved around the manipulation of these nano-tuples and amounted to:

The truth is that we rarely looked at the RAW, raw data streaming out of the detector unless you were on shift and part of the data acquisition system had stopped operating for some reason. But in that case the data was pretty meaningless when you looked at it. You'd be more concerned that the data wasn't flowing. However if you were one of the people responsible for maintaining a subsystem (say, EM-cal) then you'd probably be doing calibration on a regular basis and regularly looking over raw data from your particular subsystem to tune the calibration and make the raw data analyzable.

Mostly the raw data was only meaningful for the subsystem you had a responsibility to and looking at all the raw data from all the subsystems as a whole wasn't really done. I don't think anyone had that kind of breadth across all the different subsystems...

Regarding the data for the visualizations you asked about: I believe these were specially defined nano-tuples which had entries from enough of the subsystems to allow for reconstruction and the final visualization (pretty pictures) but I'm 99% sure the visualizations weren't created from the "raw" data. Rather they were done using these nano-tuples.

If you poke around the PHENIX website you can see some pretty fancy animations (at least fancy for back then) of collisions in the detector. Mostly these pics and movies were part of a larger experiment wide PR effort. They were made by a guy named Jeffery Mitchel and you should email him to find out more details on the format of the data he used (mitchell@bnl.gov) Everyone was talking about the LHC back then (2004 or 2005ish) and most of them have long since moved on so you can probably get more insight into the "raw" data created by the LHC today and used for those visualizations if you ask someone like him directly.

Not the answer you're looking for? Browse other questions tagged particle-physics large-hadron-collider particle-detectors data or ask your own question.

4
A reference request for real world experimental data
2
How do they draw collision pictures in Atlas?
2
What is your prefered toolkit / program for 3D visualisations of data?
1
How are the standard model and the Higgs boson actually confirmed experimentally in practice?