Time travel outside of light cone without causality violation

If one is able to travel into the past but at a spatial distance that puts him outside of his own past light cone would this be considered a causality violating trip? Looking at a Minkoski diagram, it would seem that one ought to be able to travel to a spatially displaced past without producing causality violations. In fact, I'm not sure you could even say whether this was the past of not for sure. 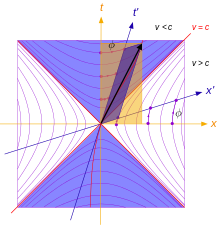 For instance: If you found a one way wormhole, that took you outside of your own lightcone but into the past, could you say for sure that you traveled through time? Would this be a form of timetravel that did not violate causality? Note; I'm not necessarily suggesting that it is an FTL trip, it may be considered to be instantaneous teleportation, but in the reverse direction of x'.

Outside the light-cone, distances are spacelike and not timelike.

By definition, a spacelike distance is neither in the past nor the future. By itself, this would not create any causality violations.

Since wormholes (as shown in other answers) could set up a scenario where you do violate causality, I think you will find you cannot use wormholes to travel outside of your light-cone.

The problem is that if you had two such wormholes, you could still end up in your own past light cone. For example: suppose I took a wormhole trip to Alpha Centauri, leaving in the year 2050 and arriving in 2049 (according to some fixed inertial reference frame). Since Alpha Centauri is 4 light years away, this doesn't take me into my past light cone. But suppose I then find another wormhole on Alpha Centauri that takes me back to Earth in the year 2048. This is also a "faster than light but backward in time" trip that doesn't take me into my own past light cone. But now I'm back on Earth two years before I left, and I can wreak havoc on the space-time continuum by murdering my former self, etc.

Now, there are ways you could still get around this. Basically, you have to come up with a reason why the reverse trip I've described isn't possible after all. You could say that there is only one wormhole of this kind in the whole universe, for example. But then you'd have to explain why, of course; as far as I know there isn't any actual theory that would predict something like this.

In general, if you want to keep Einstein's postulate (for which there is a huge amount of empirical evidence) that the laws of physics are the same in every reference frame, it's going to be very difficult to come up with a theory that allows me to travel this way in one direction (to Alpha Centauri) but not the other (back to Earth again). This is why travelling to any region of space-time other than your future light-cone is generally considered a causality violation.

If you have a theorie that only one such wormhole can exist at a time, it implies space time would have to "keep book" about your original light cone, and your new one. Because you could travel there without any causality violation, stay there for a year, the old wormhole long collapsed and gone and somehow find a new one, somewhere else which will then collide with your original past... And it's not even about any particle travelling back which has to be prevented. What about information? It would be enough if someone else would travel the other way and you would tell him to murder your former self. So noone who can at any way interact with you could travel the opposite direction, or any direction from which he could than travel to your past...

Not the answer you're looking for? Browse other questions tagged special-relativity spacetime causality time-travel or ask your own question.

19
Why does the speed of light totally prevent instantaneous information exchange?

1
Wormholes and the illusion of time?
2
Is a non-accelerating object far from a gravity source moving at the speed of light through time?
1
Would one-way FTL travel be safe from a causality standpoint?
0
Causality (time travel) question