Is there an inconsistency between Quantum and Classic in probability density of harmonic oscillator ground state?

Is there a inconsistency between Quantum and Classic in probability density of harmonic oscillator in it's ground state? Is the correspondence principle valid here? 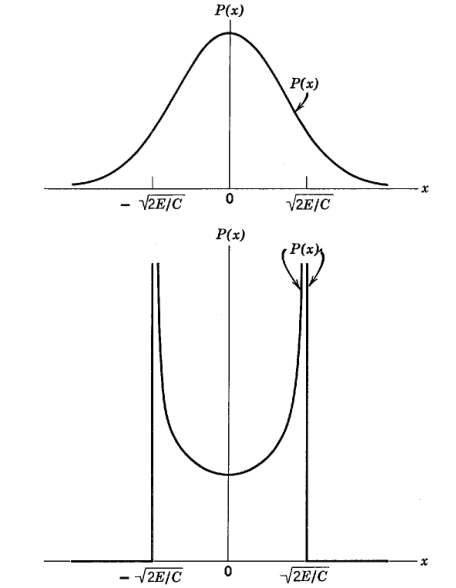 The correspondence principle is valid here, though it may not be immediately apparent from observation of the lowest order mode of the quantum mechanical oscillator. The higher order modes, by contrast, begin to redly display this feature as you increase the principle quantum number n. The following line of Mathematica code (taken from the Neat Examples section from the Plot function documentation) represents the probability amplitudes for the quantum simple harmonic oscillator:

Plotting a series of these (which is also given in the documentation), gives the following:

As you can see, as you increase the quantum number (shown as an increase in height), the probability density actually starts to favor the region farther from the origin, as in the classical case. In fact, I've plotted the probability amplitude for n=50, which gives the following: 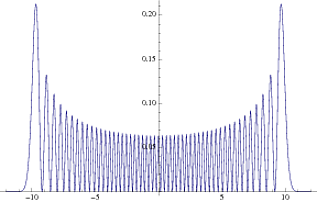 As you can see, this is much closer to the classical probability density. Naturally, this trend increases as we move to even higher n values.

A simple answer to your question is provided by the Wikipedia link you gave to the correspondence principle:

In physics, the correspondence principle states that the behavior of systems described by the theory of quantum mechanics (or by the old quantum theory) reproduces classical physics in the limit of large quantum numbers.

The quantum number of the ground state of the SHO is zero. Consequently, while, as the answer above showed, the correspondence principal does hold quite nicely, it is by definition not necessarily meaningful in the ground state.

Consider that you are comparing the ground state wave function to the classical case of a moving particle. The classical case corresponding (as much as possible) to the ground state would be the harmonic oscillator at rest, a delta function probability distribution. Consider a higher energy state (limit of high quantum number) to make a better comparison. See for example:

Not the answer you're looking for? Browse other questions tagged quantum-mechanics classical-mechanics or ask your own question.