In this youtube video, a pool shark consistently gets the cue ball to drastically change direction mid-roll (i.e. while after he's hit it). Is this theoretically possible without using trick balls? If so, how? If not, why not?

It would work in a vacuum, so I'll simplify by assuming no air resistance.

When the ball is hit, it spins in a certain direction, for example to hit the ball so that it would follow this path: 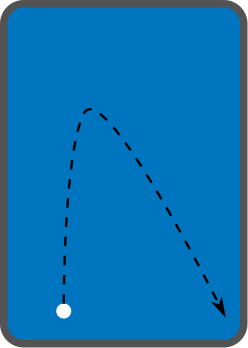 requires the ball to be hit along the red arrow, but spinning in the direction of the blue arrow:

The red arrow here is pointing the same way as the initial direction of the dashed black arrow on the first picture.

As the ball travels forward it is "slipping" on the table. This means that the ball is moving over the table but it is rubbing past, not rolling smoothly, like a car skidding to a stop.

The rotation of the ball will slow down as it travels but so will the ball's speed, so initially it will look like this:

Not the answer you're looking for? Browse other questions tagged newtonian-mechanics angular-momentum rotational-dynamics friction collision or ask your own question.

9
What determines whether a pool ball will bouce backwards after colliding with another pool ball?
8
Why does a ping pong ball change direction when I spin it on a table?
1
Where to hit the pool ball such that it satisfies the given condition?

1
What controls whether a ball will skid or roll?
25
What determines the angle of the cushion on a pool table?
9
What determines whether a pool ball will bouce backwards after colliding with another pool ball?
13
Changing Rotation Direction in Mid Air
1
Why does a ball roll?
5
Why doesn't the 9th ball move in the break in the nine-ball pool game?
1
Rolling ball travelling in tube with loop vs straight tube
2
Why doesn’t a ball “roll” straight down the wall?