Meaning of "Simple" in Simple Pendulum and Simple Harmonic Motion?

I have gone through the Phys.SE question Can a simple pendulum be considered a simple harmonic oscillator?. From the 1st answer of this Question it seems to me that another type of "Harmonic motion" is "Damped Harmonic Motion".

But can you please explain what the other type of Pendulum is? Is this Compound pendulum or Damped Pendulum or Something else? 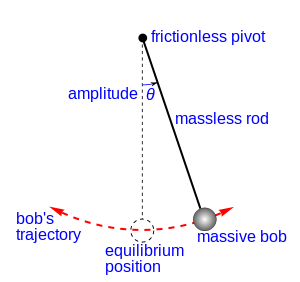 This pendulum gives the easiest way te look at harmonic motion. The above case is what they call the simple pendulum.

If you want to further complexify it, you could drop the assumption that all of the mass is in the bob and add inertia to the picture (so a real-life pendulum). This kind of pendulum is called the physical pendulum (or compound pendulum), the swinging body is no longer considered a point mass, but a mass with finite measurements. An example (compared to the simple pendulum) is given on the figure below.

This also leads to equations using Newton's second law applied on angular momentum (just as the ones which were used to derive the equation for the simple pendulum).

Not the answer you're looking for? Browse other questions tagged newtonian-mechanics terminology harmonic-oscillator oscillators or ask your own question.

1
Can a simple pendulum be considered a simple harmonic oscillator?