In the case of riding a bicycle, why can the system of the bicycle and rider be accelerated if no external net force?

According to Newton, if no external net force acting on a system then the system will keep its initial condition whether at rest or moving uniformly in a straight line.

Let's consider a boy riding a bicycle. He exerts a force to the bicycle and the bicycle reacts with the same magnitude but opposite direction to the boy. From an observer outside the system of boy-bicycle, the net external force acting on the system is always zero so there will be no acceleration. However, in our daily life, we have seen that accelerating a bicycle is possible. It seems to me inconsistent, doesn't it?

What is wrong with my argumentation above?

You're neglecting the interaction between the bicycle and the ground. If I start riding my bicycle to the east, the Earth rotates a tiny bit towards the west to compensate. Because I and my bicycle are small and the Earth is enormous, it's usually a good approximation to consider the Earth as fixed and immovable.

There are forces and torques in this system. Boy pushes on pedal and pedal pushes on boy. But for pedal to push on boy, bike frame pushes on pedal (at the axle of the pedals) and vice versa. Now there is a torque on the pedal which is transferred (through the chain) to the rear wheel. Rear wheel pushes on road, and road pushes on wheel (in the forward direction - because there is friction). Wheel pushes on frame. Frame pushes saddle. Saddle pushes boy. Boy moves with the whole bike.

I left out a few steps (like the fact that the torque is balanced by a different vertical force on rear wheel than on front wheel, or that angular momentum is conserved because of the force of the bicycle on the earth...) but I hope you get the idea.

Here is a little picture showing just some of these forces. In particular, the blue arrows correspond to forces from outside the "boy-bike" system: namely, the vertical force on the wheels (which stops the bike from disappearing into the earth) and the horizontal reaction force due to the force of the wheel on the earth (not shown) which in turn is a response to all the torques (described above - just some of them shown): 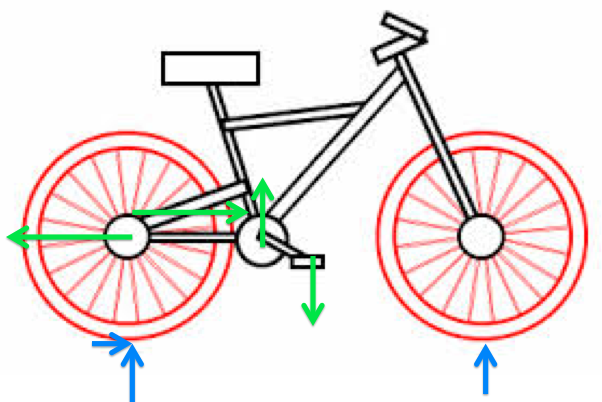 Your assumption that there are no external forces is incorrect. There is the force of friction between the wheels and the ground. It is this force that is responsible for the acceleration. If you could remove this (as the other posters suggested) with ice or suspending the back wheel of the bike (as in my bike trainer), you would indeed go nowhere.

2
How does Newton's law apply to a person throwing snow onto their snowbank at the side of their driveway?
0
Usage of momentum conservation during collision of 2 blocks 1 connected to a spring (at rest) and other hitting with a velocity
0
Why can internal forces be disregarded considering the motion of the center of mass of the system?
0
If the ground reaction force does no work, then how can I stand up from a crouched position?
0
How does the system of particles respond to the external force?
1
What is the physical meaning of torque about an axis outside the body?
1
How does a box have a net force of zero when it is on the ground and has an oscillating spring in it?