Are photons electromagnetic waves, quantum waves, or both? [duplicate]

Are photons electromagnetic waves, quantum waves, or both?

How can individual quantum waves combine to form the macroscopic observable of an electromagnetic field?

electromagnetic-radiation photons
Share
Improve this question
edited May 20 '14 at 15:10

Are photons electromagnetic waves, quantum waves, or both?

A great ensemble of photons build up the electromagnetic wave.

This experiment has been done with lasers bringing down to individual photon strength in this double slit experiment: 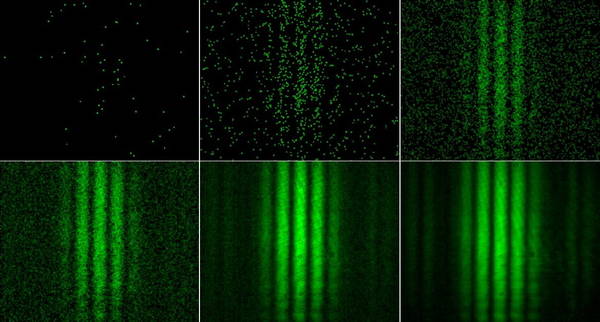 The movie shows the diffraction of individual photon from a double slit recorded by a single photon imaging camera (image intensifier + CCD camera). The single particle events pile up to yield the familiar smooth diffraction pattern of light waves as more and more frames are superposed (Recording by A. Weis, University of Fribourg).

How can individual quantum waves combine to form the macroscopic observable of an electromagnetic field?

It needs some strong math background, but handwaving:

Both the classical electromagnetic wave and the quantum photon rely on solutions of maxwell's equations. The individual photons carry information about the frequency ( E=h*nu) and the spin and electromagnetic potential in the equation, since the quantum mechanical wavefunction of the photon ( which gives the probability distribution of the photon) and the classical wave depend on the same equations. There is a coherent synergy and the zillions of photons add up to give the classical wave.

66
Is the wave-particle duality a real duality?
1
Is the photon first a wave, then a particle?
37
Do photons occupy space?
0
Photon Quantum Field proportional to Electromagnetic Field?
2
Does a high energy photon experience deceleration or direction-change when it impinge into water or something due to the change of refraction index?