Is it possible to produce gamma radiaton using radio emitter?

As in the title, I'm wondering is it possible.

I think it is possible, because we have powerful enough radiotechniques and gamma radiation are just EM waves, not particles. However I think is useless, because it costs too much.

Can anyone say something more about this?

Is it possible to produce gamma radiaton using radio emitter?

Unlikely. A 'radio emitter' consists of, at least, some type of antenna and a transmitter to drive that antenna.

The size of the antenna is related to the wavelength of the transmitted radio wave, e.g., half-wave dipole, quarter-wave monopole.

But the wavelength of gamma rays is less than the diameter of an atom. 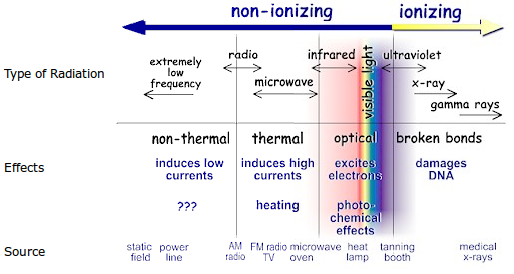 In essence, "this is not the radio you were looking for". An x-ray machine is a form of "radio", but it is not something safe to use because the high energy damages human tissues and DNA. Repeated exposure to listening to that x-ray station would cause mutations and cellular damage way beyond just hurting your ear drums.

Jokes aside, the "radio" would have to work on a very high frequency to achieve ionizing radiation, not high power levels. The above graph illustrates the equation that energy is proportional to frequency $E=h v$

Thermal energy (via RF/Microwaves) can be added to a substance via non-ionized radiation in large amounts and perhaps the target material will produce some ionizing radiation in a burst (like blackbody radiation), but it would not release much in comparison to how much thermal energy you would have to generate to do this. Ionizing radiation for medical devices use kinetic energy of accelerators to move particles up to ionizing levels and it is much more efficient.

It appears I'm not making myself clear, so I'll try one more time.

"Antennas" for this discussion is a structure designed to radiate EM waves at a specific frequency. And you can build antennas $>\lambda$ unlike Alfred's claims. Antennas work at multiples of $\lambda$ as well as fractions of $\lambda$. Engineers tend to avoid larger antennas ($>\lambda$) in radio frequency bands for radiation pattern simplicity and smaller sizes. Here's a link showing multiple $\lambda$ designs with different radiation patterns.

You can't produce ionized radiation directly from non-ionized energy levels. The transition between non-ionizing and ionizing levels make this impossible to do without introducing a 3rd process to boost the energy level of some target substance which you are going to ionize and/or accelerate. Size of the radiator (or antenna) is not really relevant. Energy is the issue and how matter responds to higher levels of energy excitation.

The 0.51 MeV photon from positron-electron annihilation is considerd a gamma ray and industrial X-Ray tubes emit photons that are over 1 MeV. So there is some overlap in the terminology. If your radio produces electric fields of 500 KeV or more, there is SOME way to make gamma rays come from something loosely called an antenna.

For example, your antenna could be a cyclotron or a modified Klystron tube. You can transmit X-Rays with an old improperly used vacuum tube and an automobile spark coil.

In the typical analysis of RF antennas, the electrons in the metal shake back and forth and create EM waves in the far field. If you shake the electrons harder and they bump into things, you can get X-Ray/Gamma-Ray radiation. Is there an energy gap between radio and X-Ray? I have never seen an antenna that shoots yellow light. However, a number of novel techniques have emerged in the last 20 years and I wold doubt any proof. I recall a proof that the X-Ray LASER was impossible, then Dr. Teller showed an arrangement of tungsten rods pumped by a nuclear explosion. You never know.

There are no known transistors or oscillators yet produced that can handle 10^19 frequancies, we are still experimenting at terahertz range 10^12 or thereabouts so the simple answer is no.

It is extremely exciting when people describe the operation of a weapon without understanding it. Or its purpose. The problem is currently the lack of energy. The described are about what they can do. No, what will it feed? Actually, nobody gives such a devastating device to the public any detailed blueprints. The one who creates the first ... sets Einstein and Ede Teller behind the line.

Not the answer you're looking for? Browse other questions tagged electromagnetic-radiation classical-electrodynamics radioactivity electronics radio or ask your own question.

6
References for Radio Imaging?
0
Is it possible to make an RFID-like device which responds to a metal detector?
7
Astronomical-wavelength radio (AWR) transmissions between cosmic plasmas?
3
What does an analog voice transmission look like in the visible spectrum?
19
How do you make a spherical radio wave?
27
How can wifi penetrate through walls when visible light can't?
0
Radio Magneto Tellurics: role of reflection
2
What is the relationship between the amount of radioactive substance and the harm it does to the body?
1
Wavelength and penetration by EM radiation