Does the speed of medium affect the path of light? 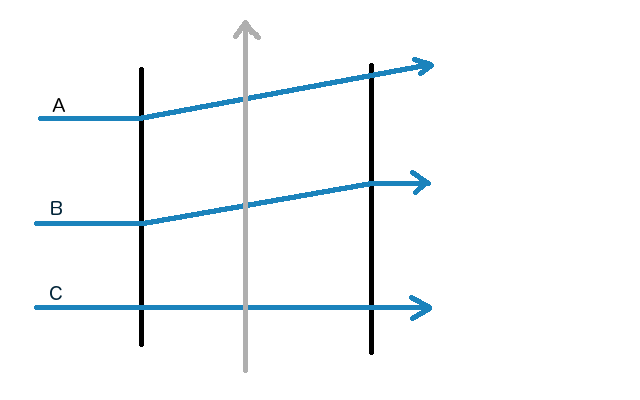 (Note: left and right sides of the image are stationary mediums, center is a medium moving in the direction indicated by the arrow)

Which of the above scenarios (A, B, C, or "I'm way off") correctly reflects the path the light will take (even if the translation is incredibly small)?

To answer some good questions (and things I left out of the original question):

Light passing through a moving medium undergoes a shift due to the difference in frames between the two media. This problem is quite simple to solve in the frame of the river. In this frame the light is moving at an angle and the river is still. The air is moving relative to the river but since air has an index of refraction of $1$, its movement doesn't have any effect on the behaviour of light. Then you can use the ordinary Snell's law and finally boost back to the original frame.

The only subtlety here is that we are in some sense using both the particle and wave viewpoints of light since we will discuss momenta as well as Snell's law, however I can't see an issue with doing so.

I denote the lab frame without a prime and the river frame with a prime.

To find out how the light will behave once it exits the river we note that the angle of incidence at the second interface is the same as the angle of refraction in the water (still in the river frame). We have, \begin{equation} \sin \theta _{ \mbox{out }} '= r \sin \theta _f ' = \beta \end{equation} This is the same as the initial angle in the water frame. After boosting back to the lab frame we should get back the same perpendicular light arrow. In total the journey of the light should take the form, 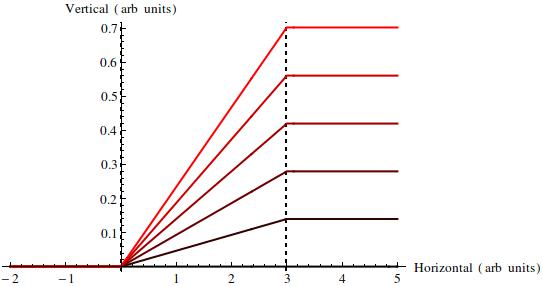 where the shade of red is proportional to the speed of the river, the lightest being $0.1c$ and the darkest being $0$.

As we would expect in the limit that $\beta\rightarrow 0 $ the refraction effect goes to zero and we note that the effect is only significant for huge river speeds.

The correct scenario here would be B.

When two mediums are in relative motion, the angle of incidence would not be equal in the rest frames of both the mediums due to aberration requiring a modification in Snell's law. You can look here for a fairly detailed derivation of the special relativistic Snell's law which is $$(1+\beta^2\Psi_r)n_i\mathrm{sin}\ \theta_i=\frac{n_r\mathrm{sin}\ \theta_r}{\sqrt{1+\beta^2\Psi_r\mathrm{cos^2}\ \theta_r}}+\beta\Psi_r$$ where $$\Psi_k = \frac{1-n_k^2}{1-\beta^2}$$ and the indices $i$ and $r$ refer to the mediums of incidence and refraction respectively, $\theta$ is the corresponding angle, $n$ is the refractive index of a medium and $\beta=\frac{v}{c}$ where $v$ is the relative speed of the mediums. As a result, the angle of refraction $\theta_r$ can be non-zero for a zero angle of incidence $\theta_i$ when the mediums are in relative motion.

We can insert this $\theta'_r$ into the relativistic Snell's law to find the angle of emittance $\theta'_e$ in the moving frame for refraction at the second interface. Applying the relativistic aberration formula again on this $\theta'_e$ would produce the angle of emittance $\theta_e$ in the stationary frame. As $\theta'_e=\theta'_i$, because of applying the aberration transformation in the same medium would imply that $\theta_e=\theta_i$, hence the emitted light path would be parallel to the incident light path in both frames.

The correct answer is B as stated in some of the previous answers. This effect is called the photon drag effect. According to this[1] Science paper (pdf here)

This phenomenon was first considered by Fresnel in 1818 and then, for the longitudinal case, verified [experimentally] by Fizeau (1859), who used water flowing along the light paths within an interferometer as a means of introducing a phase shift.

The transverse drag effect was later verified experimentally by passing light through the edge of a spinning glass plate causing a transverse displacement of the beam[2].

In addition [1] showed that an image propagating through a spinning medium will be rotated. This effect was amplified by the fact that spinning medium was a slow light medium which slowed the light down (thus increasing the effect) by roughly a factor of a million $(10^6)$. An image from the paper is shown below. 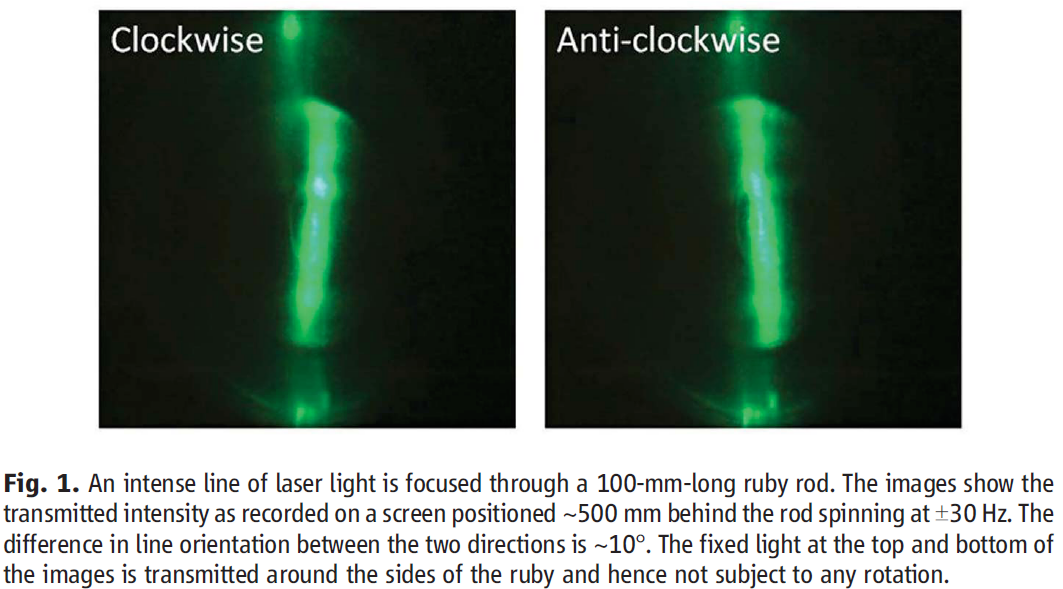 According to me, the path c is correct. The movement of medium should not affect the speed of light and hence path of light. This sort of light-dragging effect was considered in the case of aether hypothesis proposed by physicists in 19th century. It was discarded by Michelson-Morley experiment. And later, special theory of relativity discarded the possibility of the dragging effects as well.

For more discussion, you can read this

Not the answer you're looking for? Browse other questions tagged optics electromagnetic-radiation visible-light laser or ask your own question.

10
How can radiation be a transverse wave? Does light really resemble a rope? How can a 3D field be a medium for non-spatial 1D waves? Need mental model
0
How do we handle waves in a system with a high degree of inhomogeneity?
1
What is the difference between horizontally/vertically polarized light and s/p polarized light?
0
Dielectric constant change in the atmosphere?
3
Why is there only ONE transmitted wave and ONE reflected wave?
9
How can internal reflection occur in a rainbow if the angle is less than the critical angle?
2
Does light travel in a straight line from a third observer's view?
0
Why are the peaks in a two-slit light experiment static?
0
Refraction of light from the earths atmosphere