Why does earth have a minimum orbital period?

So 85 minutes is approximately the minimum time for a satellite to orbit the Earth. Why can't it just go faster to take less time? Would that mean it would fall out of orbit?

Following the same orbit at greater velocity would mean that the satellite has greater acceleration (its velocity is changing at a greater rate than if it follows the same route more slowly). But the only force acting on it is earth's gravity, which creates a particular acceleration at any given altitude above the earth. It can't go any faster or slower unless it can apply another force.

So fuel permitting, a satellite could circle the earth faster, by applying additional force directed towards the earth. It could go slower with a force directed away from the earth. This isn't an "orbit" in the usual sense, since it's powered. If you want to travel using only gravity, then you go at the speed gravity takes you.

Faster speeds are for lower orbits. The lowest orbits are just above the atmosphere. These are also the shortest distance, and therefore shortest time.

In figure A the satellite is orbiting in a circular orbit. By the satellite increasing speed it would turn the orbit into a more egg shaped orbit as shown in B. This would rather increase the time for orbit revolution rather than decreasing it

Having a larger orbit as shown in D would cause the satellite's velocity to decrease as well as the orbit revolution time to increase. 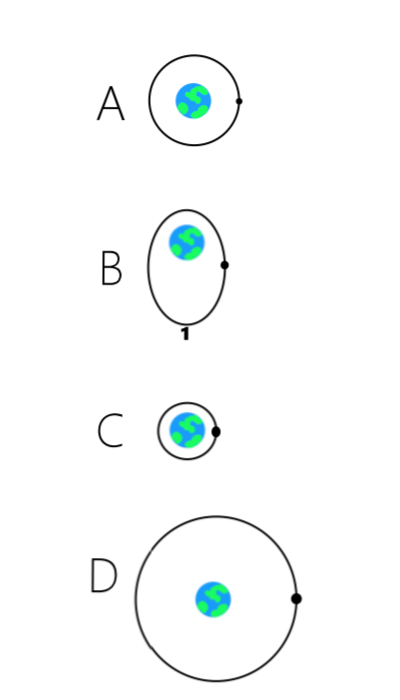 16
Why are these periods the same: a low earth orbit and oscillations through the center of the earth?

3
Determine orbital position after change in velocity
2
By what factor a planet travels (in circular orbit) faster than another
0
Newton's gravity formulas for ellipses
4
Time spent in eclipse of an object
5
Satellite in Elliptical orbit
7
Kepler's 3rd law: ratios don't fit data
10
How does a satellite maintain circular orbit?