Why do two bodies of different masses fall at the same rate (in the absence of air resistance)?

I'm far from being a physics expert and figured this would be a good place to ask a beginner question that has been confusing me for some time.

According to Galileo, two bodies of different masses, dropped from the same height, will touch the floor at the same time in the absence of air resistance.

BUT Newton's second law states that $a = F/m$, with $a$ the acceleration of a particle, $m$ its mass and $F$ the sum of forces applied to it.

Can someone explain this to me? I feel pretty dumb right now :)

gravity acts on a body with mass m with

and this is true for all bodies no matter what the mass is. Since they are accelerated the same and start with the same initial conditions (at rest and dropped from a height h) they will hit the floor at the same time.

This is a peculiar aspect of gravity and underlying this is the equality of inertial mass and gravitational mass (here only the ratio must be the same for this to be true but Einstein later showed that they're really the same, i.e. the ratio is 1)

Consequently, the acceleration is $a=\frac{F}{m}=\frac{GM}{R^2}$, which is independent of the mass of the object. Hence any two objects that are subject only to the force of gravity will fall with the same acceleration and hence they will hit the ground at the same time.

What I think you were missing is that the force $F$ on the two bodies is not the same, but the accelerations are the same.

There are two ways that mass could effect the time of impact:

(1) An object which is very massive has a stronger attraction to the earth. Logically, this might make the object fall faster and so reach the ground sooner.

The miracle is that in the world we live in, these two effects exactly balance and so the heavier mass reaches the ground at the same time.

Now let me give a simple explanation for why it's natural that this comes about. Suppose we have two very heavy masses. If we drop them separately they take some time T to fall. On the other hand, if we attach them together, will they take the same length of time? Think about a sphere split into two halves: 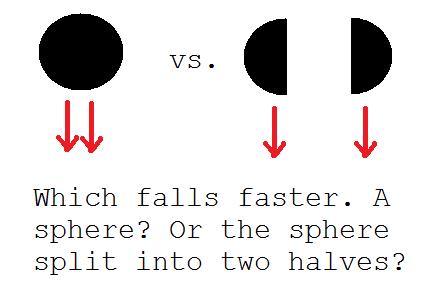 Two two halves of the sphere would fall at the same speed as each other. So if you dropped them next to each other, they'd fall together. And dropping them next to each other isn't going to be any different from screwing them together and dropping them together. That is, there won't be any force on the screws. So the combined (or screwed together) sphere has to fall at the same rate as the split sphere.

Because force 'pushing' object closer to earth is proportionally bigger for 'heavier' object. But heavier object is also have higher gravitation force.

So these two factors perfectly compensate each other: Yes you need more force for a set acceleration, but more force is here due to heavier mass.

So, most people think $M_1$ should accelerate much faster than $m_2$

Therefore the acceleration is independent of the masses we drop, and is a constant.

EDIT Bother, by the time I had written this down, it was answered, obviously the other authors had a different acceleration in their typing.

Let us think about this by contradiction.

Solution #1. if you tie the masses together, they form a even larger mass, thus they fall faster

Solution #2. if you tie the masses together, the lighter mass will give the heavier mass a drag force, thus they fall slower.

The two solutions contradict each other; so they must fall at the same rate.

Not the answer you're looking for? Browse other questions tagged newtonian-mechanics newtonian-gravity mass acceleration free-fall or ask your own question.

2
Free fall of two spheres made of same materials, different masses, with air resistance
9
How did Newton find out force has something to do with acceleration?
9
Terminal velocity of two equally shaped/sized objects with different masses?
1
Two bodies of equal mass thrown from a height-Practical physics question
1
Dropping Objects of Different Masses