What limitations are there in measuring physical properties accurately?

In a StackOverflow answer, I attempted to explain why a 32-bit float was perfectly adequate for representing the questioner's weight measurement:

Consequently, all that anyone can ever say about a physical property is that we have a certain degree of confidence that its true value lies within a certain interval: so, whereas your question gives an example weight of "5 lbs 6.2 oz", what you will actually have is something about which you're, say, 99.9% confident that its weight lies between 5 lbs 6.15 oz and 5 lbs 6.25 oz.

Seen in this context, the approximations of a 32-bit float don't become even slightly significant until one requires extraordinarily high accuracy (relative to the scale of one's values). We're talking the sort of accuracy demanded by astronomers and nuclear physicists.

But something about this has been bugging me and I can't quite put my finger on what it is. I know that it's completely unimportant for the purposes of that StackOverflow answer, but I am curious:

I decided to remove from my original answer this rant about physical measurement, since it was pretty tangental to the purpose of that question. Nevertheless, I am curious to find a good answer to this question.

For point 1) you are correct no instrument can be precisely calibrated or has infinite precision. This is in part limited by how well the corresponding SI units are known NPL has a nice little faq on this. Similarly all measurements will have some noise (possibly very small) which limit precision.

Personally I wouldn't use weight as an example. There are several reasons. Firstly as you point out it is easy to confuse ideas of mass and weight. If you want to be completely correct this is a confusion you don't need. Another concern is that mass is currently the only fundamental unit that is still defined by a physical artifact (the standard kilogram) rather than by physical constants so the definition of a kilogram is pretty uncertain.

In my opinion a better example would be measuring a metre. A metre is defined as "the length of the path travelled by light in vacuum during a time interval of 1/299,792,458 of a second.". Now the question becomes how good is your clock. Now I'm going to use an atomic clock which is accurate to $1$ in $10^{14}$, but this clearly has some small uncertainty. In reality you probably don't use something this accurate but something which has been calibrated against something that's calibrated like this and so will be much less accurate.

As a side note this is not how a metre is actually calibrated, people actually use things like a frequency stabilised laser, which has a very well known wavelength, and an interferometer to count the fringes seen over a distance.

For 2) I don't think you need to say any more. There are lots of things you could say but you are trying to answer a specific question, not write a book. The NPL:begginers guide to uncertainty of measurement provides a good introduction to some of the topics, but iss by no means comprehensive.

For 3) I would say your analogy isn't far wrong. Its only really scientists that care about this sort of accuracy. Possibly also anyone involved in micro-manufacture, think Intel. Even most engineers don't care (they tend to double stuff just to be certain ;) ). I think the best way to show it is to do hat you did in your actual answer and give this as a percentage error to show how small it actually is.

I think a good example of a measurement that is accurate to more than 32 bits, and is at least related to weight, would be

The reference explains that over 635,000 positional observations of planets and spacecraft, mostly using radio techniques were considered in the calculations.

But more to the specific question of measuring weight, the current limit of accuracy for a Watt Balance is about 1 part in $10^8$. I don't think referring to variations in gravity is relavent, because a measurement can be made against a standard mass such as a standard kilogram. If the standard and sample are on the same instrument, local gravity variation is canceled out. The relavent issue, especially as long as the kilogram is defined to be a particular metal object, is how accurately can we compare a sample to a standard. So if 1 part in $10^8$ is the current technological limit, 32-bit is still enough, but not overwhelmingly so.

I mentioned this in the comments, but I thought it probably deserves highlighting as an answer to the question asked in the title. The problem with weight measurement is quite complex and NIST has struggled with it for over a century.

In 1889 a 1kg polished sample was made along with duplicates, carefully weighed and then stored. It was considered so fragile that it has only been weighed 3 times in 120 years, 1889, 1946 and 1989. And it was discovered to be lighter than it's duplicates.

Over 120 years it lost $50\mu g$. This started a quest to find a way to measure 1kg in planks. Along came the Watt Balance which can relate the 1kg back to the plank constant. The scale is so sensitive that it can detect changes as small as $10\mu g$.

When making this 1kg measurement the uncertainty is estimated using

Which according to their study is about $14\mu g$

When applying this to calibrating to multiples and sub-multiples you can see the uncertainty relative to the mass. 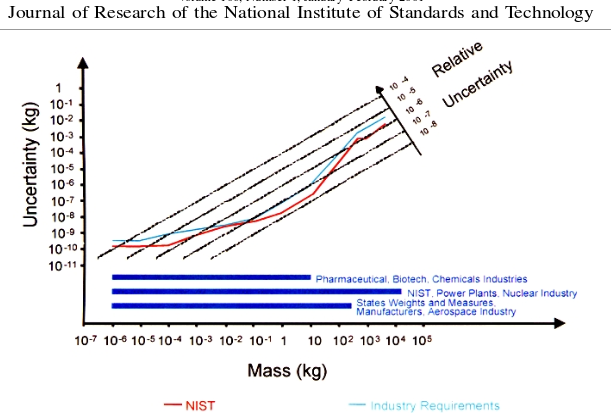 Not the answer you're looking for? Browse other questions tagged gravity experimental-physics computational-physics error-analysis weight or ask your own question.

1
Measuring a fluctuating quantity: Instrument error vs. uncertainty, or both?
1
Uncertainty of approximately sinusoidal voltage measurement
2
Do we regularly measure and update our physical constants (By using the LHC)?
0
What is the proper way to combine two different errors for the same measurement?
0
Calculating errors from given graphs
0
How do you combine the errors resulting from measuring one instrument with another?