Which clock is the fastest inside an accelerating body?

The picture shows an accelerating spaceship with two clocks inside it. It is so far away from all other bodys that gravity is of no importance.

Will the bottommost clock be slower than the topmost one? Or will both clocks have the same speed? 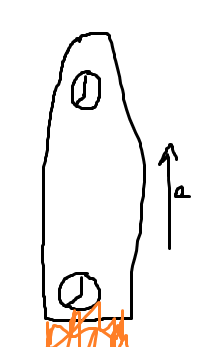 The bottom clock will run slower than the top clock.

We can use this to calculate the gravitational time dilation between the clocks because to a first approximation the relative time dilation is given by:

Let's do this calculation for an acceleration of $1g$ and a rocket length of $100$ m. We're taking the upward direction as positive, which means the acceleration is negative because it points down. The relative time is:

The ratio is possibly better written as $1 + 10^{-14}$ i.e. there are thirteen zeros after the decimal point. This is an extraordinarily small effect, but it can be measured. Indeed it was measured by the Pound-Rebka experiment.

If both clocks have the same proper acceleration, the clocks will run at the same rate but the distance between the clocks, according to either clock, will increase; the rocket would necessarily have to stretch.

From the above linked article:

It follows that if a rod is accelerated by some external force applied anywhere along its length, the elements of matter in various different places in the rod cannot all feel the same magnitude of acceleration if the rod is not to extend without bound and ultimately break.

Again, as far as I know, this is uncontroversial and quite easy to show.

As usual, a spacetime diagram is helpful: 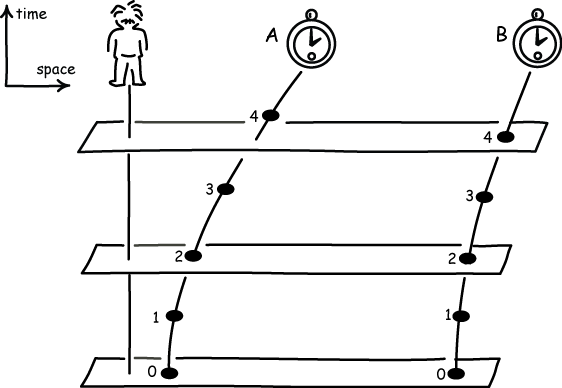 Plotted are portions of the worldlines of two clocks with uniform proper acceleration to the right.

Now, according to either clock, the distance between the two clocks is constant (both clocks have constant Rindler spatial coordinate).

And, indeed, we see that clock A is running more slowly than clock B.

To summarize these results as it relates to the OP's question, implicit in the question is the assumption that, according to either clock within the rocket, the distance between the clocks is constant.

What has been shown is that

(1) if the distance between the clocks, according to either clock, is constant

(3) then, the two accelerometers must read different accelerations.

This is a straightforward result from SR. Whether this is, in fact, the correct description of world is, of course, a matter of experiment. But, what SR predicts is unambiguous.

One final note: once acceleration is introduced into SR, one must be particularly careful about the concepts of acceleration and distance.

Further, there are different notions of distance between observers with uniform proper acceleration. There are, for example, the notions of ruler distance and radar distance.

So, when thinking clearly about an acceleration thought experiment in SR, one must be careful to unambiguously specify the problem.

For example, if one says that two clocks have the same acceleration, it isn't clear if one means the same proper acceleration or the same coordinate acceleration. The answer one gets from SR crucially depends on the difference.

If you consider your rocket a rigid body*, than at all times all points on and in it will experience exactly the same acceleration. Therefore there is no difference between the two clocks that might be the source of the difference of the rates of these clocks.

*I said "if ...", but Alfred Centauri opposed in his comment that nothing can be transmitted instantaneously, so there must be some differences in accelerations. Well ... yes, true... But then, let's think about it for a moment ...

One last note: Should someone claim there are different phenomena due to acceleration in SR, and therefore accelerations throughout the spaceship do differ, one needs to remember that SR assumes inertial frames. There are claims, however, that it can be proven that accelerations are easily handled by SR. Well, I have shown in my answer here, how it is being achieved through mere sleigh of hand.

Should somebody still feel unconvinced, I will remind you, that SR says that within the moving frame no changes due to speed are showing. That all “strange” phenomena are visible by the outside observer only – through comparison. And here I'm going to hear the objection that this claim pertains to inertial frames only. Sure it does – and so does the whole Special Relativity. Which takes us back to the link above where I showed that one cannot derive equations for SR only to discard the axioms these equations are rooted in.

So, it is not that SR claims certain things about acceleration. It is simply certain people who claim SR claims these things.

Not the answer you're looking for? Browse other questions tagged special-relativity reference-frames acceleration observers rocket-science or ask your own question.

1
Time dilation in a space craft and at high altitudes
0
Two synchronised clocks accelerated perpendicular to Earth's gravitational field
49
How is the classical twin paradox resolved?
4
Proper time for an accelerating object
10
Special relativity paradox and gravitation/acceleration equivalence
2
Must all types of clocks agree on the time that has passed since the spaceship started accelerating?
2
Does non-uniform acceleration imply non-synchronizability?
0
Understanding the spacetime diagram for an accelerated observer moving farther away
0
How should I interpret this relativity scenario?

0
SR time dilation
6
How do I know which observer is running the time faster or slower?
3
Explanation for a much simpler version of the twin paradox?
0
Can't reach speed of light, but relative to who?
0
What is the apparent time of a clock moving x-wise at 0.5c for an observer moving -x-wise at 0.5c?
1
Physical interpretation of special relativity?
0
Why does accelerating break the synchrony between two clocks?
0
Time dilation & Pions - Why Both Stationary and Moving Pions Should not See the Same Result?
1
Understanding two instances of different time dilation