Geostationary orbit and rotation speed of a planet

Assume for planets similar to Earth but with different rotation speeds (including zero), and we put a satellites at altitude of 35 786 km/hr (similar to the Geostationary orbit or earth), with speed 11 068 km/hr, similar to the speed of communication satellites. these satellites, can rotate around the center point of the planets at any direction regardless of it's rotation axis, as long as it's perpendicular to the line from it's center and the planet center.

For any planet, if we consider it as the reference point (we will exclude the rotation speed), it has multiple satellites at same altitude but with different speed but they don't fall. How is that possible? or we should consider another reference point, with absolute zero of speed and rotation, which does not exist? or there is another factor missing?

rephrasing: I put an assumption that the planets are similar to earth to ease calculation

The satellite at orbital speed of 11 068 km/hr, can rotate around the planet in any direction as in the image 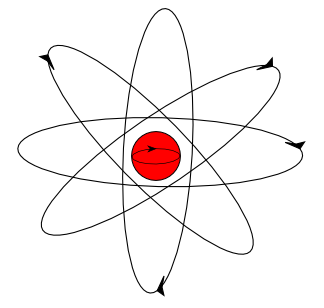 . it doesn't have to be around equator. only the one around the equator, will look as fixed in the space.

My question is about the orbital speed, why at the same altitude, we can have multiple satellite, at different speed relative to earth.

Also, satellites miss each other because of their position in their orbits. The satellites are positioned so that they don't collide.

A satellite goes around the Earth in an elliptical orbit. It is nice to arrange the orbit so that it matches to rotation of the earth, and the satellite stays above the same spot of the Earth's surface. It is possible to choose a special orbit that does this.

First a circle is a special case of an ellipse. If we choose a circular orbit, the satellite will always stay at the same altitude.

Next the orbit must in the plane of the equator. Otherwise, half of the orbit will be north of the equator and the other half south. This orbit does not stay above the same point of the Earth's surface.

It is possible to do this by choosing the altitude of the orbit. Lower altitudes have a shorter orbital period. Most satellites are 100 miles or so above the surface. Just high enough to avoid the last whisps of atmosphere. These satellites orbit every hour or so.

The moon is much higher - about 239,000 miles up. Its orbital period is almost a month.

For other planets, you can make the same choices.

For a circular orbit, the speed and altitude are constant. Speed can be calculated from the altitude.

But for elliptical orbits, speed and altitude change along the orbit. Speed is fastest at the lowest point. You could choose different elliptical orbits where the speeds are different at the same altitude. I am not sure if that is what you are asking about.

multiple satellites at same altitude but with different speed but they don't fall. How is that possible?

Not the answer you're looking for? Browse other questions tagged orbital-motion planets rotation speed or ask your own question.

3
Is it possible to orbit the sun next to Earth?
6
Correlation between speed, distance, mass, etc between a planet and a star (or moon and planet)?
37
Why don't planets have Circular orbits?
7
When can a natural satellite be in polar orbit around it's primary?
0
Why the Moon does not change its orbit from Earth to an another planet?
0
Orbital speed for an inclined circular orbit round a spinning spherical planet
1
What is orbit that could place satellite to be always under the Sun?