Is this webcomic accurate?

I was considering this xkcd comic from 5/10/14, with the alt-text "Trains rotate the Earth around various axes while elevators shift its position in space." I'm wondering about its accuracy. 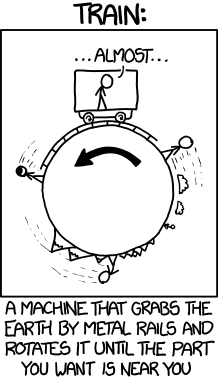 I first considered the elevator scenario. As the elevator accelerates (to start or stop its motion), the occupants feel a fictitious force, demonstrating conclusively that it is the elevator and not the planet which is in motion. By this argument, an elevator is fundamentally different from a device which physically displaces the planet. Similarly, I suspect that a train doesn't "rotate the Earth," since such a rotation would be felt by occupants on Earth as an angular or centripetal acceleration. Any observer can conclude definitively that it is the train which is in motion around the Earth, not the Earth rotating under the train.

For this reason, is the comic is not strictly correct?

(Note that there is a minimal motion of the Earth resulting from the action-reaction force pair between the train and the planet, but it's safe to say that this motion is negligible relative to the distance traveled by the train, since $I_{earth} \gg I_{train}$.)

The comic is making a joke out of reference frames, it is making no such remark about the accuracy of the physical statement that "trains rotate earth."

If trains did rotate earth, then two trains coming at each other at the same time would cause earth to stop rotating. However, in your own personal reference frame, the train appears to rotate earth as you travel from point A to point B (because you are always the stationary observer). And that is the joke the comic is making.

While I don't disagree with either of the two existing posters the comic can be interpreted literaly and be correct. However, the motions are ...

You answered your own question. In order for the comic to be correct, $I_{train} >> I_{earth}$.

Not the answer you're looking for? Browse other questions tagged reference-frames coordinate-systems or ask your own question.

5
What provides the centrifugal force for planets orbiting a star?
1
Does $dr/dt$ have any physical meaning in this context?
4
Is this spacetime diagram for the twins paradox correct?
0
What is the accurate description of the following rotating system?
2
Is this a coordinate transfomation?
3
Will an object dropped from a high building displace due to the Earth's rotation?
0
Are Newton's equations accurate on Earth when we ignore fictitious forces?